Backroads Buildings: In Search of the Vernacular 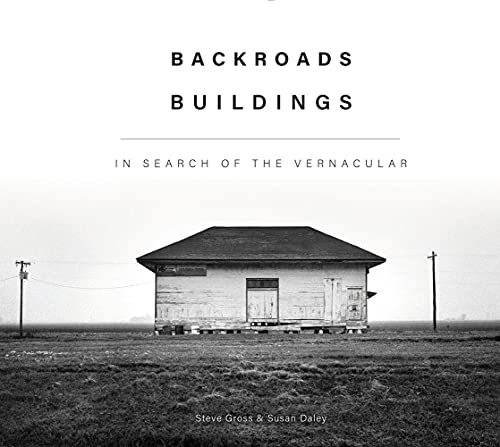 Somewhere in America, right now, there's a guy who's been living in a forest for his tenth or twentieth year, and he sleeps when it gets dark and wakes when it gets light and smells terrible. He has no idea that this is a terrible year and he's supposed to be awfully unhappy. This book is for him. Somebody print out this review, strap it to a raccoon, and launch it his way.

This review is long overdue—the book was released in March 2021— but so too was the book long overdue, just as our mythical man of the mountains is long overdue, the way a book itself might be overdue: it is the way you might take out a copy of Curious George from your childhood library, forget to return it, and not know that it’s accruing one fee after another for decades until the library, like you, decides to dismiss the affair entirely.

Backroads Buildings: In Search of the Vernacular is clearly not the book that Gross and Daley set out to make, and it’s just as clearly cobbled together from secondary images made while sidetracked on or from their various assignments in their long editorial career. It is the sort of thing that all photographers know keenly; you might set out to make pictures of the present and turn down some rolling road and find out that your Hyundai is a time machine, that you and your wife are time travelers, or that, more plainly, you’ve arrived in a place where time kept moving even as the town remained behind.

There are many sins in this book, almost all in production rather than thesis. It yearns for a better title. It features many locations well-known to photographers of all stripes from so many daytime somnabulations around the continent. It disobeys a consistent and prime rule of photographic curation, mixing monotone and color images in a way that ensures each confounds the other.

But it endears in many other ways, and their America is in many ways like Gauguin’s Tahiti: He crossed a world to find a place born from his myths and found that time had kept moving even as his memory remained behind. Here we find the sepia-toned America that we’re told was once great, but in reality is little more than cracked murals, broken floorboards, rusted iron shoehorned between an endless sea of chain stores and chain smokers, charmless and less ethereal.

These photographs are as much of the places we point at as they are of us. Perhaps the title is not so bad, after all: maybe we are the back roads. Maybe we are the vernacular.