The Backlash: Right-Wing Radicals, High-Def Hucksters, and Paranoid Politics in the Age of Obama 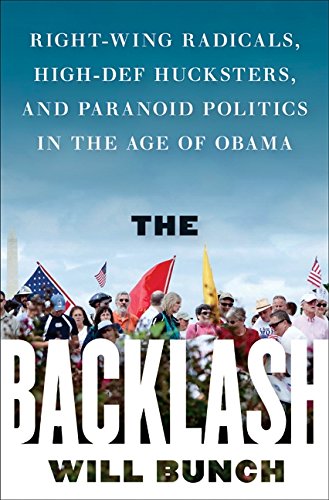 It would be easy to write an Obama-backlash book using buzzwords and cliché ridden accounts of the right-wing talk show blather-babblers.

Fortunately, Will Bunch does not resort to such pedestrian style bloggisms. As an experienced and award winning journalist, Bunch does his homework and reports on what he has learned in this straightforward accounting of the paranoid fringe tilting at delusions of conspiracy.

Stories about the “Oath Keepers,” “Birthers,” the Tea Party, Knob Creek militia, FEMA internment camps, the resurrection of the John Birch Society, and Sarah Palin are all here in Bunch’s over-the-top horrific telling of right-wing populism.

The Backlash goes into the deep background and the bizarre rise of Glenn Beck, the current darling of the Fox News rabid reporters. What is more shocking than Beck’s popularity is the stark indifference of Beck’s handlers to his lack of proficiency as a newscaster or that he has a passing relationship with the truth.

Beck’s raw ambition got him into radio when was only 13 years old in Seattle, WA, where he had an on-air job at an FM station doing the overnight shift on weekends. From that first job he never left radio and moved from one station to the next, immediately after high school.

Bunch tells Beck’s story in a series of personal and professional vignettes mixing his failed personal life with ever-increasing success as a radio personality. His self-styled showmanship was modeled after a format called the “Morning Zoo.” It was a mid-1980s drive-time fast-paced show with skits, parody songs, and caricatures. Beck was riding high in the jocular, content-free teenybopper radio-land for while, but his lack of discipline got him into trouble more than once.

“An admitted sufferer from attention-deficit disorder, Beck clearly struggles with impulse control even after he finally stopped drinking and doing drugs in 1994 with the help of a then-friend, Senator Joe Lieberman,” Bunch wrote.

Beck’s troubles began long before his attempt at recovery as Bunch describes Beck’s downfall both in his personal and professional life. “This was especially true in the late 1980s in Phoenix when, desperate to get his Morning Zoo out of a deep ratings rut, he staged a series of inane pranks against the show’s number-one drive-time rival—crashing the wedding of its program director to plaster his own show’s bumper stickers on the bridal car, and finally, unbelievably, calling the wife of his rival deejay to make fun of . . . her recent miscarriage.”

Bunch weaves Beck throughout the entire book as a backdrop for the many right-wing organizations and events dotting the country.

In his report on the Tea Party Convention, he reveals that the event planners tried to paint the Tea Party as saving the country for the poor, oppressed, unemployed, retired, and small business owners. It failed miserably in trying to make the case it was the right-wing baby boomers’ Woodstock—while charging attendees $549 a ticket. It was in fact the fundraising scheme of a small-time lawyer, Judson Phillips, just one of many who took advantage of the many Tea Party believers eager to buy a piece of the myth.

As Glenn Beck and Sarah Palin stump for the little guy, both are fanatically exploiting their celebrity by raking in hundreds of thousands of dollars for speaking engagements to the unemployed faithful, while offering no solace to those unable to pay their utility bills—but quick to blame Obama.

The Tea Party convention itself became so controversial that Michele Bachmann and Marcia Blackburn, two right-wing congresswomen, canceled their appearances, as did American Majority president, Ned Ryun. Bunch quotes Ryun as telling the media, “Listen, I’m all for a person making a buck, but this seems very crass, very opportunistic.”

In a philosophic bent, Bunch refers to Neil Postman’s prophetic book, Amusing Ourselves to Death: Public Discourse in the Age of Show Business, to illustrate the obvious of how television is doing our thinking for us, and how “people medicate themselves into bliss,” according to Postman, by believing anything they see and hear on television, as evidenced by the fiction that is accepted as fact on Fox news.

The Backlash is disturbing in that it validates what we don’t want to believe, and that is: while “fake news” began as a parody on the Comedy Channel’s Daily Show with Jon Stewart, Fox News has become reality as the most widely watched news show in the country.

If you are looking for an answer or some solace to the disconcerting uneasiness that the Glenn Becks of the world are multiplying, you won’t find it in the The Backlash. Bunch is just reporting here and offers no predictions of whether this marginal world of extremists will succeed in taking over the White House or Congress. He offers no philosophical musings beyond the Huxleyan references to what the deliberate manufacturing of falsehood is doing to our lives.

Yet, like Bunch’s excellent previous book, Tear Down This Myth: The Right-Wing Distortion of the Reagan Legacy, The Backlash is a must-read for those who want to understand what is happening on the political scene and seek a context behind the doctrine of fear and hate.