Back to Japan: The Life and Art of Master Kimono Painter Kunihiko Moriguchi 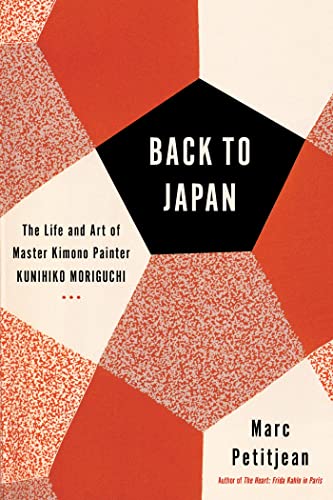 In this quick and light read, Petitjean is simple and straight forward in his thesis. Fascinated by the Japanese notion of a “Living National Treasure,” Back to Japan is directed at two questions: “How did the commissioners for a tradition-based concept of Japanese culture justify [Kunihiko Moriguchi’s] fusion of ancient and modern, Western and Japanese culture? And on a more personal level, how had Moriguchi carved out this niche between these two worlds?”

A Living National Treasure is a title bestowed upon an individual who represents the highest level of skill and mastery over an art form that is considered quintessentially Japanese. In Moriguchi’s case, the art form is yuzen, a fabric dying tradition that began in the Edo period (1603–1867) and is used in the making of kimonos.

The concept of Living National Treasure began in 1868 when Japan became open to outside influences. It was seen as a way to preserve Japanese culture and honor their heritage ,which was under threat by Western development. The title appeared in a law in 1897, at first protecting sanctuaries, temples, and monuments. It was then extended to include the concept of tangible and intangible culture during the occupation after World War II.

There are approximately 100 artists named as Living National Treasures recognized as “Preservers of Important Intangible Cultural Properties.” From doll-making to woodwork, Kabuki and Bunraku, and in Moriguchi’s example, textiles, these artists are awarded a stipend to pursue their craft and train apprentices to continue the lineage. The lineage means everything to the Japanese and this honor is not to be taken lightly. It is not a frivolous award to be set idle on a shelf, but a responsibility laden with meaning, scrutiny, and expectation.

Back to Japan hammers home this message of honor and lineage over and over. Rules, requirements, and precision are paramount and must be held to the highest standards. The way of life of a kimono studio was also a way of life for the family of the master kimono maker. The household as well was required to adhere to the traditional roles of men and women, father and son, master and apprentice. Tradition, tradition, tradition. If it weren’t so blatantly a Japanese setting, one could almost hear Tevye the Milkman bellowing out his refrain in rural Anatevka.

Which is why Petitjean’s two questions are pertinent. Clearly a Living National Treasure must continue the same old track as always, right? It logically follows suit. And in some ways, the Moriguchi story adheres to this pattern quite strictly. After all, Moriguchi was indeed raised in this very traditional method, so highly prized. Moriguchi’s father was himself a master kimono painter with the title of Living National Treasure. It was Moriguchi’s birthright to inherit the works, both studio and title, upon the death of his father.

Kunihiko Moriguchi was born in 1941 in Kyoto in the midst of wartime restrictions, rations, and occupations. He learned his father’s business by living in the middle of it day after day, helping to run the workshop as he grew. After graduating from the Kyoto City University of Arts in 1963, Moriguchi set sail to Paris, France, to study at the Ecole des Artes Decoratifs on a scholarship. His eye-opening education of the “modern” world and French fine art lasted until 1966 when he had to make a cross-roads decision: stay in France with all the freedoms or return to the confining traditions of his Japanese heritage.

At first Moriguchi stayed in Europe. He was befriended by the French artist Balthus (1908–2001) who served as surrogate father and mentor to Moriguchi over the span of several years. Balthus ran the Villa Medici in Rome and invited Moriguchi to live with him at the Villa, which Moriguchi accepted. It would be only a few months before Moriguchi returned to Japan but during that time, he was able to relax, retreat, refresh, and refine his desires and directions for his future. In essence, Moriguchi thought he could make a go at running the kimono workshop if his father would allow him to make his own designs and make a name for himself.

It was the progressive thinking of Moriguchi the Elder which consented to give Moriguchi the Younger his blessing to pursue his own personal artistic path under the protection and prestige of the Moriguchi name. In this case, it was yuzen technique that mattered, not design. This critical distinction—new design, old technique—is what allowed the next generation of Moriguchi to thrive as an artist and make the kimono workshop his own. He was so successful that he was awarded the honor of Living National Treasure on his own merits, while his father was still living, and not a result of inheritance of the title.

In this snippet of a book, so short it could be counted as a final paper in a college art history semester course, Petitjean bounces around between his personal experience filming and interviewing Moriguchi in his Japanese realm and recounting the biographical information about Moriguchi Senior and old-world Japanese culture. It is confusing at times for the reader to follow which Moriguchi is being retold.

Sadly, there is very little in the way of the art of kimono making. We learn nothing other than the workshop was strictly run and was part of the traditional household. This was a bit of a disappointment. Also, the handful of images are diminutive black and white photos, belying the opulence and grandeur of these museum-worthy pieces. While Back to Japan is easy to read, its substance feels elementary.