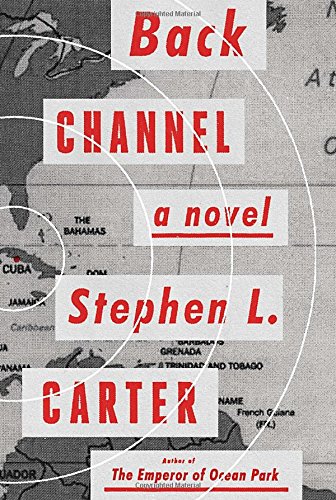 “Although Back Channel is about thwarting the Cuban Missile Crisis, it is also about Margo navigating U.S. racial dynamics of the 1960s.”

Stephen L. Carter’s Back Channel takes readers on a “bizarre concatenation of circumstances” that lead to a 19-year-old black college student serving as the back channel for high stakes negotiations during the Cuban Missile Crisis.

Stephen L. Carter’s suspenseful novel will have readers burning the midnight oil to discover how the nuclear crisis is avoided. Because the novel is based on an historical event, the real question is not will nuclear war be avoided but how.

Back Channel is a tightly woven set of plots and counterplots set in motion by both the U.S. and the Soviet Union replete with spies, agents, and double agents. So how does a Cornell undergraduate get involved in the inner workings of her government?

As it turns out, Margo Jensen is no ordinary undergraduate. She is an A student majoring in government at Cornell, but her past makes her attractive to those who recruit her to serve as a conduit of information between the Soviet Union and President Kennedy. Readers will enjoy following the gutsy Miss Jensen as she navigates increasingly dangerous terrain, but even more intriguing is the unveiling of her family’s past.

When a high-ranking Soviet intelligence official selects her as his intermediary, Margo tells Colonel Fomin that he has the wrong girl, but Fomin tells her, “‘It is difficult to trust someone not raised to doctrine, but you seem quite unsullied by bourgeois so-called freedom. You are young. You are of an oppressed minority. You are not part of the ruling class, despite your ambition.’”

Although a black girl seems like the most unlikely selection for such an assignment, Margo’s race, gender, and youth all serve as part of her cover. Thus while the public speculates about yet another presidential dalliance, Margo is actually engaged in a covert mission.

In his historical note and acknowledgments, author Carter notes that the real back channel was John Scali of ABC News—nothing like Carter’s 19-year-old black undergraduate; however, Back Channel is a work of fiction and changing details such as these not only allows Carter’s imagination to run free, but also allows for subtle reflections about racial dynamics.

Margo Jensen is presented as a smart and successful young woman, but her place in society is regularly challenged as illustrated by her classmate’s laughter in response to another classmate’s humiliating poem about Margo. “Getting straight A’s didn’t help her escape the demons who pursued her, and she had a hunch that helping to save the world wouldn’t either.” Although Back Channel is about thwarting the Cuban Missile Crisis, it is also about Margo navigating U.S. racial dynamics of the 1960s.

Margo’s assignment is presented as sunning on beaches and having a few meals, but she faces arrest, kidnapping, and the threat of bodily harm. She goes missing more than once as she deals with attempts on her life and tries to determine the source of the leak and who she can trust. Carter builds suspense as the reader also tries to ascertain the rogue agents. Just as Margo’s cover story is a fiction, so much is not as it seems.

One might think that a college sophomore would be over her head in such an environment. Yet time and again readers witness Margo drawing on her superior intellect to get out of a jam.

For example, when she is cut off from her contacts, Margo does not give up, but instead recognizes that she has other avenues: “Her mind, on the other hand, was always available. She could think her way out.”

Margo regularly surprises her enemies as she draws on her conflict theory lessons and natural instincts to outmaneuver trained spies. Carter cleverly develops a subplot regarding Margo’s family history which helps readers suspend disbelief regarding her pluck and luck. Margo may be inexperienced, but her skills are clearly inherited.

Margo Jensen is no ordinary undergraduate.