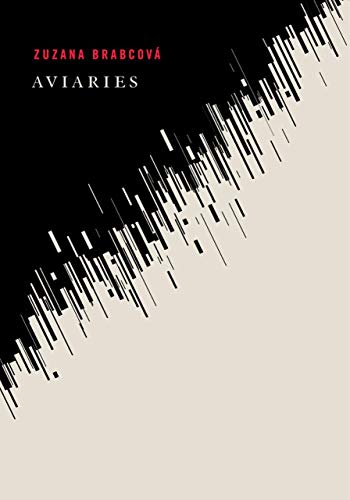 “what is most important about this, the last of Brabcová’s gifts, what makes it deserving of a place in the most minimalist of bookshelves, is its honest, overwhelming beauty, its celebration of language, imagery, and humanity, and its tribute to all of life, observed.”

What does it look like inside a mind ravaged by depression and loneliness? Is there transcendent beauty to be had from the harvesting of such a mind, from the culling of its experience of the most abject poverty and loss of self? In Aviaries, Zuzana Brabcova’s last work before her death in 2016, the Czech writer uses intricate storytelling patterns to credibly recreate her protagonist’s advanced lunacy, her hallucinations, and even her occasional life-saving awareness, while very clearly answering both questions, the latter with a resounding yes.

The novel is composed of the entries in Beta’s diary, begun on December 20, 2011, two days after the death of Václav Havel. The uncertain political scenario lends the tone of improbable hope amidst the dread of reality that matches Beta’s financial, physical, and mental situation, and that is at the center of the story.

“And when I do have to go out, there’s a bloom coating the people I pass, a frost blurring their features. I can imagine they don’t exist, and in this way love them. All that exists just disrupts and mars, as if somebody had graffiti-tagged The Night Watch. Václav Havel died the day before yesterday. In his sleep, in the morning. So its reign extends beyond night.”

Bêta is trying to come to terms with all she has lost. She is basically homeless, a squatter of sorts in heatless rooms in which her ghosts, loved ones past and present, visit her in dreams that read like a succession of beautiful, surrealist short films.

“His buddies started to roar with laughter and scattered across the expanse of the Sacré-Coeur, not caring about the marvelous, unusual view it offered of Prague, a city full of injustice that nobody ever got used to, not the nation, not the private individual. In short, they’d become sour and plunged their arms elbow-deep into garbage cans, and when they pulled them out again, they were the color of melted chocolate.”

Her mind assaulted by regret and loneliness, she’s unable to find her way without the identity she is losing to hunger, age, and illness. And yet she cannot help but love. She cannot help but give of what little she has.

Her story moves forward with glimpses of daughter Alice, who comes to her mother in dreams while dumpster-diving for basic necessities with beau Bob Dylan (“only his parents are to blame for his name”), a lit headlamp her only hat.

“You’re three months old, sleeping in your crib, clutching a rattle in your tiny fist. Andrei is just leaving for his night shift in a boiler room . . . My God, I pray over you, I feel nothing at all. Who are you, you unfathomable creature? Where did you come from? You are a guest. I have given birth to a guest.”

Later, when she dreams Alice needs her and wants to come home, love brings lucidity and the truths of the heart: “‘Return to my belly,’ I requested, ‘I’ve already got Grandma’s grave in my chest.’”

We see Bêta’s selfless love for Melda, a stuttering homeless man she picks up. He builds her a “cardboard palace” that is really a room of cardboard inside the outer cardboard of thinner walls, before leaving her in darkness, colder than before: “This rude stranger for whom I’d bought whatever he pointed to at Tesco just a few days before was now parading around in his grandiose cardboard box butt naked, and the scars that furrowed his body looked like riverbeds through which time streamed instead of water.”

It would be easy to confuse Brabcová’s work with loosely linked ramblings, but that would be a mistake. If we pay attention, readers will discover every clue she deliberately sets up for the finding, the rounding of each story to completion, just not the one we expected.

Aviaries is anchored in history, politics, satire, and humor. Stalin, Mozart, and even Proust lend height and sound to its metaphors. In turn, the news of the day, of every day in every place, lend the dose of reality against which all minds must end their race to feel. But what is most important about this, the last of Brabcová’s gifts, what makes it deserving of a place in the most minimalist of bookshelves, is its honest, overwhelming beauty, its celebration of language, imagery, and humanity, and its tribute to all of life, observed.