Autopsy of an Unwinnable War: Vietnam 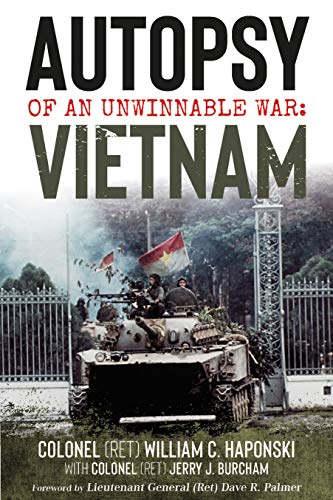 “Students of American history understand the fervor with which the original colonies struggled for independence from England and the zeal with which the Union fought to reunite this country during the Civil War. American military leaders in Vietnam, though, never quite grasped that Ho Chi Minh and the North Vietnamese burned with that same fervor . . .”

For those of a certain age, Vietnam was an unfathomable war. For those of a younger age, Vietnam was a forgettable war. For many who fought in it, Vietnam was a damnable war. But for some of those who fought, it was always an unwinnable war. So says Vietnam veteran Bill Haponski, who served in several cavalry units starting in 1968, in his new book Autopsy of an Unwinnable War: Vietnam. As he sees it, given “the consuming desire for independence [that] had been imbedded in the Vietnamese for two thousand years,” no enemy, not even the most powerful nation in the world, had a chance.

Students of American history understand the fervor with which the original colonies struggled for independence from England and the zeal with which the Union fought to reunite this country during the Civil War. American military leaders in Vietnam, though, never quite grasped that Ho Chi Minh and the North Vietnamese burned with that same fervor and zeal to gain independence and reunify their nation as did the United States in those earlier conflicts.

Instead, the Americans chose to fight a more conventional war, relying on firepower utilizing a strategy known as “search and destroy.” The result was a war of attrition in which body count became the paramount way to keep score. And that, says the author, doomed American efforts, and those of the Chinese, Japanese, and French before them, to failure from the start. “The ‘idea’ that could not be killed by military force was a Vietnamese idea: the yearning of so many of them for independence and unification.”

Autopsy of an Unwinnable War takes the reader back into over 2,000 years of history, then forward to the jungles of southeast Asia in the 20th century. By 1950, with President Truman’s commitment to provide political, military, and economic assistance to the South Vietnamese, as far as Ho Chi Minh was concerned, the Americans had now become the enemy, not the French.

Through a succession of U.S. presidents, from Truman to Kennedy to Johnson to Nixon, the war became increasingly “Americanized.” But fighting a conventional war, claiming victories based on nothing more than body counts from acquiring territory which the enemy often regained, rather than “a defensive-offensive strategy . . . coupled with pacification and Vietnamization” was, in hindsight, a fatal error from the very beginning.

The book eavesdrops on the decision tents of both the Communist forces of “Uncle Ho” and of American commanders bent on a strategy of “big-unit battles,” such as the code-named Cedar Falls and Junction City operations, and the infamous Tet Offensive of 1968. But, the author says, “The jungle did not cooperate. The enemy was no better.”

Although the year-by-year narrative sometimes bogs down in dates and places, the author is at his best when he personalizes and humanizes the horrors of war, such as the story of “a little girl in Binh Co,” terrified of the Americans after her father was killed by an American helicopter gunship.  She reminded Haponski of his own daughter of approximately the same age, and she and her sisters “were to become profoundly important in my life.”

Unlike the breast-beating mea culpas of many Vietnam accounts, the author rationally dissects the strategies and mindsets on both sides to try to figure where, and how, the American military went wrong. Haponski asserts that the war’s fate was settled centuries before this nation got involved, and that no amount of second-guessing was likely to have changed the outcome.

“Ho Chi Minh had indeed tapped into two thousand years of resentment against foreign domination. Not his Communism, but his nationalism, his beliefs and conduct as a revolutionary, allowed him first to inspire, then shape and ultimately control a Vietnam-wide movement that would never give up on its idea of independence and union.”

One wonders whether Uncle Ho borrowed from the same playbooks as those employed by Washington and Lincoln. Even though he did not live to see the outcome, dying of heart failure in 1969, his legacy lived on and his followers ultimately achieved the same result as those American leaders. As the author states in conclusion, “An idea—independence and unity—would triumph over bullets.”