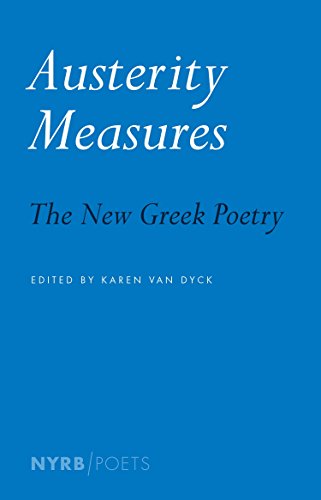 Contemporary Greece stands at the precipice as it recovers from the 2008 currency crisis. The Syrian Civil War has placed Greece as an entry point into Europe. Geopolitics and economic chaos have turned the birthplace of democracy into a stereotype and a punchline. From this torturous situation has arisen a vibrant poetry scene. Austerity Measures: The New Greek Poetry, edited by Karen Van Dyck, attempts to capture the vitality, energy, and talent within the Greek-language poetry scene.

While politics and economics inform the poetry in this anthology, it is not political. As Van Dyck explains in the Introduction, “By expanding its purview to the whole of contemporary Greek poetry, however, and including a much greater proportion of work which doesn’t directly address the political situation, the survey aims to provide deeper and more various answers.” Earlier she tells how the best poetry “offer[s] new ways to imagine what can be radically different realities.”

One of these new poets is Jazra Khaleed. Part of the anti-fascist rap scene in Greece, he lives in Exarchia, “the inner-city Athens neighborhood most associated with protests and police violence.” His poem “Black Lips” vibrates with hip-hop bravado and political awareness:

I don’t have a cent in my heart

or smooth talk and epithets hidden in my pocket

I scatter my beauty on concrete streets

I dip my hands in poets’ blood

I write everything in 9 mm caliber

There’s no one for me to respect

I bear no responsibility

Standing in sharp contrast to Mr. Khaleed’s street poetry is someone like Yannis Stiggas:

Each night I pray

to the eternal hammer

has only one vertebra.

Stiggas’s work has been translated into many languages. His work shows influence of Paul Celan and the Greek poet Katerina Anghelaki-Rooke. Stiggas and others are in the first section of Austerity Measures called “Tradition and the Individual Talent.” The poets included in this section are older and more established. The poetry radiates with a classical coolness. Refined and polished, these poems rise above the political and economic chaos engulfing the region.

Other sections focus on poets in the DIY and online scenes. Some whose work has never appeared in print! In other sections, Van Dyck selects poets who work across different media and poets in the outer provinces.

Each section has a small explanatory paragraph laying out the criteria for selection. The editorial choices can at times feel arbitrary, but when arranging an anthology of such scope cuts will need to be made.

Beyond the obligatory index of first lines, Van Dyck has included sections for further reading and detailed biographies of the translators. Despite whatever inevitable shortcomings occur with a project of this magnitude, New York Review Books Poets has assembled a top-notch volume. This is the anthology to start with.