For Audrey with Love: Audrey Hepburn and Givenchy 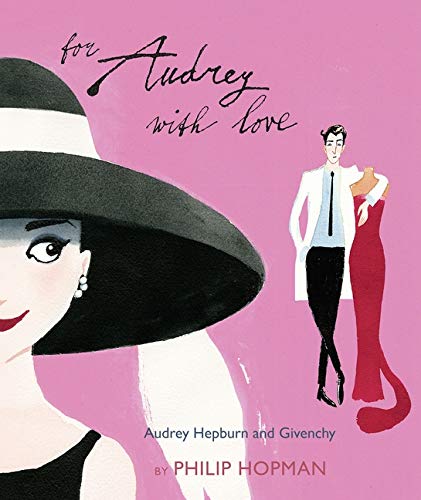 Originally published in the Netherlands in 2016, this homage to the friendship and careers of the couturier designer Hubert Givenchy and actress Audrey Hepburn does not fare well in translation.

Billed for the four to eight year old set, the beautiful story of the enduring friendship of these two creative icons of the mid-20th century is dumbed down to the point of being meaningless.

When they meet for the first time, the text reads, “’Hubert, this is Audrey,’ Philippe said. ‘Audrey, this is Hubert.’ ‘Nice to meet you, mademoiselle,’

Hubert said. ‘You need clothes for a movie? I’m afraid I have not time to design anything. But you are welcome to see what’s on the rack.’”

The off-the-rack clothes fit perfectly and a friendship—and professional relationship—is launched. Hopman leaves out the interesting fact that Hepburn wore several of the dresses she chose that day in her next film, Sabrina. Also omitted is any understanding about what it was about each person that drew them to each other—beyond that she liked his clothes, and he liked how she looked in them. What was the meeting of their minds and souls?

There is a brief passage telling the reader that, “Audrey had a glamorous life. Meanwhile, she traveled the world to raise awareness for children in need. She always wore Hubert’s clothes. Even when she baked a chocolate cake.

“’Is that Hubert your boyfriend?’ friends would ask Audrey.

“’Oh no,’ she answered. ‘He is much more than that. When I wear his clothes, I feel safe. I’m not afraid of anything.’”

Hepburn actually is on record as saying, “His are the only clothes in which I feel myself. He is far more than a couturier, he is a creator of personality.”

Givenchy’s clothes did make her feel safe, but that is different from how and why she treasured her friendship with this man, who she considered to be like a brother to her.

Toward the end of the book, Hopman allows us to eavesdrop on an international telephone conversation between the two friends: “’Hi, Audrey. Hubert here. Where are you? In Africa again? Are you taking good care of yourself? Oh, I’m doing great. I just went for a walk.’”

In the finale of this inane dialogue, Audrey asks, “’Hubert, will we be friends forever?’ ‘Yes, Audrey. Forever.’”

Better known for his drawings than his writing, Hopman’s watercolors capture the energetic lines and dashes of color typical of fashion sketches. The images also have that certain louche style of mid-century New Yorker magazine cartoons and illustrations that depict sophisticated, urban men and women. His young readers are being launched into a world far beyond the ken of most of them.

Sadly, the illustrations also are flawed. For example, Hopman depicts an array of outfits created by Givenchy for his first Paris fashion show. We learn that, “All the ladies wanted Hubert’s dresses, jackets, and blouses. Especially the Bettina blouse, which was white with black trim. It was a sensation!” Not one of the outfits illustrated in the double page spread includes a Bettina blouse. If you’re not in the know, you’ll have to Google to find out what it looks like.

Then Hopman writes, “Audrey needed clothes for her next movie. But everything she tried was stupid.” Across the page illustrating that text are a series of recognizable movie costumes, including Judy Garland’s checked gingham dress from The Wizard of Oz; Rita Hayworth’s black, skin-tight night club gown worn in Gilda; Marilyn Monroe’s white dress from The Seven Year Itch; the outfit “the poor didn’t want,” which Julie Andrews wore when she first met the Von Trapp family in The Sound of Music; and Cecil Beaton’s black-and-white creation Hepburn wore in the memorable Ascot Race scene in My Fair Lady.

To call any of these costumes “stupid” is an insult to costumers. It is particularly odd to include in the array Beaton’s gorgeous two-tone ensemble he created for Hepburn for her 1964 role as Eliza Doolittle.

Hopman gets the chronology wrong as well. Hopman writes, “In her next movie, Audrey played a frivolous woman who liked having breakfast at a jewelry store!” Hepburn’s first film after meeting Givenchy was Sabrina (1954). Hepburn wore several of his designs in that film. Breakfast at Tiffany’s was made in 1961, many years after Audrey starred in a multitude of films, including War and Peace (1956), Funny Face (1957), Love in the Afternoon (1957), and The Nun’s Story (1959).

Perhaps Hopman means that Breakfast at Tiffany’s was the next film Givenchy designed costumes for Hepburn. But that also isn’t correct. Although Edith Head won an Oscar for the Funny Face costumes, it was a collaboration, with Givenchy designing all of Hepburn’s Paris wardrobe for the film.

It’s clear that Hopman worked hard to make the story simple to understand for a young audience, as well as to include inside jokes for the adults reading to their tots. But the text doesn’t flow. It is stilted, lacking in grace, and poetry, and it conveys no insight or understanding into the deep friendship shared by Hepburn and Givenchy.