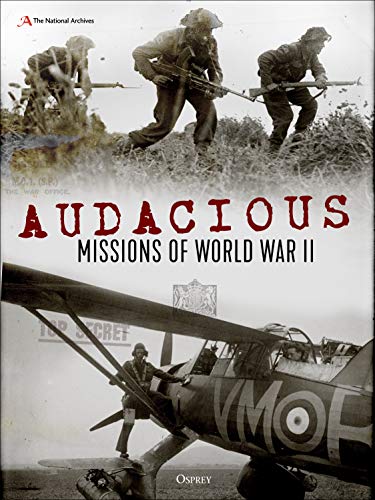 “an excellent one-volume resource for anyone wanting to learn about the breadth and daring of British special operations in the European Theater during World War II, covering the range of mission on sea, land, and air.”

After the German conquest of France and the retreat of the British Army to their home islands, Winston Churchill wanted a way to strike back at the Nazis to show England was not out of the war. He commissioned a group called Combined Operations to bring together specially trained soldiers to work with the Royal Navy and Air Force to launch a series of audacious raids along the coastlines of France and Norway to achieve quick strikes against German outposts.

The British also created the Special Operations Executive (SOE), a joint intelligence and covert action command to conduct particularly hazardous operations against the Nazis. Audacious certainly describes some of the missions in this brisk new book authored by the British National Archives, many of which were little short of suicidal, and it’s amazing that any of their participants survived to tell their tales.

The most daring of these forces became the legendary British commandos, the grandfathers of nearly every Special Operations force in existence today. Combining harsh training with a definite devil may care attitude, these forces were able to project British power not only to show the Nazis that Britain was not of the war, but to accomplish certain strategic objectives.

These operations gradually grew in complexity and scope, from the first raids on isolated German outposts in Norway to the raid on St Nazaire, France, to destroy a crucial dry dock and shipyard that actually involved ramming an explosives-packed British destroyed into a massive dry dock gate and detonating it, damaging the dry dock for the rest of the war.

Others may not have been as well known, but served equally important strategic purposes, particularly the raid by British airborne forces to capture a German radar set at Bruneval, France in 1942, the first real special operation to capture a critical piece of enemy technology in military history. Notably, the commander in that raid, Major John Frost of the British Airborne, later achieved fame during another audacious operation, the Allied attack on Arnhem in 1944.

All of these capabilities were severely tested during the most audacious raid of all, the Dieppe operation of 1942. This was a massive operation that ended as an Allied debacle when they underestimated the strength of the German defenses surrounding the port and city. Although the Allied forces, mostly Canadian infantry, suffered nearly 50% casualties, the Allies learned two harsh lessons—they were not ready to open a second front in 1942, and the idea of capturing a German defended port was militarily unlikely. These two lessons were to play a major role in later planning for the Normandy invasion.

The different operations carried out by the individual British services also have their own vignettes as well, notably the Royal Navy operation to sink the German battleship Tirpitz using midget submarines and the two most challenging Royal Air Force operations to destroy the dams in the Ruhr industrial region and the effort to stop the German rocket test center at Peenemunde and later destroy the German V-1 and V-2 rocket launching sites, an antecedent to efforts to hunt down Saddam Hussein’s Scud missiles during Operation Desert Storm.

The covert operations by the SOE are also highlighted, especially one of the most secret and deadly missions of the war, the efforts by British and Norwegian SOE agents to destroy the Norsk Hydro heavy water plant at Vemork, Norway. Heavy water was considered a key ingredient to potentially creating an atomic bomb, and when British leaders learned of German interest in gathering heavy water, the alarm set off a costly operation that eventually succeeded in not only destroying the plant, but sinking all the available stock of heavy water on a ferry boat being transferred to Germany.

While the individual operations are covered with excellent pictures and outstanding maps, many from the Archives and previously unseen, it was a regrettable shortfall that there was no bibliography or further reading section of the book. This is the sort of quick overview book that would be a natural launch to further exploration of a particular topic, and it was somewhat disappointing that this opportunity was missed. Many of these operations, for example the Dieppe and Norsk Hydro missions, have extensive histographies, and there are a number of unit histories on the commandos and other special mission units as well.

Nonetheless this is an excellent one-volume resource for anyone wanting to learn about the breadth and daring of British special operations in the European Theater during World War II, covering the range of mission on sea, land, and air.