Au Revoir to All That: Food, Wine, and the End of France 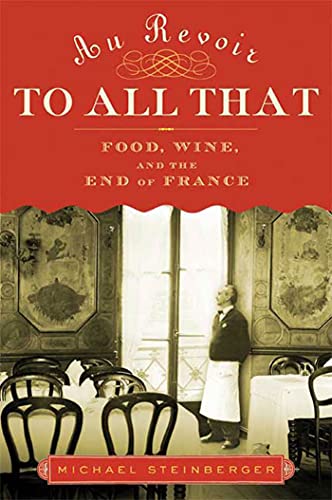 Golden Ages are slippery things, confirmed only in hindsight. Did Rembrandt and Vermeer realize they would be remembered as the Dutch Masters? Did audiences know the jazz greats of the 1930s and 1940s would come to define the genre? By the time they are golden, they are already over. Now it is the turn of French gastronomy. Or at least that’s the subject under investigation in Michael Steinberger’s Au Revoir to All That. Throughout this roving and often ravishing book, Steinberger, a wine critic with Slate magazine, charts in detail the heady success, frustrating stagnation, and, ultimately, the capitulation of French haute cuisine. It’s both an essay and a eulogy.

It’s also nothing new. U.S. critics have been remarking on the decline of French food and wine for well over a decade. In 1997, as Steinberger points out, an article in the New Yorker asked: “Is There a Crisis in French Cooking?” In 2003, the New York Times heralded the rise to power of Ferran Adrià and Spain’s nueva cocina, contrasting its neighbor’s irresistible mojo with an “ossified and rudderless” French cooking.

“Twenty years ago, everybody went to France,” one Spanish critic told The Times’ Arthur Lublow. “Today they go there to learn what not to do.”

So what happened? How did “the first nation of food” begin serving endless courses of self-commemoration? How did its Michelin-starred gastro-palaces start dishing up a dead cuisine?

Steinberger wanders far and wide to eke out the answers, interviewing chefs, meeting producers, and quaffing with winemakers in an effort to understand this curious fall from grace. The reasons behind it, he discovers, are legion.

There is the stultifying socialism inherited from Francois Mitterrand—which doused restaurants in bureaucracy and punished them with a VAT rate that, until recently, stood at 19.6% (fast food outlets, by contrast, paid 5.5%). The result made two- and three-star restaurants look even more exorbitant. By 2007, we learn, France was McDonald’s second-most profitable market.

There are changing habits—French people now spend less time cooking, Steinberger writes, and consume far less wine. There are the hypermarchés (the French equivalent of Wal-Mart, in both the economic and cultural sense), which have been turning the screw on artisan producers (even authentic Camembert is all but extinct).

There is also the failure of its cuisine to embrace France’s immigrant communities—in contrast to, say, its soccer team (the mind boggles at what could happen if a talent like Zinedine Zidane hit the kitchen. . .).

Financially stressed, unable or unwilling to innovate, and forced to work under the thumb of the Michelin Guide, French chefs have fled in numbers overseas. And in doing so, ironically, they have ignited the cuisine of New York, Tokyo, and London (the Roux brothers, of London’s La Gavroche, count both Marco Pierre White and Gordon Ramsay among their protégées). Paris’s culinary thunder has been stolen.

Steinberger also devotes time and care to explaining why France earned itself a Golden Age in the first place. Its supreme terroir (producing superb wines, tender meat, and delicate game), its culinary nationalism, key figures like Fernand Point and Alain Chapel, and a public that instinctively ranks chefs alongside artists all combined to create something very special.

And as anyone who has travelled to France will attest, when French cuisine is good, it remains very, very good. “Nothing left me feeling more in love with life than a sensational meal in Paris,” Steinberger writes. This reviewer remembers having the same feeling, visiting a buzzing bistro on the Left Bank with the woman who is now my wife. Having travelled widely in France, in reading this book I found myself itching for yet another return visit.

When Steinberger eats well, his descriptions of food and drink lift his prose off the page. His enthusiasm for good pralines millefeuille, salad Niçoise, or foie gras positively sings. After a glass of Petrus, he writes: “The aftertaste was so achingly good that I went to bed that night without brushing my teeth. . . .” It’s fun, substantive, and for the most part steers clear of foodie clichés.

Nor is he afraid to stick the knife in. At Le Côte d’Or,the restaurant run by Bernard Loiseau before his suicide (Loiseau is said to have killed himself because one of his three Michelin stars was in jeopardy), Steinberger finds flavors that “seemed washed out.” Paul Bocuse, he portrays as “an elderly man with puffy raccoon eyes,” outing the legend as a has-been more interested in self-promotion than the food emerging from his kitchen (namely, “gummy” noodles, “tasteless” fish, and sauce “thicker than Plaster of Paris”).

For all this, Au Revoir has its faults. Confusingly, for instance, Steinberger seems both to lament and applaud the rise of the chef d’enterprise. He spends too little time in domestic kitchens and bistro-level eateries. I would also provide the rider that, no matter how great French gastronomy once was (and still can be), it was always possible to eat (and be served) terribly in France.

Finally, whether deliberate or not, Steinberger gives the impression that France’s problems are in the main of its own making. Many Western countries are in gastronomic decline, and France is not alone in suffering a crisis. Rocketing obesity rates, mushrooming fast food outlets, and a rising convenience culture are Western—as opposed to French—phenomena, and there are plenty of Londoners and New Yorkers who spend more time watching celebrity chefs on TV than they do cooking real food in their own kitchens.

In the end, Steinberger is hopeful as opposed to optimistic. He sketches new chefs, like Christian Constant, Thierry Breton, and Gilles Choukroun, who are stirring things up, cutting out the pomp, letting the light in (though, oddly, he omits France’s Le Fooding guide, which has challenged Michelin by focusing on more inventive, bistro-generated fare since its launch in 2000). And in the final chapters, he rings a positive note, observing a cuisine in “revolutionary ferment.”

That’s a good thing. But the golden age of French cuisine is well and truly over.

Pól Ó Conghaile is an award-winning travel writer based in Ireland who has published in CondeNet, Guardian/Observer, Irish Independent, The Globe & Mail (Canada), The Irish Echo (U.S.), Village magazine, and others.