The Attempted Murder of Teddy Roosevelt 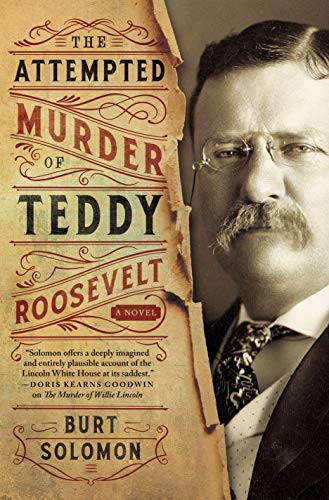 “TR deputized Hay to investigate the accident . . . or was it an attempted assassination?”

There is great joy in writing historical fiction. The perimeter of the story and many of the characters can be sourced from historical fact. The real history that does not fit can be swapped with more convenient nuts and bolts. The internal organs can be found in one’s imagination.

Burt Solomon has accomplished this in The Attempted Murder of Teddy Roosevelt, a splendid tale of mostly fiction set in the first year of TR’s service as president.  Solomon is a contributing editor at The Atlantic. His contributions there favor real facts rather than fabricated ones.

Roosevelt was campaigning in western Massachusetts in September 1902 when an electric streetcar collided with his horse-drawn carriage on South Street in Pittsfield, injuring the president and killing his Secret Service guard. Also on board the vehicle was John Hay, the Secretary of State. TR deputized Hay to investigate the accident . . . or was it an attempted assassination?

Any story involving Teddy Roosevelt is sure to take advantage of the truth about this remarkable, but peculiar, person. It is said that TR would be the first choice for a dinner guest, but only if you did not want to get a word in edgewise. Roosevelt is a towering figure in American history, the perfect transitional catalyst from the 19th century to the 20th. He is only the supporting actor in Solomon’s narrative, but Roosevelt would never willingly be called a supernumerary.

Solomon uses the Pittsfield setting with aplomb. South Street today has a steep hill that could have caused an accident, but why would the streetcar in 1902 have waited for 19 minutes at the top of the hill if not intentionally to crash into the president’s carriage? The leaves of the Berkshire mountains had begun to turn bright colors, something that only a skilled author would discover could occur in western Massachusetts on the first week of September.

Hay conveniently runs into a variety of other public figures as he methodically pursues the truth about the incident. He meets with Emma Goldman, the immigrant anarchist, to check whether a possible suspect was one of her followers. (He was not.) Nellie Bly, the journalist who sought adventure, becomes a valuable adjunct in Hays’ investigation. Henry Adams, the historian, close friend of Secretary Hay and grandson and great-grandson of American presidents, was no admirer of Roosevelt. Could he be involved in this cabal?

Hay’s affection for Lizzie Cameron (whom he called “Lovey”) becomes the lynchpin of the mystery. Lizzie was the preeminent matron of Washington society, and Hay was happily married. Their entanglement drives the story forward.

Solomon’s conclusion of this investigation exceeds the boundary of the actual facts. The coroner in Pittsfield had found the 1902 South Street collision to have been an accident. Burt Solomon does not, and his conclusion is much more satisfying to the reader and to President Roosevelt.