The Astaires: Fred and Adele 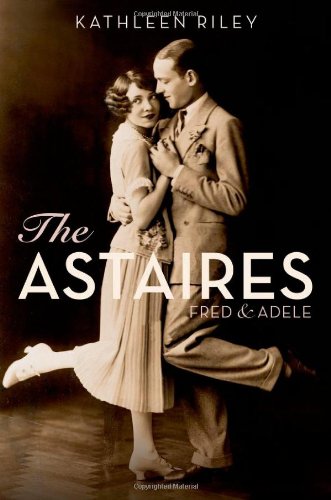 “The Astaires: Fred and Adele is a page-turner of a biography, briskly written and immaculately researched. Author Kathleen Riley has, among other things, been given access to audio recordings of Adele Astaire that allow her to tell her story with an authority uncommon in modern biographies. This is an excellent work, well worth reading.”

Surely of all the song and dance teams that have tapped their way into our hearts, the best known and most revered is that of Fred Astaire and Ginger Rogers.

It was, apparently, Katharine Hepburn who said of the pair: “He gave her class, she gave him sex.” And together, in gown and tuxedo, they defined dancing for the first generation of filmgoers.

And yet before Ginger Rogers, Fred Astaire had another partner who, with him, is the subject of Kathleen Riley’s The Astaires: Fred and Adele, the story of the brother and sister act that stormed vaudeville, brought London to its feet, and taught George Gershwin how to dance.

While staying comfortably within the guidelines of the traditional show business biography, Kathleen Riley offers her readers some major surprises within the covers of her book. First, there is Ms. Riley’s writing itself. She displays here a gift for both the whopping anecdote and the wry phrase. (“For the Duke and Duchess of Devonshire, one of the advantages of having their charmingly wayward son in the United States was the Prohibition laws, but Charlie’s first order of business was to make contact with a bootlegger and to have his suits adjusted to accommodate a discreet flask.”)

Another surprise is Adele Astaire herself. She was, perhaps, the original American pop idol. As she sang, danced, and smarted off in front of her audiences, they cheered her, they egged her on, and, most important, they adored her.

The character as written, a 1920s siren, her hem just an inch longer than a flapper’s, leaps off the page, at once making the reader happy to have been introduced to her through this biography, and sorry to learn that, in this age of YouTube, no film record exists to more fully reveal her charms.

Also surprising is the background from which Fred and Adele Astaire (née Austerlitz) sprung:

“People are often astonished to learn of Fred and Adele’s humble Midwestern origins, considering that he became a Hollywood legend synonymous with all that is debonair and urbane, an artist whom George Balanchine likened in rareness and stature to Bach, and she—a girl who danced with the Prince of Wales—became the Duke of Devonshire’s daughter-in-law and was related by marriage to Harold Macmillan and John F. Kennedy.

“Yet, for all their grown-up glamour, some essential constituent of their being remained indelibly of the Midwest and its vaudeville playhouses. In Fred this manifested itself in an indomitable work ethic, in Adele an irrepressible impulse to burlesque pomposity and play the clown, and in both of them a curiously incorruptible and fundamentally American innocence, which their consciously and unconsciously acquired layer of international sophistication could not disguise, not their show-business worldliness entirely subvert.

“Adele and Fred were born at the end of the nineteenth century in Omaha, Nebraska, which, with the completion of the First Transcontinental Railroad in 1869 and the founding of the Union Stockyards in 1883, had become a booming center for transportation, meatpacking, and breweries and the fastest growing city in the United States.”

The energy of young America infused itself within the Austerlitz children, as it had once carried their father, Fritz, from Vienna to New York City, in order to make a name for himself as a singer and musician. His dream dashed by the economic collapse of the Panic of 1893, Austerlitz ultimately found his way to Omaha, and marriage and fatherhood. And when his children early on showed signs of musical talent, their father was only too happy to pass his dream on to them.

As the author explains:

“The legend attached to Fred’s first dance steps was perhaps the inspiration behind the seminal scene in Stephen Daldry’s 2000 film in which northern schoolboy Billy Elliot, hovering on the periphery of a little girls’ dance class, tries on a pair of ballet slippers and earnestly imitates the barre exercises preformed, somewhat lackadaisically, by the diminutive ballerinas. Whether Fred found his true calling after this fashion or not, he did demonstrate some aptitude and affinity for dance—if not the outstanding natural ability of his older sister—and he could dance en pointe (more successfully than she, claims Adele, who had a much lower instep than her brother). This was a rare talent for a male and one he shared with no less a dancer than Nijinsky.”

Indeed, it was Fred Astaire’s talent for dancing on point that, in part, made the brother and sister act special. For this reason, and because of their natural talent—Fred as a dancer, Adele as an actress and performer—that their teacher, Willard Chambers, convinced their parents that the two needed to be taken to New York City, both in order to complete their education and also to find work for them on the best vaudeville stages.

Because her marriage had turned out to be an unhappy one, Anna Astaire was only too happy to take her children to New York, and, there, to raise them on her own. Fritz, remembering his own ambitions, agreed to stay on in Omaha, continue his work, and fund the expedition.

From the moment of arrival in the Big Apple, the reader is treated to stories of the evolution of the family name for the sake of the marquee: From Austerlitz, to Austier, Auster, to L’Astaire, to Astare, to Astaire. And to stories of the excitement of an opening night on Broadway with F. Scott and Zelda Fitzgerald sitting in the front row, of British royalty being enthralled with them, and of an assessment of the theatrical grace of Adele Astaire from no less than Cecil Beaton that said that she looked like “Felix the cat with her large amusing head on a minute exquisite little body.”

Ultimately they rise from opening act in second-rate vaudeville houses to opening Broadway shows written with them in mind. Of one of these, Lady Be Good, famed critic Alexander Woolcott wrote:

“I do not know whether George Gershwin was born into this world to show how the Gershwin music should really be danced. But surely they were written in the same key, those two.”

Ultimately, Adele married into a titled British family, splitting up the most successful act in show business. She would go on to multiple miscarriages, an early widowhood, a second marriage and an existence that never again allowed her to set foot on a stage.

Her brother, on the other hand, continued on as a solo act, and after an initial struggle with acting in a non-musical (about which, Harold Lockridge in the New York Sun wrote, “Fred Astaire, when his miraculous feet are quiet, gives a curious impression of unemployment.”), turned his attention again to musicals, and, finally to Hollywood.

Once there, he was first signed by famed agent Leyland Hayward and then by Pandro S. Berman, head of production for RKO. Once signed, he soon heard rumors that troubled him and fired off a telegram to his agent (capitalization his):

“WHAT’S ALL THIS TALK ABOUT ME BEING TEAMED WITH GINGER ROGERS? I WILL NOT HAVE IT LELAND—I DID NOT GO INTO PICTURES TO BE TEAMED WITH HER OR ANYONE ELSE. AND IF THAT IS THE PROGRAM IN MIND FOR ME I WILL NOT STAND FOR IT. I DON’T MIND DOING ANOTHER PICTURE WITH HER BUT AS FOR THIS TEAM IDEA IT’S OUT. I’VE JUST MANAGED TO LIVE DOWN ONE PARTNERSHIP AND I DON’T WANT TO BE BOTHERED WITH ANY MORE. I’D RATHER NOT MAKE ANY MORE PICTURES FOR RADIO IF I HAVE TO BE TEAMED WITH ONE OF THOSE MOVIE ‘QUEENS.’”

To which Pandro Berman quickly replied:

“TELL ASTAIRE HOLD HIS WATER WITH REGARD TO TEAMING STOP HE IS NOT READY TO BE A STAR IN HIS OWN RIGHT AND IF WE WANT BOLSTER HIM WITH GOOD SUPPORT FOR THE NEXT FEW PICTURES THINK HE SHOULD THANK US STOP GINGER ROGERS SEEMS TO GO RATHER WELL WITH HIM AND THERE IS NO NEED ASSUME WE WILL BE MAKING PERMANENT TEAM OF THIS PAIR EXCEPT IF WE CAN ALL CLEAN UP LOTS OF MONEY BY KEEPING THEM TOGETHER WOULD BE FOOLISH NOT TO.”

And the rest, as they say, is history.

The Astaires: Fred and Adele is a page-turner of a biography, briskly written and immaculately researched. Author Kathleen Riley has, among other things, been given access to audio recordings of Adele Astaire that allow her to tell her story with an authority uncommon in modern biographies. This is an excellent work, well worth reading.