Political Assassinations and Attempts in US History: The Lasting Effects of Gun Violence Against American Political Leaders 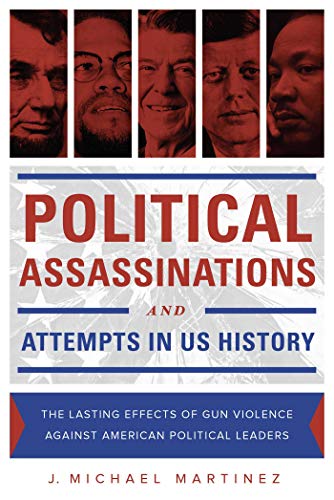 "This work makes for thought provoking good reading including finding much lost history."

Author J. Michael Martinez writes, "the shooting of [presidential candidate] Bobby Kennedy remains my first vivid memory of an event that occurred outside of my immediate family." Since the murder of President John F. Kennedy in 1963, such events left many Americans with similar experiences.

Political change through violence came to the New World from the Old World, starting with murdering Native American leaders and among the conquerors themselves. It grew to include the genocide and ethnic cleansing of entire cultures and peoples.

Looking at all murders or attempted murders because of notoriety in this country would go beyond a single volume. The author confines Political Assassinations to 25 case studies that "illustrate the evolving sensibilities of assailants, their targets, and the American people."

"No other nation with a population of over fifty million people has witnessed as many political assassinations or attempts," Martinez writes. The toll includes nine presidents resulting in four deaths. Even the countless inept attempts to kill public figures reflect deranged minds.

In Political Assassinations, Martinez asks "why would someone resort to violence aimed at a public figure?" In story after story, often in looking at now obscure but fascinating events, he judges the circumstances and motives, "to understand, to the extent possible, what happened and why."

Martinez discovers that "the story is not quite so conceptually or factually simple" as just labeling the "actors" as crazy. Using James W. Clarke's "typology of assassins," he divides his book into "five categories according to their [the assassins’] intentions" in "exploring what the individual assailants hoped to accomplish."

Some of these metaphorical square pegs fit in more than one round hole. Dan White, who killed Harvey Milk, for example, fits effecting change (category one) and hallucinating insane (category four) but also maybe in wanting fame (category two) or mercenary who did not care about life (category three).

Suicide prevents determining if White fell into miscellaneous (category five). A similar situation exists with John Wilkes Booth. Martinez writes, "no doubt a discerning reader can take issue with some or all of these characterizations."

The author warns of "categorizing assassins according to their suspected motives is a potentially perilous exercise," however. Assassins run the gambit from certifiably insane to seemingly perfectly normal.

Fortunately, Americans have yet to debate if assassination is justified in the way we argue over firearms. Religious leader "Joseph Smith did not deserve to be killed—no one "deserves" to be murdered at the hands of an extralegal band, Martinez writes, "or anyone else and by individuals as numerous, various, and amorphous as the hopes, desires, and fears of the individuals themselves."

Beyond dueling, assassination in America began with the polarizing populist President Andrew Jackson in 1835. "Many persons entertain feelings of despair," Martinez writes, and by assassination, or attempt to kill, "affected the course of American history."

This book does not delve into that critical point. Political Assassinations leaves it to the reader to judge relevancy to the times. The afterword offers a list of other issues not really covered in these case studies.

Contrary to the subtitle, the book does not really discuss gun violence or why lack of commonality among assassins matters. Martinez also fails to "make a plausible case for understanding why these marginalized figures believed that it was necessary to employ violence."

This work makes for thought provoking good reading including finding much lost history. Better accounts exist of most of these killings and attempted murders. Political Assassinations comes fully documented although the copyediting fails in places.