Artists and Their Cats 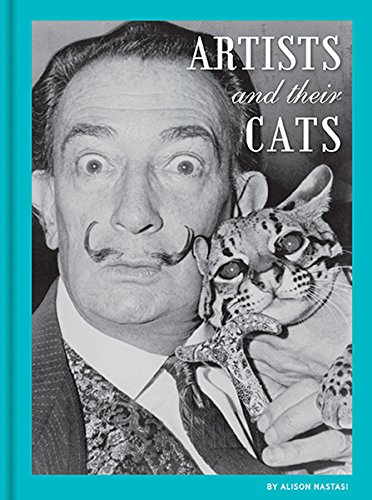 "... a compilation of photographs that are intriguing because they reveal a personal side of these artist luminaries that is rarely seen elsewhere."

Throughout history, artists have been inspired by the presence of certain other beings in their lives that motivated them to create their best work. Alison Nastasi,'s Artists and Their Cats focuses on animal muses. A series of photographs reflect the enduring and highly personal relationships between well-known artists and their cats.

In general, photographs that depict the relationship between animal and owner are often well received. What makes these most intriguing is the subjects, who are superstar art celebs: Salvador Dali, Margaret Bourke-White, William Burroughs, Ai WeiWei, Edward Gorey, and others. Of particular note is the unique rapport between the two that each photo captures.

German photographer Herman Tobiasis who is considered a "fierce feline ally" because he was an outsider, stands with his black cat's torso draped over his head like a helmet. Poet and musician Patti Smith sits in the corner of a sparse room, while her kitty sits perched on a windowsill nearby, lost in thought, peering out as if mimicking Smith’s creative ruminations. Pablo Picasso very tenderly and intensively cradles a tabby who, it is reported, would always be found in his lap. Sculptor Diego Giacometti makes full on eye contact with his cat, as if in the midst of deep conversation.

What exactly is this power that cats have to ignite creativity? The introduction to Nastasi’s book affirms the artist/feline muse connection through reference to a published psychology study:

“. . . it is not unusual for artists to plow through periods of intense work, followed by spells of idle self-reflection. Assuming such polarized lifestyles, artists can channel energies and organize their workflow in unconventional ways. It’s no different with cats. Domestic felines don’t need to expend energy hunting for food, defend themselves against predators, and migrate for water and shelter…Cats in the wild sleep up to twenty hours per day, and what is usually referred to as symptomatic  of lazy cat-it is in domestic kittens is actually an instinctive calling. Clearly, the loners and rebels of the human and animal worlds are soul mates.”

If you are a cat person, you will get a kick out of this little book. If you know a cat person, you might even consider buying Artists and Their Cats as a gift.  It is a compilation of photographs that are intriguing because they reveal a personal side of these artist luminaries that is rarely seen elsewhere.