The Artist as Mystic: Conversations with Yahia Lababidi 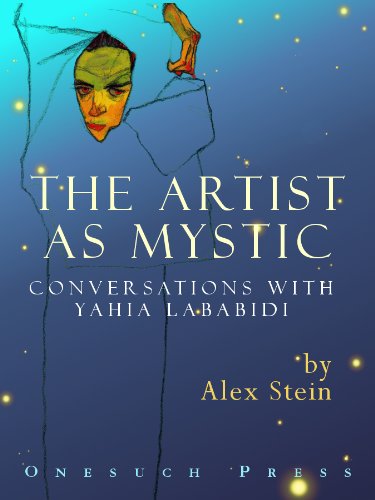 “. . . the journey of a seeker touching well-laid stones.”

Near the middle of Enrique Vila-Matas’ allusive masterpiece, Dublinesque, its cogitative protagonist’s mental meanderings alight on this:

“Borges always said that lots of mystics could pass as madmen, but that the case of Swedenborg was special, as much for his enormous intellectual capacity and great scientific prestige, as for the radical change in his life and work brought about by the visions that came from the hand of this unexpected visitor, who connected him to celestial life.”

That visitor, according to venerable Swedenborg lore, was the son of God, arrived in full corporeal resplendence.

If the son of God is not your flavor, however, or if he simply seems too tough a get, you could do worse than hosting impromptu salons with the ghosts of Nietzsche, Kierkegaard, or Borges himself.

That’s who Yahia Lababidi has drop by.

And the resulting dialogues show these illustrious guests beating back their natural anomie and desperation to show their best sides to this genial, conveniently deferential host.

This bright, odd little book ostensibly features a series of conversations between Alex Stein, its author, and Mr. Lababidi. But what it ends up being instead (and more valuably) is an account of the ongoing dialogues the author is having with the hard-won work of his literary heroes.

Kafka famously writes that a “book should serve as an ax for the frozen sea within us.” Books have doubtless torn Mr. Lababidi asunder. Exposed here are his insides, the divining entrails of a true believer, a man of great faith in the nobility of the human struggle for understanding and transcendence.

How much you will like this book will probably depend on how much you like looking at guts, which are on the inside for a reason.

Wrestling with metaphysics can get messy.

And while Mr. Lababidi acquits himself well on the mat, digression often begets digression (as befits his vast topic, it should be said), so a reader must be prepared for circuitry.

He begins at the beginning, though, recounting the first magical intimations of an incipient desire for self-expression that inhabited him as a teen. It’s a familiar tale, well and briefly managed—an intellectual bildungsroman in which the chrysalis of the artist nourishes itself on increasingly mature literature until a new stage brings more assuredness, and new doubts. Milosz’s great poem “Youth” and Blake’s Innocence and Experience cycle are taut and indelible expressions of a similar process—Joyce’s Portrait—a sustained, erumpent one.

In Mr. Lababidi’s case the stage he reaches, the stage in which he finds his form as an artist is as an aphorist. It is a calling that lends itself perfectly to the endangered art of conversation, to which this book is a small, exceedingly earnest testament.

Almost all great writers—we come to learn even as we realize we already knew—are aphorists, makers not just of original worlds but coruscating phrases: the memorable helps map the mystical. From those unparalleled standard-bearers, the King James coterie, to Heidegger, Nietzsche, Pascal, Baudelaire, Wilde, Rilke, Socrates (well, Plato, obviously), Lewis, Kafka, Auden, and more of their disparate, but bonded, ilk who drop into the thoughts (and onto these pages) so easily, Mr. Lababidi appropriates the choicest cogitations—not just for regurgitation but examination.

As a result, he has these men (and they are exclusively, curiously, men) talking to one another. There is something of the mystic about that trick. A genial host indeed.

About those aforementioned digressions, and their duality: much as one often leads the way up through a new, fragrant, freshly rendered grove, their axiomatic tendency is to leave unexplored neglected paths (as Frost laments.) This can be frustrating, especially when a key question about the value of the entire enterprise is left dangling.

Stein, an able if indulgent interlocutor, asks Mr. Lababidi at one point: “Where does one draw the line in looking to literary figures for answers or sustenance?” The answer never really comes. Perhaps it is incumbent upon each individual to find his own answer, but in a book with so much prescriptive content (“Stay at your table and listen. Don’t even listen, just wait. Don’t even wait, be completely quiet and alone.” Kafka), the effort to fashion an answer would not have been out of place.

Also, there are moments here when the editor’s abdication of duty strands the erudite Mr. Lababidi on an island of incomprehensibility, a particular pity given the already isolating difficulty of his subject.

Coming upon a sentence like this, I heard the echoes of my own submission to ideals that seemed at times almost too dauntingly resistant in despite to other possibilities, a reader is forced to wonder what profundity lay trapped beneath that tangle of words, struggling to get out.

But these are tiny trees in a big forest, and missing them is best. Mr. Lababidi reports that Baudelaire confesses from youth onward “a tendency to mysticism.” And Mr. Lababidi describes the Swedish aphorist and absolutist Ekelund, about whom I knew little and have been much enlightened, approvingly as “a literary soul-gazer,” a sobriquet it seems Mr. Lababidi would be ultimately happy to have carved on his tombstone. (You can be sure his lapidary epitaph won’t be some quip about wanting to be in Philadelphia.)

It is Ekelund who proposes that “The real poet is a mystic,” underscoring the truism that the bailiwick of both occupations is mystery, the hidden, the ineffable, and the making of something out of these, which is this book’s elusive subject at last. It’s enough to drive one mad, of course, as Borges, in writing about Swedenborg, knew.

So we look to forbears, predecessors. The desultory narrator of Dublinesque convenes in mind with James Joyce, the best blind aphorist since Milton (or is it Borges himself?) Dostoyevsky admits, we all come out from beneath Gogol’s Overcoat. And on and on. Only a fool in the quest for understanding neglects such established foundations.

Mr. Lababidi is no fool. “If I have seen further it is by standing on the shoulders of giants,” Isaac Newton wrote, aptly describing the climb that is also this deeply indebted book’s journey. It is the journey of a seeker touching well-laid stones. It should be helpful, or at least inspirational, to those who also want to travel that path.

After all: “There are some writers,” Yahia says, “in whom one can see one’s own possibilities.”