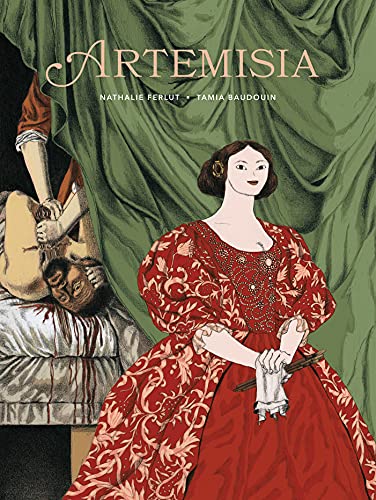 “Unfortunately, this isn’t the accurate biography it purports to be.”

Artemisia Gentileschi, the Roman baroque painter, is definitely a subject worthy of a graphic novel. She’s already been the focus of novels, movies, and plays. This version, however, is not historically accurate. By seeing everything through a tight feminist lens, Artemisia’s actual accomplishments are downplayed. That may not have been the intention, but it certainly is the result.

The plot is confusing as it pivots between past and present (the present never quite clearly situated). The device of having a nanny/chaperone explain Artemisia’s past to her daughter is ineffective and heavy handed. Worst of all, however, is the unfair depiction of Orazio Gentileschi. Apparently in order for Artemisia to be a strong feminist, her father must be an evil villain. As Artemisia complains to her daughter: “I was forced to become a woman, forced to marry and to become a mother—all before I could even truly become a painter!”

Given that she painted her first masterpiece at 17 and that Orazio boasted she had no equal when it came to painting, this characterization hardly seems fair. Later pages show Orazio claiming that it’s a waste of time to train a girl to paint: “She’ll never do anything with her talents.” There’s no historical evidence at all for such an attitude. In fact, Orazio seems to have helped his daughter get commissions, and he definitely encouraged her artistic skills.

Worst of all is the scene where Artemisia poses nude for her father. Such a thing is highly unlikely. Only prostitutes modeled naked for painters during this time. In fact, Orazio’s female nudes have been criticized as being anatomically stiff, an unlikely charge if he had used an actual live model. Artemisia did pose clothed for Orazio, specifically for “Young Woman with a Violin.” Supposedly the author found a scholar to support this view of nude modeling, but it’s certainly not widely held and including it feels sensationalist as well as anachronistic.

There are many more factual errors, too many to bother to point out. Even more problematic than the historical anomalies is the characterization of Artemisa herself. She’s shown as strong-willed but not as particularly artistic. More words are spent on the famous rape trial and the villain Agostino Tassi than on Artemisia’s development as a painter, a sad commentary on how this writer sums up the life of a woman painter. Not one single commission is described, not one bit of artistic development is shown. The focus is squarely on the lurid, not on the actual achievements of this impressive artist.

For supposedly feminist fable, Artemisia’s immense success is minimized. Not much is made of her work in Florence as a court painter or her later career in Rome, Naples, and Venice as a highly acclaimed artist who commanded the highest fees—higher than most men. Instead, petty arguments with her husband become the main plotline. Nor is her late-in-life reunion with her father, both called to paint at the Court of Charles I of England, treated with the drama it deserves. Instead it becomes another opportunity to swipe at Orazio as a terrible father.

Artemisia was indeed a “trailblazing Baroque master,” as the back cover of this book proudly proclaims. Unfortunately, this isn’t the accurate biography it purports to be. The curious would be better served by reading some actual art history.