The Art of Recklessness: Poetry as Assertive Force and Contradiction 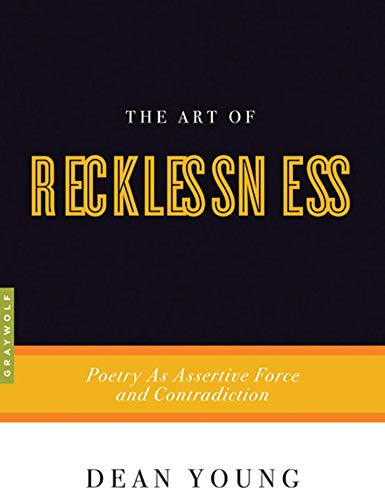 This is indeed a subversive book. In it Dean Young pushes the point that poetry is not a craft or a discipline or even a job: poetry is a compulsion. While there is crafting to be done once the dust settles, poetry comes from deep within; it is a visceral reaction to the world. For Young, poetry is the need to impose one’s self upon the world, to assert in the strongest possible terms what it means to be and to feel and to know.

Dean Young is a well-regarded poet in his own right. He has written nine collections of poetry including Primitive Memoir, Embryoyo, and Elegy on Toy Piano, which was a finalist for the 2005 Pulitzer Prize. He has been awarded the Colorado Prize for Poetry for Strike Anywhere, and has received a Stegner Fellowship from Stanford University. Young lists his occupation as poet, though in 2008 he became the William Livingston Chair of Poetry at the University of Texas at Austin.

The core of Young’s argument is that to deliberately set out to fulfill certain poetic or literary outcomes is to deny the inherent creativity of poetry. As suggested in the title, poetry for Dean Young is the intentional revelation of the unintended, the brave and reckless exposition of that which resides within us. He asserts that creativity is not a planned activity. The poet must always be ready to go where poem takes them: “At every moment the poet must be ready to abandon any prior intention in welcome expectation of what the poem is beginning to signal.”

That is the essence of Young’s recklessness, to go where the path leads rather than planning the path to a specific destination. Young has a number of literary references for his argument, including Shakespeare, Wordsworth, Whitman, Pound, and Eliot. He liberally accesses the perspective of the Dada and Surrealist movements, whose resistance to, or subversion of, accepted forms and subjects lend themselves to his theories.

An example used in the text is Marcel Duchamp’s Trap. This is a four hooked coat rack which, despite its intended purpose, Duchamp has nailed to the floor. He explains as follows: “A real coat hanger that I wanted sometime to put on the wall and hang my things on but I never did come to that—so it was on the floor and I would kick it every minute, every time I went out—I got crazy about it and I said the Hell with it, if it wants to stay there and bore me, I’ll nail it down. . . .” Not only does it now not serve the purpose it was designed for, the rack has become another thing altogether, a trap for the unwary.

In this Young sees the metamorphosis of the ordinary, the planned, into the artistic and creative through hazard and happenstance. It is recklessness, just as we, people, are creations of chance, a genetic lottery, no matter how planned our birth. The language and style used by Dean Young in this book is another area that will divide opinion. At times the text is very nearly impenetrable. Some readers will see this as evidence of the elitism of poetry, and in some respects they are correct.

Rather than elitist though, poetry is personal. It is the public expression of private matters and as such uses a personal language and mode of expression. The Art of Recklessness is written by a poet and clearly expresses his personal views on the art. The way Young writes is an essential feature of the book and goes towards the core of his argument, what is inside is what must come out.

This is not a mathematics textbook, nor is it a book of facts. It is a personal expression of opinion. In this context, the way the book is written is perfectly appropriate for its intended audience.

The Art of Recklessness will delight some and be deplored by others. Those that see poetry as a craft and a labor will not subscribe to Dean Young’s theories. However, those that embrace the spontaneity of creative force will find, in this book, a great deal that will encourage them. Young’s advice is to write and then write some more. It is to let what is in there out before deciding upon the shape of it. This is a book by a poet for poets.