The Art of the Lie: How the Manipulation of Language Affects Our Minds 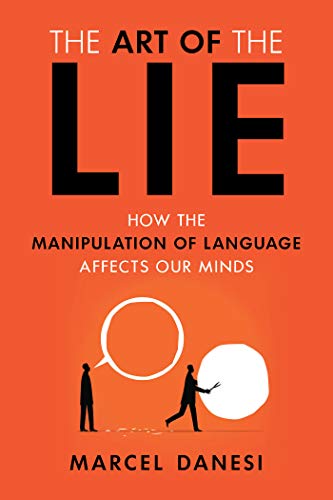 “what makes this book interesting is that the author has effectively generalized the purpose and behavior of a number of liars throughout the centuries.”

Any astute political reader on seeing the title of this book, The Art of the Lie, will immediately identify one of the principal subjects. Although it is clear that the author documents our current president as a “liar in chief,” this is not primarily a political book nor one about only a single person.

While the text describes many behaviors of the current White House occupant, what makes this book interesting is that the author has effectively generalized the purpose and behavior of a number of liars throughout the centuries. Using the term “Liar Princes” he identifies a number of individuals who have shown these traits including Machiavelli, Mussolini, Hitler, and P. T. Barnum.

By doing so he fascinatingly shows that much of the current political rhetoric is not unique. It is tied to a personality and speaking style, which repeats a type-specific behavior shown in the past. The author therefore places the US President as only one in a series of notable personages who have used lying frequently to justify their opinions, persuade their societies, and further their aims. These societal leaders and entertainers have used half-truths, untruths, confabulation, gas lighting, and truthful hyperbole to persuade people of the believability and necessity of their individual goals.

In addition to lying, many of these individuals have repeatedly utilized empty promises, revisionist histories and baseless attacks on political and media opponents as parts of their verbal arsenal. Their discourse continually creates a false sense of reassurance to their followers that they and they alone are able to solve the problems that plague their society. Derogatory and belittling nicknames are used on opponents who are described as losers, lapdogs, rapists, criminals, and women as “dogs,” emphasizing physical traits or what the Liar Prince sees as weaknesses of character.

The author details multiple reasons why this approach is effective, including that it often occurs in a society where there are a number of people who feel marginalized or even ostracized by the society in which they live. The leader promises a restoration of a sense of belonging and to glory days of times past which becomes quite appealing to his followers

In an attempt to disabuse information or statements that the leader contradicts, the Liar Prince uses tactics as alternative facts, alternative reality, Newspeak (George Orwell in 1984) doublethink, doublespeak, and fake news. The liar manipulates the public’s attempts to understand issues by restructuring the meaning of the words.

By creating “fake news,” the Prince creates doubt and leads many people to the sense that the lies just may have credibility. History is retold by creating alternative narratives which are only partially true or totally untrue. These histories are then repeated over and over again to the point that they have sticking power and believability.

Chronic repeated lying is described not as an isolated creation of one man or of one era in society, but a well-crafted style which has been used before. As we age, many of us including those of us who are usually truthful, can exaggerate or over aggrandize our memory of our history and accomplishments. The Liar Prince, however, does this routinely and repetitively to foster support in his followers. Such leaders have multiple rallies in which only his most fervent supporters are allowed entrance. This guarantees a revivalist-type atmosphere that reaches high emotional peaks at key points of delivery without any intrusive or mood- breaking opposition.

Very often, the Liar Prince states and repeats the existence of conspiracy theories that attempt to oppose the Liar Prince and are supported by his enemies and antagonists. The Liar Prince is a master of the big lie (for example, Hitler and the Aryan myth) and never allows his followers to forget it.  He never admits fault or concedes to a counterattack by weaponizing verbiage to demean anyone who does not agree with him. Denial, deflection, and distraction are used by the Prince to avoid the necessity of confronting the untruth of his statements.

In today’s climate, it would be useful if both sides of the political spectrum could read and grasp the principles that the author makes in this text. Unfortunately one strongly suspects that right-ward leaning disciples of the current president are much less likely to do so than their left-ward leaning counterparts.

Marcel Danesi, the author, is a professor of linguistic anthropology and communication. Thus he is well-positioned to write about this topic. Such an erudite professor, however, has the tendency to use words that may be outside the understanding of even the most avid reader. Words such as simulacrum, memetic, vulpine, dissimulation, Koinѐ, autopoesis, and semiotics are liberally sprinkled throughout the text. Nonetheless, even with this hindrance, the book is easily digested and covers well a topic infrequently described.