Art of the Apology: How, When, and Why to Give and Accept Apologies 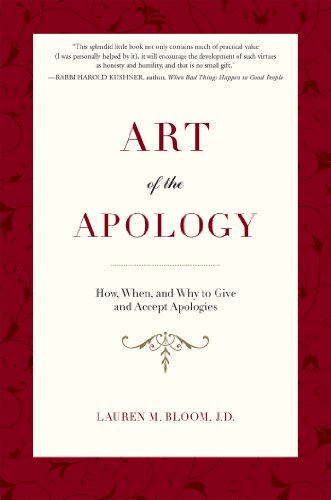 “. . . every reader can benefit by the sage advice on how to mend a rift or even a shattered relationship and lessen the personal impact of strife.”

Art of the Apology: How, When and Why to Give and Accept Apologies is one of the best how-to guides in the current marketplace for improving human communication which might greatly enhance  relationships of all kinds.

Not only is the author’s approach and style sincere as well as succinct, the humor contained in the book inspires the reader to deeply contemplate any missteps in his/her relationships. In addition author Bloom delineates some very helpful vignettes that mirror the lives of both famous and not so famous among us.

Bloom gives the reader the most successful methodologies for one to appropriately apologize or make amends to an injured party whose grievances range from the ordinary spat among siblings to the most egregious infringements upon others.

Bloom’s suggestions as to the “How, When and Why to Give and Accept Apologies” is described in her title of the book, with the premise that following her methods to make amends will achieve the most positive outcomes possible with almost anyone who feels slighted in any way.

Whether it’s mending a rift between parents and children, supervisor and employee, colleagues or intimate relationships, Bloom paves a pathway by including potential dialogues for each scenario.

Art of the Apology explains that sincere and heartfelt apologies would make our world a better place while ensuring intact integrity in the process.

When a reader opens this book, preceding the Table of Contents, Bloom states, “For Anyone who ever had to make an apology . . . in other words, for almost everyone.” This statement could not be more accurate. Who among us has not felt the discomfort or awkwardness that comes from something left unsaid and doesn’t know how to best say it within the right timeframe?

Probably the strongest aspect of Art of the Apology is that Bloom incorporates real life examples of notable people (including famous actors, politicians, and athletes) to cement for the reader the proverbial  do’s and don’ts of creating  effective, heartfelt apologies. She also delineates those that are done insincerely that could have disastrous results.

By providing contemporary and relevant examples extracted from the headlines, Bloom ensures that the reader will both recognize the people involved as well as to understand the points she is making.

To illustrate, she uses the now infamous example when President Bill Clinton fervently denied having sexual relations “with that woman—Monica Lewinsky.” By the time he succumbed to public pressure to admit the truth even his most avid supporters had exceeded their last shred of patience. It had serious implications for his presidency at the time. The main point of President Clinton’s very public insincerity is that the truth should not be doled out in bits and pieces.

Other famous people in power positions mentioned in Art of the Apology include Tiger Woods, whose not so perfect amends was used to gloss over his mistakes dramatically affected his career in sports.

Another strength of Art of the Apology is that the reader is provided with multiple choices within sticky situations such as in professional situations as to the wisdom (or not) of coming completely clean. For example, between business people and customers or a doctor/patient relationship, etc. Bloom suggests that with people in a “special positions of trust and respect” a higher standard of honesty is expected and rightfully so.

Of additional interest in the current age of technology are the most effective venues to make an apology. Whether an amends is done in person, e-mail, text, or by phone, Bloom’s insights are quite clear as to which delivery method will more likely achieve a positive result.

Art of the Apology is highly recommended for anyone and everyone who is dealing or has dealt with strife and struggles within relationships of all kinds. In short, every reader can benefit by the sage advice on how to mend a rift or even a shattered relationship and lessen the personal impact of strife.