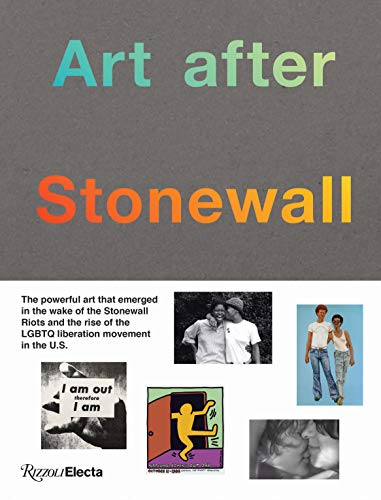 “Art After Stonewall is an engaging and illuminating chronicle of gay liberation. Art, photography, essays, and interviews reveal a movement in all its triumph and shortcomings.”

June 28th is an anniversary date in American history. Like December 7, 1941, or September 11, 2001, that night in June at the Stonewall Inn changed American history. After the New York City Police Department raid, gay, lesbian, and transgender Americans decided enough was enough and took to the streets. What followed has been termed a riot or an uprising. After decades of harassment, assault, murder, and silence, gay liberation became public.

Scheduled to open March 6th and to run through October 4th, Art After Stonewall, 1969–1989, was a museum exhibit set to celebrate the gains made from gay liberation. The exhibit, organized by the Columbus Museum of Art, is closed due to the Covid pandemic (and the catastrophic incompetence at the highest levels of American government).

While the Columbus Museum is closed, Art After Stonewall is available in book form from Rizzoli Electra. Edited by Jonathan Weinberg, with Tyler Cann, Anastasia Kinigopoulo, and Drew Sawyer, the deluxe coffee table edition showcases the history of gay liberation through art, photography, interviews, and essays. It is a rich tapestry of a long-buried group of Americans. Art After Stonewall is divided into multiple sections, each profiling a different aspect of gay experience.

Despite the paranoid fantasies of the oppressors, the gay liberation movement was neither monolithic nor sex obsessed. It took many years and much hard work for the various factions and subcultures to coalesce into a movement. Through interviews and essays, Art After Stonewall is as much a critical investigation of gay liberation as an exuberant celebration.

An illustration of this is how gay liberation turned an insult into a rallying point. When Betty Friedan, president of NOW, called lesbians “the lavender menace” in 1969, they turned it into a T-shirt. The photographer Lee Mason caught the image of Karla Jay wearing the T-shirt among a group of other gays and lesbians. The image was then used to advertise the Gay-in III held in Los Angeles in 1970.

Art After Stonewall chronicles the construction of a viable public community. While sex and sexuality form a relevant section in the exhibit catalog, being gay isn't simply about who you have sex with. The book challenges these reductive stereotypes with art and photographs. The exhibit also focuses on gender play, political activism, AIDS, and “coming out.” The act of coming out takes on a double meaning in this case, both as a gay person and as an artist. Institutional pushback and personal fear become real threats to gay artists. Artists are told not to reveal they are gay, and this has a chilling effect in how the art is expressed.

The section “Sexual Outlaws” has a drawing by Tom of Finland, but it is flanked by “Motorcycle Girls,” by G. B. Jones. A couple sits astride a motorcycle, the driver in a skintight T-shirt with a punk rock Mohawk, the lesbian passenger clad in Tom of Finland-ish biker gear sports a blonde ponytail. Throughout the book art works run the gamut from figurative to abstract. Photography ranges from highly polished studio pieces to documentary work bearing witness to struggle and triumph.

Some art is deceptively simple. Scott Burton's “Two-Part Chair” seems, at first glance, a granite chair. Abstract and minimalist, it looks like yet another inscrutable piece of modernist sculpture. After a while shapes emerge. The chair's two parts appear like two joined pieces reminiscent of the Nintendo game Tetris. (The chair was constructed in 1986, so perhaps Tetris was an inspiration?) One part is a sideways L and the other more like an angular S. When put together they reveal two forms in sexual congress. Hal Fischer's 1977 photograph “Signifiers for a Male Response from the Series Gay Semiotics,” presents itself as a kind of visual in-joke. It turns the posture and clothing of a gay man into a semiotic analysis. It becomes a primer of sorts for bewildered heterosexuals.

Even the institution of the museum is examined for its role in gay history. “In 1989, shortly after its founding, Visual AIDS coordinated with approximately seven hundred museums, universities, and galleries to observe the first annual Day Without Art on December 1, World AIDS Day.” Kyle Croft and Alex Fialho continue their mini-essay on “Day Without Art” by talking about how Visual AIDS's “most iconic gesture . . . was the Guggenheim's shrouded facade, a bold redaction that echoed both the enormous loss of life from AIDS-related complications as well attempts from the right wing to censor and defund what it deemed 'obscene' art.” Included are photos of the shrouded Guggenheim and Kay Rosen's 2015 photo “AIDS, On Going Going On,” the words projected in blood red letters.

Art After Stonewall is an engaging and illuminating chronicle of gay liberation. Art, photography, essays, and interviews reveal a movement in all its triumph and shortcomings. The criticisms do not take away from the celebratory mood of the work. Criticism actually enriches the history, showing gay liberation is not monolithic or devolving into simplistic hagiography. Movements must be critiqued or else they won't improve. The pieces selected for the book provide a multifaceted portrait of a community, a movement, an aesthetic, and a desire. With the exhibit temporarily closed, Art After Stonewall is the next best thing.