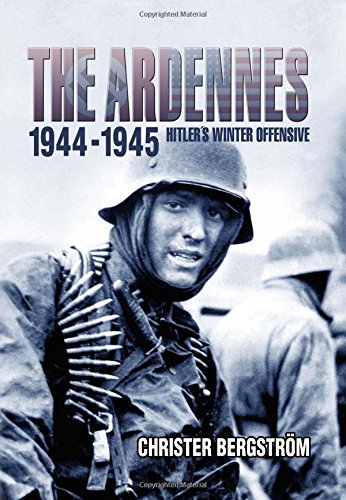 “For those interested in this critical campaign, this volume is recommended.”

With the advent of the 70th anniversary of the Battle of the Bulge, there is a new take on the 1944–1945 Ardennes campaign. Swedish historian Christer Bergstrom, author of some 20 other books on the conflict, has produced an analytical and interpretive volume which presents the strategic imperatives, tactics, objectives, and perspective from both sides.

It is based on prodigious research in German and American archives with some additional material from those of Great Britain. Interestingly, the book provides a number of highlights, some oddities, and a relatively few shortcomings.

The highlights include a welcome, extensive and detailed order of battle for each individual army and sidebars within the text of relevant incidents and personal experiences. There are statistical tables, excellently reproduced maps and many, evidently, previously unpublished photographs along with the personal illustrations of a German soldier-artist participant. These provide additional context to the description of the winter conditions under which the fighting occurred.

The most outstanding highlight is a color folio of German and American armored vehicles and aircraft specifically employed in the campaign, produced by illustrator Claes Sundin. The appendices include military unit structures and technical tables of the varied weaponry used by both sides. Prior to the text is a glossary and guide to abbreviations as well as an approximate comparison of German Army, Waffen SS, and American military ranks.

The oddities are not necessarily criticisms. One immediately notices the size and unusual layout or formatting of the book, having the look, feel and heft of an academic textbook, and the fact that the author’s notes come after, not before, the lengthy bibliography of primary and secondary sources.

It is also somewhat odd that the author describes German military unit designations as, for example, 267. (note the period) Volksgrenadier Division while those of the U.S. Army are 28th Infantry Division, etc. That period can be somewhat distracting as one proceeds through the text. In any event, uniformity in designations is preferable and makes for smoother and easier reading.

As for shortcomings, it is apparent from the text that English is not the author’s native language; Bergstrom being credited with the translation from Swedish. A reader will notice some awkward sentence structure, what could be construed as missing punctuation which can alter the context of a sentence and, in a few instances, apparently incorrect usage of terms, e.g. severe for sever, punctuated when punctured seemed to be intended.

Finally, it is superfluous to say one is awarded “with” a decoration for valor. A native English-speaking proofreader or editor could have corrected these anomalies for the smoother and easier reading mentioned above and overall improved product.

In any event, Bergstrom has certainly done his research and managed to cover all the bases in his work. He describes the little known use of German U-boats in the Atlantic Ocean for weather reporting to help determine the most propitious date to launch the offensive and the Luftwaffe’s surprise 1 January 1945 Operation Bodenplatte, resulting in the destruction of hundreds of Allied aircraft on the ground.

Along the way, he analyzes the objectives, failures, strengths and weaknesses of the respective armies. In particular, he lauds the Germans for the complete surprise which their offensive attained while he derides their tactical shortcomings on the ground and in the air.

He criticizes the weakness, incapability and confusion in the Allied command structure for many of the initial failures. Yet, he interprets Allied efforts as being much better fighting on the defensive, having recovered from their initial surprise, as the German attack proceeded than the counter-offensive efforts by George Patton and Bernard Montgomery to pinch off the “Bulge”.

Even as their offensive momentum slowed and was eventually lost, the Germans’ ability to resist the stronger Allied forces with formations which were severely depleted in manpower and lacking in fuel for vehicles forced the Allies to fight for virtually every village, crossroad and water crossing.

The author gives most of the credit for Allied success to the superior tactical and even strategic air forces employed (once the weather cleared up sufficiently) and the artillery and prodigious quantities of ammunition available for delivery against the Germans.

The ultimate objectives of the German campaign, reaching Antwerp and splitting the Allied front in two as in 1940, were realistically unattainable for the reasons specified by Bergstrom. Any strategic success lay in the fact that it did manage to somewhat prolong the war. In the end, as he points out, the real winners were the Russians who took advantage of Allied setbacks in the Ardennes to capture Berlin and the eastern half of Germany.

For those interested in this critical campaign, this volume is recommended.