The Archive of Alternate Endings 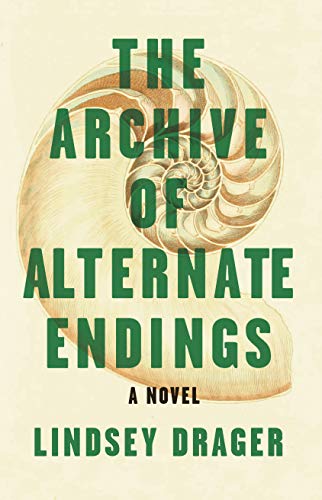 “Drager’s intoxicating novel presents itself like the box in Schrödinger’s famous cat experiment. Until you open the box, the cat is both alive and dead. Drager seems to be saying that ‘We are part of a system, for better and for worse.’ A system that includes labyrinths and dark forests as well as siblings, light, and houses made of ginger bread.”

“What we call the beginning is often the end. And to make an end is to make a beginning.” T. S. Eliot, Little Gidding

No stranger to experimental fictions and wild leaps of imagination, Shirley Jackson Award Winner Lindsey Drager offers up a fascinating narrative of beginnings that could possibly be endings and endings that may in fact be beginnings as her third novel, The Archive of Alternate Endings, moves back and forth through time and space between the years 1378 and 2365.

The novel opens alternating between the story of the Brothers Grimm as they set about their project of listening to folk and fairy tales, eventually focusing on their response to an as yet unheard version of “Hansel and Gretel” and a homosexual encounter between a dancer and a computer programmer in ’80s New York.

In linking such disparate subjects, Drager’s point is “That nothing in this life is unbent, and as such all things intersect.” The 75-year circuit of Halley’s comet connects these stories, just as it is also a metaphor for story and the act of story creation, the slow accretion of facts and fictions, truth and lies, that, like the ice and debris on the comet, both accumulates over time but also disperses, leaving a wake of alternate versions in its path.

Interestingly, it is Edmund Halley’s niece who early in the novel sits on Halley’s knee and provides both the inspiration for his later discovery but also the governing metaphor of the novel:

“When the world began, there was a single mass of rock. But because of different kinds of force and power, as years went on the pressure grew and boiled and pushed and bred until one day it broke. And when it broke, the rock dispersed into a million smaller rocks, and every small rock called the  others his brothers and sisters . . . The Earth and the Sun are siblings, born from the same family.”

In Drager’s capable hands the reader watches in wonder as each new version of the classic fairy tale unfolds, beginning with “a story about a boy who loves boys and the parents who abandoned him because of it.” Jacob and Wilhelm Grimm are troubled by the story, playing on historical speculation that Jacob may have been gay. In Drager’s version, they choose to edit out the transgressive theme of the story in order to protect Jacob. It is not the only time we see others editing or erasing homosexuality.

In yet another version that alternates with the story of Halley and his niece, the reader learns of a female illustrator living in an insane asylum in Georgia in 1910. She was put there by her father because “she lived in a commune with other artists, and there she experienced long evenings of wine and women.”

After having a brief fling with a female nurse, the illustrator escapes from the asylum, leaving behind her own illustrated version of “Hansel and Gretel” as a gift to the nurse, a gift that honors their love.

Like Halley’s comet, the story of “Hansel and Gretel” returns in its many forms throughout the book, connecting the lives of the characters, Hansel becoming a stand-in for all gay men, and Gretel and the witch morphing into models of empathy as they take care of the dying men in 1980s AIDS’ America.

“Hansel and Gretel” is, at one level, “a story about the way the body aches to be satisfied, and how we call this both hunger and desire.” In Drager’s capable hands, it is also a story about our need for stories to lead us into the woods, to carry us into those dark places we can’t look at or talk about directly. The AIDS epidemic for example. In this way, the spiders, spiderwebs, and breadcrumbs that appear over and over offer up a metaphor for our need to order, to make sense of the dark forest. But the labyrinths we create in trying to organize the darkness have a price.

“Labyrinths incite fear because they are not by design linear. People are afraid of experiences that are not linear, experiences that deviate, diverge, digress.” Labyrinths, like Drager’s own novel, don’t have a clear beginning, middle, and end. Yet, they are essential to us if we are to grow as human beings, if we are to engage in empathy. “There are two kinds of labyrinths: those you are born into and must escape, and those you choose to enter in search of what lies inside.”

Drager’s intoxicating novel presents itself like the box in Schrödinger’s famous cat experiment. Until you open the box, the cat is both alive and dead. Drager seems to be saying that “We are part of a system, for better and for worse.” A system that includes labyrinths and dark forests as well as siblings, light, and houses made of ginger bread. We need stories to open both choices to us, to show us a path where we can live in the paradox of a life that contains both light and darkness. As Drager reminds us, “What is a story if not a safe harbor for our most disturbing imaginings?” What a pleasure it is to enter the safe harbor of Drager’s novel.