The Apprentice: My Life in the Kitchen 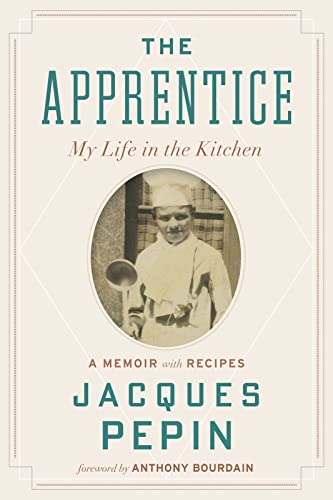 The month of January is dedicated to hitting the reset button. With the stress and hyperactivity of the holidays now behind us the stillness of January—a month that sometimes feels interminably long—affords us a chance to take stock of our lives. It’s a backward glance that allows us to reassess and sweep up some of the detritus that has trailed behind us for too long.

For us home cooks, this usually includes some time pondering our approach to cooking. Less about making resolutions to cook more healthfully, it is more about reconsidering our overall cooking values. Like all values, what matters for some cooks matters less to others, and inspiration comes in many guises. But a backward glance is often just the inspiration we are looking for to jumpstart a new year of creativity in the kitchen.

Enter Jacques Pépin. His memoir The Apprentice, which was first released in hardback in 2003, has just been re-released in paperback to coincide with the celebration of his 80th birthday. It is well worth revisiting.

Mr. Pépin is a perennial favorite on PBS cooking shows. By now, not as young or glamorous as many celebrity chefs or TV cooking stars, Jacques Pépin has what many others do not: a big heart and a quiet mastery of technique that puts even the most anxious cook among us at ease. Watch any episode of a Jacques Pépin cooking show and you will find yourself thinking, “Hmm, I can do that!” That is his teaching gift at work. (He’s also got that adorable French accent going for him.)

What sets his memoir apart is mainly in the title itself: an apprentice is someone who by definition is a beginner, and it is that beginner’s openness to learning that has defined both Mr. Pépin’s career and his teaching style. True to his apprenticeship roots, he is there to demonstrate his knowledge and proper cooking technique so that we can duplicate it in our own kitchens. Watching him over the years, you get the sense that he is always learning about new ingredients or styles of cooking. Beyond the kitchen, though, you could say that Mr. Pépin approaches life itself as one long apprenticeship, which is, of course, the deeper meaning behind the title of his charming memoir.

Jacques Pépin was born in France, grew up in the war years, and made his way as an apprentice through the ranks of several haute cuisine kitchens in his native Lyon and then Paris. As he freely admits, working in a kitchen was considered blue-collar work. Even during his stint as chef to the French president during his obligatory time in the military, Pépin writes that his position “in the context of the time, [was] not prestigious in any way.”

He began his career before he finished high school (although he later earned a degree from Columbia University) working long hours for little pay but steadily advancing through each station of the kitchen learning every aspect from butchering to grilling and roasting to making sauces and everything in between. It was a humble existence and one in which, as an apprentice, he learned by observing and then doing.

The road to success is long and hard, and there are many setbacks along the way. In Pépin’s case, had it not been for a serious automobile accident that kept him from long days in a restaurant kitchen he might never have begun teaching.

Yet Jacques Pépin also had the great good fortune to arrive in New York just as the American culinary revolution was getting underway in the early 1960s. His first job was cooking under Pierre Franey, the former New York Times food columnist who at the time was running the well-known French restaurant Le Pavillon.

The group of tastemakers in the American food scene was very small back then, and Pépin soon found himself in the midst of all of them: Craig Claiborne, James Beard, Helen McCully (editor of House Beautiful), Julia Child along with New York chefs like Pierre Franey of Le Pavillon, Jean Vergnes of Le Colony, and Réné Verdon who was chef at the Kennedy White House (a position that Jacques Pépin turned down).

Those were heady times, and while reading The Apprentice it will dawn on you that Jacques Pépin is the last living link to that remarkable time when American cooking began to change for the better.

However, this isn’t a gossipy, tell-all memoir. Everyone is treated even-handedly with warmth and genuine tenderness. (The passages of Craig Claiborne’s descent into bitterness and alcoholism is handled with utmost respect for all that Claiborne had done for the young Pépin when his career in New York was just beginning.)

And there is only one soupçon of envy directed toward Julia Child that comes midway through the book when he writes upon reading a manuscript of her now famous Mastering the Art of French Cooking, “I was a little jealous. This was the type of book I should have written.”

Still, Pépin went on to have a warm collaboration with Julia Child that led to several TV appearances with her—including, as it turns out, the famous incident where Julia Child nearly severed her finger just before live TV that went on to become the hilarious sketch on SNL with Dan Akroyd playing the wounded Julia who calls out as she collapses, “Save the liver!”

There are many wonderful anecdotes woven into the pages of The Apprentice, but the common thread is Jacques Pépin’s sunny optimism and generosity toward all those who have helped him along the way.

In addition to all the supporting characters that make Jacques Pépin’s life story so interesting, there is also an underlying narrative about food trends. For every generation and at any given moment in time we tend to think that we are forging new ground when in fact, again and again, what is old is new again.

Take this bit of trivia for instance: there was a period of about ten years in the ’60s and early ’70s when Jacques Pépin actually worked (along with Pierre Franey) for Howard Johnson of the eponymous restaurant chain. Back then (believe it or not) Johnson hired these two Frenchmen to design menus and take part in designing “the technology that could produce food of a consistent quality that in turn could be prepared by relatively unskilled cooks toiling in outposts of the chain far from the commissary kitchens in which the dishes were originally made.” (Did you know that HoJos was ground zero for the restaurant chain concept?)

Moreover, the mandate was to serve top quality food. During Franey and Pépin’s tenure at Howard Johnson’s they reworked the restaurant’s popular clam chowder. “Out went the chowder’s dehydrated onion flakes, and in went fresh onions. Real potatoes replaced frozen ones. We put in garlic instead of garlic powder, butter rather than margarine. The texture became lighter and livelier with the addition of real stock. Fried chicken underwent a similar metamorphosis.” We are talking about the 1960s, people!

Of course this trend toward quality didn’t last once Howard Johnson’s was passed on to the next generation—the reason Pépin ultimately left—but the pendulum has swung back yet again. Doesn’t this sound a lot like the changes that are now being made to enhance the quality of, say, McDonalds?

Then there’s the subject of foraging. Long before René Redzepi made foraging cool at his über high-end restaurant, Noma, in Copenhagen, Jacques Pépin and his coterie of French friends were foraging for food and cooking it up at their weekend retreats in Hunter, New York (just like generations of European cooks before them).

Which brings us back to the notion of taking a backward glance in order to move forward. Forget about frantically looking for the next best thing. It has probably already been done. Instead, stay rooted in what you know, keep it simple, and cultivate your inner apprentice.

“My cooking today is certainly not purely French,” he writes, “or purely anything. It is modern American cuisine with strong French influences. I like straightforward food that is well seasoned and elegantly presented, without fuss or deception.”

While certainly not the best-written chef’s memoir you will ever come across, The Apprentice is a thoroughly entertaining way to find kitchen inspiration in the New Year. Accompany it with a few episodes of Jacques Pépin’s valedictory PBS series Heart and Soul in the Kitchen (which can be watched online) and you will conclude that while he may have been born in France, Jacques Pépin is truly an American treasure.