The Appalachian Trail: A Biography 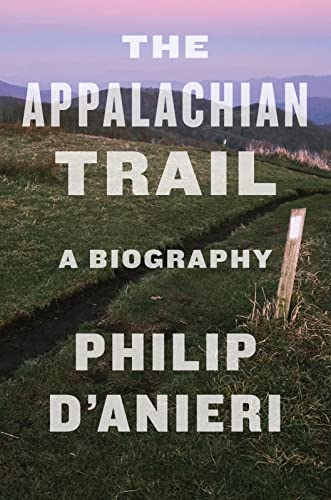 “Anyone who has walked even a short section of the Appalachian Trail or the Pacific Crest Trail has stepped into this dimension, which is nature’s gift to the human soul.”

“A simple footpath on which to become re-grounded in the world.”

The story of the Appalachian Trail (AT) is the story of how a portion of the American wilderness became an expansive American playground. The story, as told by Philip D’Anieri in his well-researched account, unfolds through the lives of a series of men and two women who built doggedly on each other’s work to turn a concept into a reality.

One sees in the stages of the trail’s evolution our country’s development from a largely agricultural landscape to a technologically complex, highly specialized society in which distinctions between rural and urban, natural and artificial, have begun to blur. One can also find in this story a model of how our federal system of democracy, which seeks to integrate national, state, and local interests, can be made to work when all participants share a common goal.

The roots of the trail are found in the 19th century, in the passion of an immigrant Swiss scientist, Arnold Guyot, who developed a love for the Appalachian Mountains after visiting them not long after his arrival in the United States to take up a position at Harvard University. He spent ten years doing field work, taking measurements and mapping the entire system, before publishing “On the Appalachian Mountain System” in the American Journal of Science and Arts. The year was 1861, as the country joined by this geographic feature was about to split asunder in the Civil War.

The next person to seize the baton in the relay was Horace Kephart, a librarian turned outdoorsman who left his family and his plum job in St. Louis to take up camping in the western mountains of North Carolina. There, he gathered information about living in the great outdoors that he published in The Book of Camping and Woodcraft. The book became an instant bestseller, riding the wave of popularity propelling the back to nature movement that swelled in the early 20th century as a reaction against industrialization.

Kephart’s large following of outdoor enthusiasts qualified him to become a Director of the Appalachian Trail Conference, which had been formed in 1925 to coordinate the activities of local AT clubs that were springing up all along the trail’s north-south corridor. Kephart’s influence reached into the United States Department of the Interior and was instrumental in the creation of the Great Smoky Mountains National Park, through which the AT passed.

James Taylor, a resident of Vermont, exemplified the kind of civic activist and booster behind the formation of local AT clubs. Taylor persuaded his state’s forestry department to cut a 100-mile trail linking Mt. Mansfield with Killington Peak, and then raised the funds to pay for it. This trail became a model for the Appalachian Trail.

The vision for an Appalachian Trail that would serve as a geographic and cultural unifier for 14 eastern states came from a US forester named Benton MacKaye, founder of the Appalachian Trail Conference. His vision was grander than simply piecing together a long hiking trail. He saw the trail as the prototype of a regional planning process that would create sustainable human communities whose commercial enterprises would harmonize with their surroundings without defacing them. In this sense he was a forerunner of the ecological mindset that guides the modern environmental movement.

MacKaye laid out his vision in an article published in October 1921 in the Journal of the American Institute of Architects, “An Appalachian Trail: A Project in Regional Planning.” He later founded The Wilderness Society.

If MacKaye, through his vision of coordinated planning, was the father of the Appalachian Trail, its “mother” was Myron Avery, a lawyer and organizer from Maine who worked tirelessly through the Appalachian Trail Conference to coordinate the activities of local clubs and establish uniform standards for trail building, management, and maintenance. Under his vigorous leadership the trail was completed in 1937.

With the onset of World War II the trail faded temporarily from the national consciousness and fell into neglect. Interest was revived when in 1948 an Army veteran seeking to shed unwanted memories of the war made the first through-hike from Georgia to Maine. But the trail he found bore little resemblance to the one completed a decade earlier. With maintenance on pause, nature had reclaimed large swaths of the corridor through blowdowns, erosion, and overgrowth.

But the publicity Earl Shaffer’s trek brought to the condition of the trail created the impetus for federal protection. Suburban sprawl powered by the rapidly expanding US post-war economy was threatening the scenic features of the trail. A second through-hike in 1954 by Emma Gatewood, a 60-year-old grandmother who walked in sneakers carrying a small duffel bag, became a big national story when she was featured on the Today show, and prodded the federal government into action.

Gaylord Nelson, a Democratic Senator from Wisconsin who had built a broad base of support in the fledgling environmental movement, authored legislation that established a National Scenic Trails System, with the eastern Appalachian Trail and the western Pacific Crest Trail as bookends. The National Park Service became the federal steward of AT, and partnered with the Appalachian Trail Conference to enhance, protect, and maintain the trail. This public-private partnership—with the government providing funding and legal clout, and local volunteers doing the leg work—continues today, a model for democracy.

Thanks to Bill Bryson’s bestselling book A Walk in the Woods the trail has now passed into American folklore. In 2015, Robert Redford’s film version of the book was released, cementing the trail’s iconic status as America’s preferred strolling grounds.

D’Anieri relies on written source material for his biography of the Appalachian Trail. Each chapter is a mini-biography of the men and women who advanced its development. The book can be dry and tedious in places as the author leads us through the bureaucratic paper trail. And he employs the same narrative structure for each chapter, which makes them seem copies stamped from the same template, differing only in the details.

Fortunately, this pattern is broken in the final chapter, when D’Anieri visits the trail, hikes sections of it in five-to-six hour stretches, and gives the reader a physical sketch of the contemporary trail in all its diversity, from sidewalks along Interstate-80 to remote ridgeline pathways with stunning views.

But in the end, this is a book for readers interested in the history of the trail and the politics of its evolution, not the experience of immersion in nature. Nature lovers thirsting for a taste of the spiritual dimension of the great outdoors must look elsewhere—to Thoreau, perhaps, or to Norman Maclean’s A River Runs Through It. Anyone who has walked even a short section of the Appalachian Trail or the Pacific Crest Trail has stepped into this dimension, which is nature’s gift to the human soul.