The App Generation: How Today's Youth Navigate Identity, Intimacy, and Imagination in a Digital World 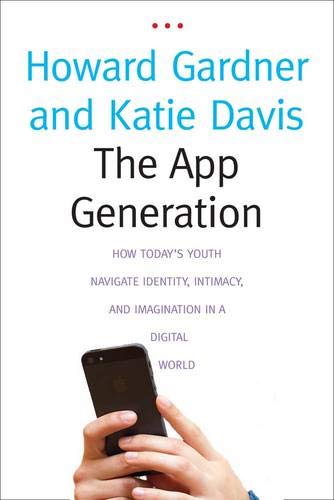 “. . . young people today have the greatest communication and creativity tools ever devised, but the stuff they’re creating stinks.”

In 1967, the so-called Summer of Love, British poet Philip Larkin wrote these memorable words in a poem called “High Windows:”

When I see a couple of kids

And guess he’s fucking her and she’s

Taking pills or wearing a diaphragm,

I know this is paradise

This poem proves that there’s nothing new about the older generation having a prurient interest in the sexual mores of the young. Two new books, reports from the front on this very topic, suggest that we’ve moved from the Summer of Love to the Winter of Whatever.

Howard Gardner and Katie Davis, two Harvard educators, have given us The App Generation: How Today’s Youth Navigate Identity, Intimacy, and Imagination in a Digital World, which details the depressing inner lives of young people who have been raised on smartphones. They coin the term “app generation” to define young people who experience life primarily through the apps on their iPhones or tablets.

Apps are terrific at solving problems, like how to find Aunt Millie’s house or how to find someone to have coffee or sex with. But because they solve problems without much involvement from the user’s brain, they end up having a much more damaging effect on people, especially young people, than we might have guessed.

App generation types are stunted in terms of their ability to define their own identities, express their creativity, or interact meaningfully with others. Since they primarily experience life not just through a screen but through a problem-solving device, they are not adept at defining or solving problems for themselves.

They may be good at developing what the authors call a “Super App”—a somewhat rigid and uncreative life plan that will carry them from where they are now to supposed financial fortune and even bliss ten years out. But on a day-to-day basis, their lives aren’t so great.

Relationships among young people aren’t exactly improving as a result of apps, the authors report. They suggest that young people have a greater acceptance of individuals with different lifestyles, sexual orientations, religions, or races. The problem is that this greater level of acceptance comes along with a much more shallow understanding of what those differences really mean. Ignorance, not wisdom, lies at the heart of nonjudgmental thinking. It’s a step in the right direction, but a much smaller step than people may realize.

Gardner and Davis report that creative written work by young people today is far less interesting than a generation ago, more derivative, more sloppily written, and more likely to include foul language. Music and art fare no better in the app world.

Apps certainly enable creativity, but they also thwart it, forcing users into pathways that the app designers have themselves created. In other words, young people today have the greatest communication and creativity tools ever devised, but the stuff they’re creating stinks.

The ubiquitous use of communications technology also creates huge problems for young people. Facebook is actually depressing, the authors suggest, because everyone else is presenting such happy, fun existences, and individuals viewing all that reported happiness feel more miserable by comparison.

Walking the dog—an actual dog, not a dog app—was once a time for quiet reflection, but that’s no longer the case. If you’re walking your dog, you’re probably texting or otherwise using your mobile device, meaning that independent thought is a distant memory.

Sex may be easier to come by for the App Generation, but it isn’t necessarily a better deal. We’ve all heard of sexting, in which people photograph their naughty bits and send them to friends. There’s an app called Snapchat that causes photos to dissolve after just a few seconds. Some young people view this as an opportunity to sext without creating a permanent record. The problem is that other young people are taking photographs of the nude photos and then posting their photos of the Snapchat photos online. Are you following all this? Short answer: It’s a mess.

The most striking thing in the book was the reality that if you wanted to communicate online with someone and offer eye contact, you had to look not into the other person’s eyes but into your camera. As the authors wrote, “In other words, to create the illusion of eye contact, one must actively avoid it.”[1]

It gets worse. Boston College applications were down 26 percent after requiring a 400-word essay; apparently, the very idea of writing 400 words about why you wanted to attend Boston College dissuaded one quarter of applicants from even filing the paperwork.

Young people today are far more likely to say, “did you see something” versus “did you hear something” or “did you read something.” In a visual culture, nobody seems to be reading very much.

On top of that, people end up with fewer real friends with whom to talk through important life issues because they spend so much time developing thin-sliced relationships online.

Put it all together and the “youth” that Gardner and Davis diagnose seem to be worse off for their ongoing encounter with technology instead of happier, smarter, or more satisfied.

The conclusion of the book, an essay that starts off comparing A Clockwork Orange to Flaubert’s L’Education Sentimentale and then comparing them both to Brave New World, reads like something I might have written for sociology class around two in the morning the day the thing was due. The book ends with a preening Gardner breathlessly reporting a conversation he had with his six-year-old grandson, who is just as much of a tech whiz as Gardner himself, much to the old professor’s delight.

Ironically, the book was published by Yale University Press, which makes one wonder why Harvard didn’t publish it. I’m sure thereby hangs a tale.

Southwood depicts her emotional struggles with her fiancé’s day job in terms that create a high level of empathy. It’s hard not to feel bad for someone who describes her own body as something totally un-porn-star-like, knowing that the person with whom she’s going to spend the rest of her life, not to mention any given evening, is being paid to memorialize some of the hottest women in the world having sex.

The book is by turns extremely revealing and extremely depressing. Southwood never seems to come to terms with her fiancé’s work (or with her own heavy drinking, for that matter). The author, presumably like many of her generation, at core lacks the self-awareness to realize that this is a dilemma that she should never have had to ponder.

If the generation that prides itself on being nonjudgmental is going to have a happy internal life, then at some point they must discern that some choices are not just wrong but downright stupid.

I’d keep on going, but I have to walk the dog.