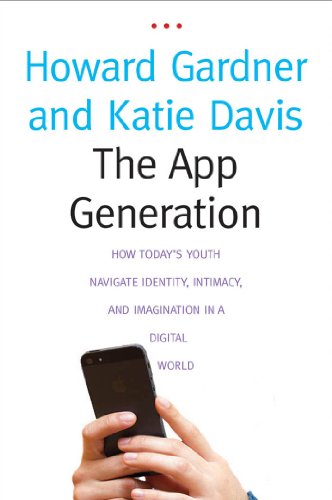 “. . . conceptualizes the issues of our time and may well be seminal in our understanding of today’s youth.”

Were adults in the 1920s concerned about youth exposure to Flappers, bootleggers, and libertine morals? Were adults in the 1950s worried about the effect of television, particularly extensive viewing, on children? Were adults of the 1960s fretting about free love, violent protests, and a perceived breakdown of traditional values? The answer to all three questions is surely “yes.” Yet society has survived and in many ways prospered.

Howard Gardner and Katie Davis in their book The App Generation: How Today’s Youth Navigate Identity, Intimacy, and Imagination in a Digital World investigate a similar and perhaps even more significant change in the beliefs and behavior of youth and young adults.

In an engrossing and eminently readable book they seek to define the traits which in their eyes, have created a new “generation.” This new “generation” caused by the rise of technology, is proposed as a similar yet more profound grouping than Generation X, Generation Y, and Millennials that have been defined over the past 50 years.

The book takes information from focus groups, interviews and comments of teachers, camp counselors therapists and the youths themselves to identify the significant changes that are coloring the personalities and behavior of tomorrow’s adults. Unlike previous groups, the members of the App Generation have had technology and social media as a staple of their existence and have never known a universe other than that dominated by mobile devices, computers and social media. While potentially positive changes that may occur with this generation are repeatedly pointed out, it is not hard to read between the lines that the authors are more worried than reassured.

The book focus on three I’s—Identity, Intimacy, and Imagination—and categorizes its ideas through the personae of the two authors and Katie’s younger sister Molly—a three generation narrative. Mr. Gardner, the senior author, came to technology relatively late in his life. Ms. Davis, growing up in Jamaica, did not seriously utilize and confront technology until her college years. Molly at age 16, however, has been immersed in and imbued with social media and mobile technology since birth.

An “App” or “application” is a software program often designed to run on a mobile device that allows the user to carry out one or more operations in the manner of a “shortcut.” An application takes a person quickly and directly to whatever information, task or site one is seeking, without need to search the Internet or look into one’s own experience.

In addition to individual apps, the authors speculate that the lives of the App Generation are governed by a lifelong cradle-to-grave App or “super app.”

The major question of the text is whether youth are becoming “app enabled:” encouraged toward free thinking, forging new paths and deeper relationships. Or do these individuals become “app dependent:” limited by the nature of the app as constructed by the software engineer. While a number of apps, particularly those in the artistic and creative realm, appear to encourage action and exploration, the vast majority contribute to a restriction of personality and behavior.

The App Generation begins to become populated by tall and narrow silos, consorting only with like-minded individuals. Supporters of the computer revolution suggest that such narrow and specific applications free the individual from mundane and unnecessary tasks to focus on bigger questions. But do individuals follow through with this exploration or do they become constrained by their own technology?

A similar but much smaller conundrum was present in the 1970s with the development of the electronic calculator. While many people felt it would relieve the burden of tedious and potentially erroneous mathematical calculations, other people worried that the country would lose its ability to balance a checkbook or count monetary change. There is little doubt looking back that these fears were unnecessary and that life was enhanced by the calculator not diminished.

On the issue of individual identity, the hypothesis of the book is that identities are becoming more packaged and restricted without a focus on inner life, personal conflicts, or struggles.

Members of the App Generation are shown to exhibit less and less risk-taking and are only willing to show an outer shell of a polished self. With the emphasis on communication via social media these youth are less focused on inner development and feel insecure about a lack of self-identity.

Many in the he App Generation show an increased acceptance of cultural differences and lifestyle differences, but have minimal understanding of how such differences occur and what they mean.

The risks inherent in the Internet and social media have made individuals less trusting of others than previous generations. The decrease in risk-taking has led to a decrease in true connection with other people and a feeling of isolation and decreased empathy, even though it appears that such individuals are connected in ways that could not even be imagined in the past.

Computers potentially lower the bar for entry into creative pursuits and “widen the walls” for youth creators, but it is suggested that creativity and complexity may actually be diminished by the narrow bounds of these apps.

Artistic and creativity apps appear to enhance human potential however as the authors relate, such creativity is often relegated to reaction rather than independent action, and remixing rather than invention. Apps are dependent on the coding of the programmer.

Life is viewed as a series of apps. One’s life course becomes a giant paint-by-numbers canvas with the elements pre-circumscribed by the apps. Worry exists that apps do not create new opportunities for deep understanding, but rather offer quick fixes and short cuts. Nowhere is this more evident than in the ability to collect and collate large databases via the computer applications.

Such apps do not, however, regularly encourage interpretation and in-depth thinking about the meaning of the data.

This book should be on the reading list of anyone involved in youth interaction: teachers, healthcare providers, parents, and counselors, as well as young adults themselves. The App Generation not only opens up new avenues for understanding youth psychology, but it also causes those of us who have already been immersed in technology to consider what effects on our own personalities this change may have had.

While at times, the text drifts into Ivy League verbiage of “congeries,” “digerati,” and “tractable challenges,” it remains quite readable.

It lacks truly large-scale studies to support the conclusions drawn, but the breadth of data types that form the basis for the authors’ conclusions is sufficient and convincing.

There is little doubt that this subject will be chronicled many times in the future, although this book has the advantage of being senior—authored by someone whose adult development occurred pre-technology. A life not originally and thoroughly colored by the computer revolution will quickly be unknown to subsequent authors, who then must only extrapolate and guess as to what previous generations thought or did.

Overall I recommend this book highly. It conceptualizes the issues of our time and may well be seminal in our understanding of today’s youth. As has occurred in the past, one expects, or perhaps hopes, that society will adapt to and incorporate these changes for the better as the 21st century unfolds.