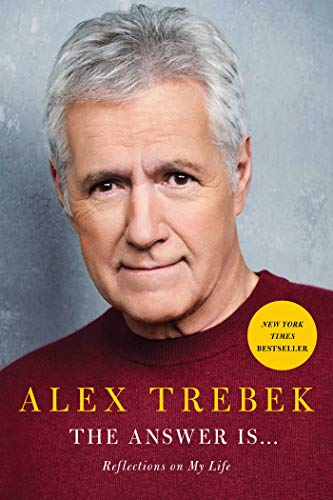 “This is not going to be a standard memoir. We’re just hitting the highlights. It’s a series of quick look-ins, revelations. It’s an aperçu of Alex Trebek, human being.”

The son of a Ukrainian immigrant father (George Edward Terebeychuk) and French-Canadian mother (Lucille Lagace), George Alexander Trebek was born in 1940 in Greater Sudbury, Canada. Alex’s father became a co-head chef at the Nickel Range Hotel, where Alex spent a good portion of his youth.

Trebek had a younger sister, Barbara, for whom he served as a great protector. During high school, he was sent to a religious boarding school that he learned to love. A bit later, his parents divorced, and they moved with his mom to the United States, while his dad remained in charge of a restaurant in Northern Ontario.

Trebek did not fare well in military college, so he left without graduating, with his father’s consent. While his mother was living in Detroit, he remained in Sudbury, Canada, to be near his dad. His mother worked as a governess and had given up a baby for adoption.

At high school graduation, in “grade thirteen,” after having stayed one year extra, one of his teachers urged him, “Alex . . . Never lose your love of life.” Trebek moved on, in poverty, to the University of Ottawa. In junior year he got a job with a radio station in Canada during Christmas holidays.

Around graduation time, he got a job as staff announcer with the CBC. Soon, he was transferred to Toronto to work on a teenage music show where he learned much. “Messing up on live TV taught me . . . learn to laugh at yourself.” At the same time he also hosted a teenage quiz show, which ultimately proved to be a good career precursor to Jeopardy!

Trebek then moved on to a job in Los Angeles on a 1970s game show. An near teetotaler, he once unknowingly had a bad trip with some hashish brownies because he loved chocolate and ate five.

In 1974, Trebek married his first wife, Elaine, who had a six-year-old daughter. The marriage lasted only four years, but they remained friendly.

Trebek met and married his second wife, Jeanie, in 1990. They had two children, Matthew and Emily. Interesting fact: Jeopardy! is only taped two days per week, and only for a total of 46 days per year, leaving him with much time to spend with his family.

Trebek believes in Malcolm Gladwell’s belief that one becomes a master of their trade after 10,000 hours of practice. After hosting many shows, Trebek received an offer to host Jeopardy! He also became involved in charity work through World Vision.

Trebek’s advice for Jeopardy! contestants: “Wait for your chance. If it’s a category you don’t feel confident in, lay back for a while . . . Why place extra pressure on yourself?” He should know; he’s been host for 36 years, despite the fact that he once considered becoming an actor.

He’s often asked questions by the studio audience. For example, “Who do you think should replace you?” Trebek once quipped, “Someone younger. Someone brighter. Someone funnier. Betty White.”

When recently diagnosed with pancreatic cancer, Trebek stated that each experience is individual: “It’s a personal choice, and that choice doesn’t make you more or less brave than someone else.”

When his time comes, he says he would like to be remembered, “as a good and loving husband and father . . . who did his best to help people perform at their best. Because that was my job.”

In the meantime, because his book was completed during the coronavirus outbreak, he had wanted to reserve a movie theater just for his wife and two children. That didn’t work out. But instead, Trebek says, he’s happy just to go for a walk or perhaps sit in his backyard swing and observe the beautiful view.

The reader will note that each chapter is titled with an answer, replicating the game show, Jeopardy, in which questions are answers, and answers must be in the form of questions. Each chapter title, or answer, is delightfully followed by a corresponding tale from Trebek’s colorful life. His legacy might be, “The world is a better place in which to live and a safer one, too.”