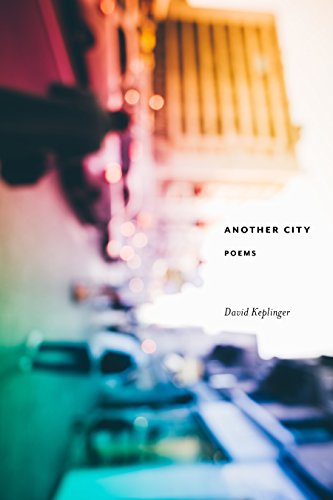 In his 1980 Nobel Lecture, Polish poet Czeslaw Milosz said that the poet’s true vocation is to contemplate Being. David Keplinger does exactly that in Another City, his fifth collection of poetry.

The speaker of these poems is trying, through careful observation and meditation on people, places, objects, literature, and events important to him, to understand how he has arrived where he now is.

He reflects, as though through the lens of a microscope coming into fine focus, on the smallest detail (‘’the closed hood/of the mushroom’s umbrella at night” in “Letter from Rock Creek for Mary Oliver”) then pulling back out of focus, to larger ponderings (“Because I will be always. Because I will be/always. Because you suddenly let go of time” in “Preservation”).

At times, the speaker performs a double role, both in the moment of the experience and then with the wisdom gained from reflecting back on the experience, often with feelings of loss and loneliness.

If this collection were itself a poem, its chosen form could be the villanelle: not for the form’s strict reliance on rhyme, meter and repetition of lines, but on content. The villanelle’s form best suits content in which the speaker wrestles with an abstract problem or question to which there is no clear answer. The strict form allows for looking more deeply at the problem from different perspectives. By poem’s end, no resolution is illuminated, but there is, at very least, new understanding revealed.

In this sense, Another City, keeps digging and digging, the question always how did I end up here? What do all these moments add up to? If there is any answer to these questions, it is in “Her Sums.” In that poem, the teacher asks timid quiet June Anne, “what’s the distance from zero to one?” The girl says nothing, still traumatized, presumably, by her father’s fall from a horse and subsequent death. The speaker knows the answer, screaming in his “thinking voice.” “It is infinite!”  Even as a young schoolboy, the speaker knows the answers (to life) are too big to comprehend.

Another City cycles forward, from City of Birth, to City of Texts, arriving, finally at City of Domes. The first poem of the collection sets the tone for the speaker’s loneliness. He is struggling with the vulnerability of being born and being seen.  Birth, to him, is a wound ripped open, “the gash of being seen,” as though he would prefer to remain anonymous, if not invisible. The speaker struggles with the loneliness of both being seen and not being seen.

Topics in this collection are varied, as one might expect upon a reflection of one’s life. “Three Feasts: Simone Weill” references Weill’s intentional starvation while in an exile camp: “To eat/is to sing in a slaughterhouse at the top of one’s lungs.”

“A Young Man’s Copybook: 1861–1864,” a several-part series, notes the poems are after Keplinger’s great-great-grandfather’s experience with wrongful accusation of and incarceration for desertion.

In “The Dead on Culpepper Road,” one of the series, “It had become the natural thing./Dead animal smell.” Walt Whitman, who visited soldiers in a hospital in Fredericksburg, makes an appearance in this series:  “He kissed us on the/forehead, then on the lips,/then on the cheek.”

For each forward movement through the Cities, there are equal closings or missed opportunities. In “Chance,” the speaker loses a chance at romance and shares a bed with the girl and her lover. The speaker’s “narrow bed pulls out like a drawer,” something that can be shut to keep him out of view.

And in “Eating Outside,” the speaker finds a tiny café in a hole under the café table. He goes down into the cafe, then leaves “as silently as I came,/like shutting my mother’s closets/for the last time.” The speaker in Another City also emotes a sense of missing out, of arriving too late.

In “Mustering Out” (part of the serial “A Young Man’s Copybook: 1861–1864”), “a minuscule/world I could not/touch,” and “But I always arrive at the moment of closing” in “A Poetry Shop in Heraklion,” in which the speaker can see inside the poetry shop and knows the store well, but can’t get in.

In “Empire, Discourse,” the speaker’s father thinks he sees the speaker when the father is in Rome.  The speaker says, “It wasn’t/me. I was in another city.”

This volume comes on the heels of Keplinger’s Art of Topiary (Milkweed Editions, 2017), a translation of the work of German poet, Jan Wagner. After years of immersing himself in another poet’s language and ideas, Keplinger has found new voice in Another City. In fact, the speaker of “Every Angel is Terrifying” (a translated line from Rilke) recognizes something has changed in him after an encounter with a deer gazing at him through the window. After locking eyes with the deer and feeling a spiritual exchange between the two, the deer leaves and joins the herd.  In that moment, the speaker experienced something both terrifying and enlightening, admitting that something has shifted in him and “this was the start of some new work for me.”

Another City ends with “Magic,” in which a lever is pulled, causing the speaker’s mother to tip “backward, out of view.” The emotion of that loss and the ongoing loneliness is conveyed in the action of the lever. The speaker understands his mother is gone, but, seems to hope, as in a magic show, that her body will inevitably return with a wave of colored scarves or puffs of smoke.

In his graduate poetry workshops at American University, while trying to encourage students to emerge from the safety of excessive adjectives or writing that is unnecessarily complicated or confusing, Keplinger often quotes his friend and mentor, Bruce Weigl: “Say it clearly and you make it beautiful.” In this latest collection, Keplinger says it clearly, and he makes these poems sing.

Susan Bucci Mockler is the author of Noisy Souls, a poetry chapbook. She teaches poetry workshops in Arlington, Virginia, schools. Her poetry has appeared in Paterson Literary Review, Poet Lore, The California Quarterly, and other venues. She is recipient of a Washington Post Grant in the Arts.