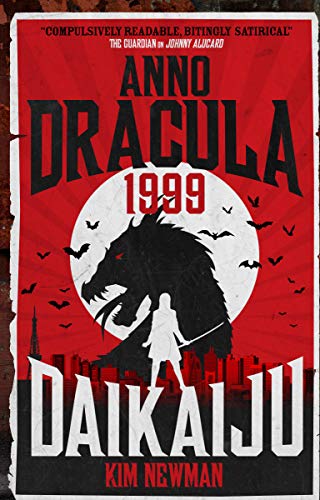 “The story is great fun, full of biting (no pun intended) satire, sharp irony, and witty one-liners, with a well-written storyline that calls for an Action Hero, such as ‘Bruce Willis in a ripped vest.’ It’s a challenge to see how many literary and cinematic vampires one recognizes in the narration.”

It’s 1999, the end of the century beginning when Dracula married into the British royal family and gained control of the world. Everyone who is anyone has become a vampire. It is also the beginning of a new millennium and the expiration of the Treaty of Light made with Christina Light, the Princess Casamassima.

Christina has a Grand Gesture planned for the ending. She’s going to Ascend, building a Better World for All by abandoning her body and seeding it throughout the World Wide Web to accomplish—what?

The biggest New Year’s Eve bash is going on inside the Daikaiju, the princess’ building in Tokyo, shaped like a gigantic dragon. Inside, Hal Takayama becomes conscious, aware he has no idea where he is, barely who he is, and that his left hand has been replaced by a glass one containing a microprocessor answering to the name “Lefty.”

Hal wonders why he also thinks he is someone named Jun Zero.

“It was the kind of ident he would choose if he wanted to sound like an arch-nemesis. Basic Question #2: Who am I? Who is Jun Zero really?”

Hal can only believe his mind was wiped.

“I’m Jun Zero, yes—but I don’t remember being Jun Zero. In my mind I’m Harold Takahama and I make robots for computer games.”

A better question: Why is Hal in Tokyo? He’s from Ojai, California.

“I’ve so few memories. It’s a shame most are of being attacked, barely surviving, running away and wondering what’s going on.”

Inside the Dragon, Richard Jeperson is well aware of his mission.

“Richard is with British Intelligence, specifically the Diogenes Club. His calling was to be well-informed. About everything.”

Tonight, however, things will happen of which Richard has no warning.

Accompanying him is his bodyguard, Nezumi, a vampire in the guise of a schoolgirl.

“Nezumi is ronin, a masterless samurai. She serves her own standard. Mr. Jeperson understood that.”

Everything seems in order; the party’s more or less the usual wild, orgiastic celebrity bash, until just before midnight. Within minutes of the turn of the century and the princess’ Ascent, terrorists take over the Dragon.

None of them are whom Richard expects and all of them are going to be difficult to beat—including Jun Zero.

“In 1969, your basic garden-variety diabolical mastermind trying to take over the world with a super-computer, all it took to thwart their plan was a strategic power cut and a karate chop. Now, there was no plug to pull. The World Wide Web was too vast, too intricate to shut down. There was always a back-up in an anonymous shed in Ohio or the Ukraine.”

Their leader is a surprise also.

“The Brother,” Richard said. “Radu.” Richard suspected Radu’s recent clippings file was slim. Come tomorrow that might change. One way or another, Radu would be famous. If still “the other one.”

Radu’s plan is to kill the princess, and Ascend in her place, becoming more powerful than his brother.

“Radu flattered himself with his affected manner. Was he really in control? It seemed horribly likely.

Richard would have preferred facing Vlad.”

Imagine the delight and surprise of a reader who, having read the original Anno Dracula in 1993, now discovers Anno Dracula 1999: Daikaiju. Then consider the confusion when that same reader learns Anno Dracula wasn’t a standalone but the first in a series with six volumes following and the current story being the latest.

Thereby hangs the problem with reading this novel.

The introduction of characters to the uninitiated is much the same as being presented to people at any large and chaotic gathering. No one knows who is who and even after explanations are given, may not remember them long.

In Anno Dracula 1999, there are quite a number of characters to keep track of.

If possible, it would be best and advisable for the reader to go back and at least peruse the six novels between number one and this one before opening this book.

That said, the story is great fun, full of biting (no pun intended) satire, sharp irony, and witty one-liners, with a well-written storyline that calls for an Action Hero, such as “Bruce Willis in a ripped vest.” It’s a challenge to see how many literary and cinematic vampires one recognizes in the narration, as well as finding the sentences hinting another novel may be on its way.

The reader will probably agree this is the best Anno Dracula entry yet.