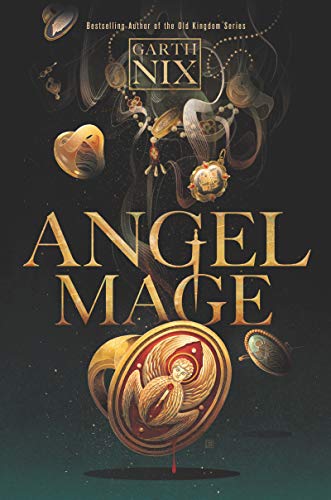 “A rollicking blend of horror story, adventure, and fantasy, Angel Mage rises to a dramatic climax that will satisfy fans of all these genres.”

Readers who enjoy their young-adult fantasies spiked with a healthy dose of swashbuckling will love Garth Nix’s latest novel, Angel Mage. A big fan of Richard Lester’s The Three Musketeers, Nix takes the heart of that movie—the all-for-one spirit, the political machinations, and the sword fighting—and infuses it into a tale of angels and the humans who use their power to work magic.

Although the story gets off to a slow start, thanks to all the world building necessary for putting things in motion, it gathers momentum as it goes, rising to an action-packed, satisfying conclusion.

In the world of Angel Mage, each kingdom is protected by an archangel—except for Ystara, which fell 100-plus years ago under mysterious causes. Most of its citizens either died from the ash-blood plague or turned into monsters called beastlings. A few fled to neighboring countries and now live as refugees called Refusers.

In the kingdom of Sarance, a woman awakens in a crypt. She’s Liliath, an acolyte of Ystara’s disgraced archangel, Pallaniel. A powerful angel mage (someone who uses icons to channel the angels’ power), she intends to bring her beloved Pallaniel back and restore Ystara to its former glory.

As a first step, she enlists the aid of some Refuser criminals called the Night Crew, and passes herself off as a wealthy widow, recently arrived in the capitol. Using angel magic, Liliath seeks the allies fated to aid her in her quest. She locates only four: Simeon, the medical student; Agnez, the musketeer cadet; Henri, one of Cardinal Duplessis’s lowly clerks; and Dorotea, the icon maker.

“These four. I need to know all that can be discovered about them. And they must be watched and guarded. Not too closely. But they must be protected, kept safe from harm.”

“What is their significance?” he asked. “They seem of little account.”

At first, they do indeed, but then, seemingly by chance, each candidate ends up at the Star Fortress. Feeling an inexplicable bond with each other, the four are drawn together. There’s a nice bonhomie among the group, and their exchanges are witty and well-drawn. Oblivious Dorotea in particular gets some of the funniest lines. In this encounter with the Cardinal’s second-in-command, Rochefort, Dorotea has been brought to the dreaded Tower of the Star Fortress, where so many have been imprisoned.

“Most people I take to the Star Fortress do more than tremble,” said Rochefort. “Particularly those going to the actual Tower.”

“Oh,” remarked Dorotea. “I suppose they would.”

Nix demonstrates a deft hand with characterization, even in the smaller characters, like Dorotea’s jailer, Mother:

“She was a sharp-faced, ruddy-skinned, scrawny woman of middle years with cruel hands who wore an apron marked with what looked like old bloodstains.”

Although the story borrows much from the spirit of The Three Musketeers, this is not a carbon copy by any stretch. For one thing, book’s gender balance is refreshing. The Cardinal, Rochefort, and other key male characters from Dumas’s story are women here, as is half of the “musketeer” foursome. For another, the detailed world and its magic take up as much of the story as does the swashbuckling.

Liliath’s plan for the four friends unfolds as she covertly sends them three powerful icons and a small treasure via a dead Refuser. When they take the treasure to the Queen and Cardinal, the powers that be assign the foursome to an expedition across the Ystaran border to reclaim more treasure—if only they can survive the plague of beastlings that infests the country.

A rollicking blend of horror story, adventure, and fantasy, Angel Mage rises to a dramatic climax that will satisfy fans of all these genres. And readers of Nix’s Abhorsen series will be delighted to find a new tale that shows off his worldbuilding skills and gift for blending magic with action.