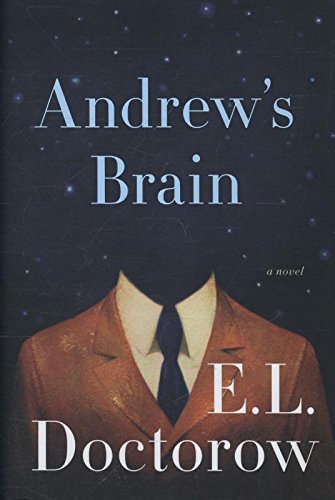 Andrew’s Brain, E. L. Doctorow’s new novel, is a departure from his previous novels but continues an approach to writing he developed in his short stories. At barely 200 pages printed in a larger than usual font Andrew’s Brain seems more like a novella and, like his short stories, features a marginal, struggling narrator and an abrupt and surprising ending.

Doctorow’s novels, including Ragtime and The March, tend to be works of historical fiction with large casts of characters that describe a blend of actual and fictional events and portray what life was like in a particular place and time, whereas Andrew’s Brain is historical only in the sense of being set in a particular time (the first decade of this century).

Here the reader encounters a non-linear, monologue-like stream of consciousness narration alternating between the first and third person that reflects the inward perspective of only one character, Andrew, a neuroscientist, who tells his life story to an apparent psychotherapist he calls Doc who interrupts the narrative with concise pointed questions which Andrew frequently ignores.

Having lost two wives, one to divorce and one to death, and two baby daughters, one to death and one to adoption (to reveal additional losses and details would spoil an enjoyable page-turner) Andrew presents himself as an inadvertent agent of doom to those nearest and dearest to him, yet claims to be remorseless and incapable of feeling guilt. That claim is the first hint that we are dealing with an unreliable narrator, since Andrew is clearly suffering from his many losses. Doc, moreover, sometimes asks Andrew whether elements of his narrative actually happened or whether he dreamed them.

The first two thirds of the book is both bittersweet and disturbing, especially Andrew’s courtship and marriage to Briony, his second wife and former student at a university in Utah, who was less than half his age yet was clearly beneficial to Andrew’s mental health.

In the final third of the book the narrative turns into a quite funny political satire at the expense of our most recent previous president and his closest advisors only to take an even more bizarre and far-fetched turn at the end which suggests a possible allegorical reading and puts the entire story in question in the manner of Moacyr Scliar’s The Centaur in the Garden and Yann Martel’s The Life of Pi.

Despite its title readers will learn very little about brain science other than such quips as “How can I think about my brain when it’s my brain doing the thinking? So is this brain pretending to be me thinking about it?” and “Pretending is the brain’s work. It’s what it does. The brain can even pretend not to be itself.”

Those views of the brain reflect the perspective of a fiction writer more than of a neuroscientist. Doc asks Andrew, “So this is cognitive science?” to which Andrew replies, “Not quite yet. It’s still only suffering.”

Readers, however, will not suffer by reading this well-crafted book whose language is handsome and narrative engaging if unconventional. Andrew’s Brain is recommended to readers who enjoy psychological fiction, stream of consciousness writing, Doctorow’s short stories and his novels who want to see him stretch in a rather different kind of book.

In the decade before his recent retirement Philip Roth wrote several short novels, Israeli writer Amos Oz has turned from novels to short stories in his last two fiction books, and the most recent novels by epic novelists William Gass and Norman Rush have been a fraction of the length of their previous tomes. At 83 Doctorow is two years older than Roth. Here’s hoping he writes more short novels in the years to come.