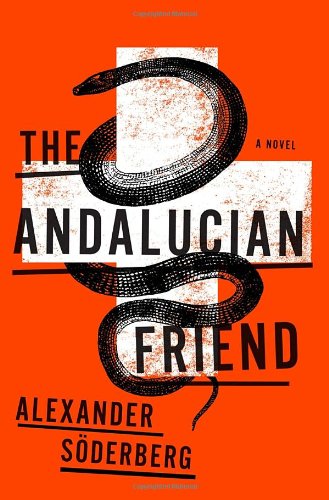 “If you don’t mind a bit of ambiguity, Alexander Soderberg’s The Andalucian Friend is a worthwhile read.”

The Andalucian Friend is a crime thriller, the first in a trilogy set mostly in Sweden. It tells the story of an escalating turf war on a global scale between several organized crime rings.

Sophie Brinkmann, a single mother and nurse living quietly with her son in Stockholm, finds herself caught in the middle of two competing international crime syndicates when the Russians put a hit on rival crime boss, Hector Guzman. He also becomes one of her patients.

When Guzman retaliates, Sophie is dragged into the situation at the moment the Swedish police mark her as a person of interest in their investigation.

Jens Vall is on his own independent mission to facilitate the delivery of dangerous weapons to the Russians when the boat he is on is attacked as it docks in Rotterdam. His cargo is stolen. His pursuit to get it back brings him into the middle of the feuding crime rings—and back into Sophie’s life.

Police bosses permit Gunilla Strandberg to work independently in uncovering the smuggling operations and closing in on the heads of the crime rings. Gunilla uses questionable practices to extract the information and is relentless in her chase and her quest to turn Sophie into an informant.

One of Gunilla’s subordinates, beat cop Lars Vinge, is assigned to the case. Soon Vinge gets his nose bent out of shape regarding the level of responsibility dispensed. Another complication is added when he develops an unhealthy obsession with the main subject of the investigation.

The Andalucian Friend involves a complex main plot, with subplots not always artfully woven in, and a large cast of characters. The story is made more confusing by the blunt and jarring scene changes throughout. This writerly approach is easier to follow once the reader adjusts to the author’s style and gets vested in the characters. The suspense builds and the pace quickens in the later half of the book as a good thriller should.

But it is not always easy in The Andalucian Friend to identify the hero/heroine. And the ending does not necessarily leave the reader with a sense of good triumphing over evil. If you don’t mind a bit of ambiguity, Alexander Soderberg’s
The Andalucian Friend is a worthwhile read.