And After the Fire: A Novel 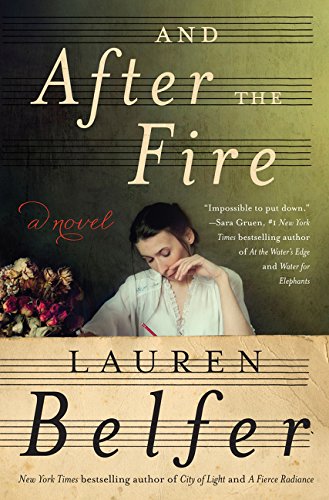 This highly readable novel based on a fictional masterwork by J. S. Bach that finds its way into the hands of a contemporary woman will delight readers of historical fiction, especially if they are music aficionados who like a good love story thrown into the works.

Described as a “what if” novel, the story takes place in both modern times and the late 18th century. Inspired by a class on Johann Sebastian Bach, Belfer wondered “what if I found a work of art stolen during WWII—not a painting, but an unknown choral masterpiece, a cantata by Bach, and what if its content was, by modern standards, prejudicial and inflammatory?” Voilà! A multigenerational saga is born, spanning centuries and continents, and interweaving two women’s lives.

One woman is present-day Susannah, whose charmed life has been disrupted by an act of terrible violence. As she works to regain her equilibrium, her beloved uncle dies, leaving behind a cryptic note that alludes to his war experiences as an Allied soldier in Germany. As it turns out, he has had in his possession a work by Bach that is virulently anti-Semitic. Sarah, being curious, and Jewish, feels compelled to trace the story of the work found in a piano bench in Weimar. She is also smart so she understands the significance of what her uncle has secreted for so many years.

The other woman is Sara Itzig Levy, daughter of the King of Prussia’s Jewish banker and a gifted harpsichordist who studied with Wilhelm Friedermann Bach, the son of J. S. Bach. On his deathbed he bequeaths the score to her as a wedding gift. Thus begins the interspersed chapters in the book, which like Geraldine Brooks’ The People of the Book, trace the various owners of the cantata on its journey to Susannah’s hands.

Along the way, real 18th century people like Beethoven, the musical Mendelssohns, and the Bach family appear, revealing what life was like for the elite in anti-Semitic Berlin during the Enlightenment and the Romantic era. While many characters in the book are fictional, Sarah Levy is not. She was the great aunt of Felix Mendelssohn and his sister Fanny, also a composer. Unlike many Jews at that time, she did not convert to Christianity and became a benefactor of the Berlin Jewish orphanage, which closed in 1942 when the remaining children were deported to Auschwitz. Facts like these make the book even more compelling.

So does Susannah’s search for the history and significance of her legacy, as well as her drive to know more about her own family’s European experience during the war. In the course of her searching, she meets Dan and Scott, two single men, music historians both, who vie for her attention while helping her get to the root of the piece that has come into her possession, a Bach masterpiece that vilifies Jews while being worth millions of dollars.

Belfer’s book is well researched and well-paced. As the story moves back and forth between Sara’s and Susannah’s times and experiences, the suspense of the story intensifies. New characters come into play influencing a satisfying denouement.

Personal experiences the author had while in Germany researching the book also come into play. For example, she found herself the subject of intense stares that she couldn’t explain in Weimar. Nor could she understand why the concierge at her hotel refused to recognize the existence of Buchenwald. Both of these realities found their way into the novel and added an element of verisimilitude.

The title of the book derives from words found in Felix Mendelssohn’s oratorio Elijah, quoted in turn from the Old Testament, the author explains.  “The phrase,” she says, “seemed to bring together the multiple strands of the novel,” which took five years and four trips to Germany to complete. Unfolding across hundreds of years on two continents, with a broad range of fictional and real characters, a work like this one requires a masterful storyteller. To her credit, author Lauren Belfer leaves us wondering about the happily-ever-after part.

Belfer proves herself to be that skilled weaver of tales in this intellectual thriller that links the lives of two admirable women who have been fortunate enough to have had extraordinary and consequential experiences.