An Anatomy of Addiction: Sigmund Freud, William Halsted, and the Miracle Drug, Cocaine 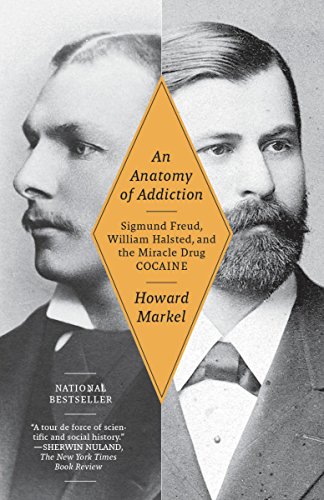 “His straightforward and realistic description of the medical advances made by both men reveals both their greatness and their shortcomings. An Anatomy of Addiction is a fascinating revelation of conditions prevailing in hospitals and medical circles in the late 19th and early 20th centuries.”

Seeing the devastation caused by the drug cocaine, which has led to the enslavement and death of so many, it is hard to think that its virtues as a miracle drug were once extolled by the medical profession.

However, such is the case, as the renowned medical historian, Dr. Howard Markel, reveals in An Anatomy of Addiction: Sigmund Freud, William Halsted, and the Miracle Drug Cocaine, which tells of how both the innovative New York surgeon William Halsted and the father of psychoanalysis, Sigmund Freud, independently discovered at least some of the benefits of cocaine for therapeutic use, including as a means of overcoming addiction to morphine and as a treatment for depression.

That neither of the medical experts saw the dire consequences of becoming addicted to such a drug is patently clear, in that both Halsted and Freud not only experimented with using the drugs on themselves, but also on their own students, in the case of Halsted, and on members of their own family, in the case of Freud, who even prescribed it for use by his “beloved little woman,” Martha Bernays.

Dr. Markel’s lively account of the life of Halsted and Freud traces the histories of both men in relation not only to their medical practices, but also to their home life, showing how their addiction to cocaine impacted their performance both at home and abroad. His straightforward and realistic description of the medical advances made by both men reveals both their greatness and their shortcomings. For instance, he does not gloss over the fact that Freud, despite writing a treatise on cocaine, entitled Über Coca, in which he described his “most gorgeous excitement” about its efficacy, failed to make more than passing mention of its anesthetic qualities.

An Anatomy of Addiction is a fascinating revelation of conditions prevailing in hospitals and medical circles in the late 19th and early 20th centuries. Dr. Markel is not only an erudite scholar, but is also able to convey the most complex of concepts in the simplest of terms, making this book a valuable addition not only to college and university libraries, but also to school libraries and home collections.

For anyone who wishes to learn more about the evolution and effects of the drug cocaine, the work should prove an enlightening and informative read. Biographers and historians should take note as well of how fascinating a comparative study of two like-minded individuals can be. Despite Halsted and Freud never apparently meeting, their approach to the use of cocaine had some notable similarities—of interest to anyone interested in the health sciences.