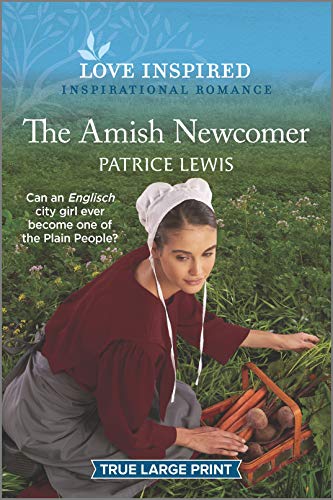 Leah Porte works diligently for years to accomplish the enviable position as a television journalist reporting the down-and-gritty news in Los Angeles. Though having no social life, she is fulfilled while concentrating on her career. Until . . . .

While on a scene, Leah is brutally attacked and left fighting for her life, causing the Witness Protection Program to relocate her to the small Amish community of Pikeville, where she is least likely to be discovered by the thugs after her.

It's difficult for a professional city woman to get accustomed to Amish ways, learning to live a sustainable life without the comforts of electricity, running water, cars, phones, and even computers. Taken under the wing by the Byler's, Leah is graciously welcome, now dressing in Amish attire, and treated like kin. Neighbors are told she is a distant relative recovering from an accident, for in her present situation, the less known about her the better, not only for her safety but for that of the Byler's, too.

As Leah enters the Byler household, consisting of pregnant mother, Edith, father, Ivan, and their three boys and three girls, Leah feels overwhelmed. An only child whose parents divorced when she was young, she's not used to a large family, though she is captivated by the devotion and compatibility they share, as well as the respect of the children.

What will happen when she can leave and get back into the world? Because of the disfigurement she received to her face, she'll never be able to be behind a TV camera again, and this is something she's worked for her whole life.

Unused to manual labor, Leah learns the domestic chores inherent with everyday living: washing clothes by hand, cooking on a wood stove, preparing meals from home-grown preserved food, as well as other household duties the typical "Englisher" completes easily by using appliances. Leah realizes she loves working in the garden, weeding, and harvesting fruits, and vegetables, but most of all—doing chores with others, where there is a camaraderie among everyone. A new experience for Leah, she is surprised she enjoys every second of the back-breaking work, and the silent evenings while Ivan reads the Bible as everyone listens attentively. Leah finds something she never experienced before: the love of community and a newfound family.

Leah is drawn to Rachel, the Byler's daughter, who was born with a physical disability. Wise beyond her years, she gives Leah insight into her faith and the principles they all live by. Never having any formal religious training, Leah is amazed and impressed by their dependence on their Lord.

Rachel describes her experience during her "rumspringa”:

"'On my rumspringa, I missed having friends around all the time. It seems a lot of Englisch people are lonely. I know I would be, if I didn't have the church community around me all the time.'

"The words were simply spoken, but they made Leah blink hard for a few moments. Short or not, Rachel knew where she belonged. She had a place in this community. She knew what her role was in life.

"Where do I belong? Leah had a moment of profound loneliness. She belonged nowhere. She no longer knew what her role was in life. She was rootless, without the community or even faith that sustained these daughters of the Byler family.

"What would it be like to be so unquestionably accepted. Leah had clawed her way to the top for so long that the thought of sinking quietly into a society that accepted its members with love and loyalty was intriguing."

Leah discloses the truth to Rachel of what brought her to the Byler's:

"'I was filming a story on gang violence in L.A. It was the night of January first, New Year's Day, a cold night out on the streets. I saw two gang members kill a woman and her child. They just knifed them down in cold blood. . . .’

"'They didn't see me or my cameraman, and we filmed the whole thing.' Leah's voice trembled. 'I'll never forget it. It was pure accident they were killed on camera, and it happened so fast neither of us could have stopped it. But they saw us. Suddenly we were running for our lives down a dark alley. They caught up with us when I tripped and fell. . . .’

"'One . . . one of them started slashing my face. I thought he was going to slit my throat, but my cameraman, Ted, kicked him in the head, so he was knocked out. Ted saved my life that night. He decked the other guy, dragged me to my feet, and we made it back to the news van and got out of there. He took me straight to the hospital, where they had to do some reconstruction work on me, but it was clear from that moment my career in front of the camera was over. . . . ‘

"'. . . My station aired the footage of the murders, and from then on, I've been hunted. They had to post a guard at my hospital room door after some people tried to get in. I wasn't safe at my apartment. It took no time for my address to become known. They want me dead. Finally, the authorities put me in witness protection, which is how I ended up here, through the kindness of your parents."

Leah meets Isaac Sommer, a neighbor who helps Ivan with his furniture-making business. Like Leah, he is also in his late 20s and unmarried unlike most of his peers. During his rumspringa to the "English" world, he attended school, but realized he missed his old lifestyle, so he returned. In addition to working with Ivan, Isaac creates leather articles and cares for his widowed mother. Now, with permission from the Bishop he produces a magazine not only for the Amish but for those wanting to live off the grid and get back to nature.

Isaac is drawn to Leah. They share "Englisch" living, so she understands things others in his group cannot. Wanting nothing more than to marry and have a family, many of his contemporaries are already married, but the younger women are not interested in him.

Isaac requests Leah's assistance with his publication. Well versed in writing and computers, she would be a great help to him. Though hesitant, she starts jotting down facts about her new lifestyle from her perspective, realizing she can offer something new to promote the magazine's circulation, particularly outside the "Plain" community.

As time passes, Leah becomes attached to the locals, especially Isaac. She realizes:

"She was beginning to see something of the strength the Amish forged through their strong ties with each other. They didn't compete; they cooperated. They didn't tear down; they build up."

Leah thinks this is a wonderful way to live, but she is not one of them. Though Isaac shows interest in her, he is baptized and will not leave his faith. Could they possibly have a future? Could she become a member of the church? Leah considers this and visits the Bishop to discuss her thoughts and with him. He tells her this:

"One of the problems we experience is outsiders tend to romanticize our way of life. We're seen as throwbacks to a happier time when people lived in harmony with each other, with Gott, with the earth. Those who seek us based on those terms don't last because Gott isn't the center of their lives. But Gott is the center of our lives. One of the reasons we do adult baptism is because it's critical our members understand the seriousness of their commitment, something children can't do. It's far better not to make a vow than to make a vow and later break it. That's why we take both baptism and marriage seriously. There's no going back."

This last paragraph says a lot about these people. Their selflessness, compassion, and care of others make this appear to be an ideal way of life. But can an “Englisch” American renounce modern convenience and live this way? Regardless that this is seemingly a perfect world, they too must face obstacles and hardships as with any group. The heartwarming aspect of this novel is the unconditional love, acceptance, and peace shown—a blessing in our current turbulent world.