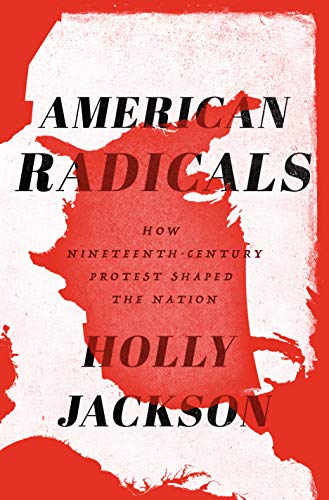 “The radicals in Holly Jackson’s informative book speak not only with truth and passion but with a vision of a different, better America.”

“Capitalism has expanded beyond reckoning, and ongoing inequalities across race, gender, and socioeconomic class are still measurably immiserating America lives,” notes Holly Jackson near the end of her impressive—and impassioned!—study, American Radicals.  She warns that the profound changes in the U.S. since the 19th century often lead people to forget or undervalue the contribution of earlier radicals. For some, “They are history’s losers.”

However, for many others, especially as an ever-growing number of Americans upset by the actions of the current president, the voices of 19th century radicals speak not only with truth and passion but with a vision of a different, better America.

Foremost, these radicals helped reshape the nation’s social order, most notably in ending state-sanctioned racial inequality through a bloody civil war. They championed and—after much struggle—succeeded in securing voting rights for African American men and, a half-century later, all women.

Their campaign for “free love” influenced not only the rise of feminism but the acceptance of divorce, the criminalization of marital rape, and adoption of birth control. Their communitarian beliefs led to not only the establishment of innumerable utopian communities but to manufacturing and retail co-ops as well as changes in American eating habits (e.g., Graham crackers, cornflakes).

Jackson, a history professor at the University of Massachusetts, Boston, brings a well-studied understanding to her new book. Her analysis extends the work she did in her earlier book, American Blood: The Ends of the Family in American Literature, 1850–1900.

The author segments the 19th century into four sections—1817–1840, 1836–1858, 1848–1865, and 1865–1877 – that mark out key phases of social struggle. She traces a series of core issues that that defined the century, including the role of women in society, the “free love” and utopian desire, the fate of African Americans and class struggle fueled by industrialization. More revealing, she shows how the issues evolved as the nation changed and this evolution defined the policies and practices of the many radicals profiled.

Most importantly, Jackson has dug deep into the historical record to uncover the critical roles played by innumerable radicals whom history has for the most part forgotten. On nearly every page she introduces individual radicals who played an invaluable part in one or more of the ongoing social struggles of the era. American Radicals is an ambitious and invaluable undertaking that makes an original contribution in its appreciation of the roles played by traditionally anonymous individuals in the making of history.

However, like all historical studies, somethings are missing. First, Walt Whitman does not appear. He is American’s great flâneur, a stroller, an urban explorer, a connoisseur of city street life. What Paris was for Charles Baudelaire, Brooklyn and New York—which were two separate cities until 1898—were for Whitman. He invented not only the modern American poetic voice but the postmodern sensual sensibility. As he wrote in “Your Felons on Trial in Courts” in Leaves of Grass:

“Lust and wickedness are acceptable to me,

I walk with delinquents with passionate love.

And henceforth I will not deny them—for how can I deny myself.”

Jackson offers an excellent consideration of Francis Wright yet fails to mention that Whitman attended her lectures and, looking back at his youth, he fondly recalled her: “I never felt so glowingly toward any other woman. . . . She possessed herself of me body and soul.”

Equally puzzling, while carefully considering Ezra Heywood, a radical proponent and publicist for social and economic reform, the author overlooks how he became embroiled in a legal controversy surrounding the 1881 publication of Leaves of Grass. Anthony Comstock, the 19th century leading anti-obscenity campaigner, advised Heywood to not publish Leaves of Grass, yet Heywood distributing through the mail two of the objectionable poems, "To a Common Prostitute" and "A Woman Waits for Me." He was arrested, convicted and went to jail to defend free speech.

Second, Jackson doesn’t bring her compelling analysis up to the current era, especially the tumultuous 1960s. The liberator spirit that drove many 19th century radicals was recalled—in word and deed—by many ’60s radicals who promoted peace, love, civil rights and the joys of LDS, marijuana, rock-and-roll and sex.

On January 14, 1967, San Francisco’s Golden Gate Park celebrated the Be-In and 30,000 partygoers showed up. Two months later, on March 26, Easter Sunday, Be-Ins were held in New York and Los Angeles, setting the stage for the “Summer of Love.”

In June, 60,000 cheering fans attended the Monterey Pop Festival that featured Jimi Hendrix, Otis Redding, Jefferson Airplane, the Mama and the Papas, and Big Brother and the Holding Company featuring by Janis Joplin. The “summer of love” culminated two years later at Woodstock (NY) in August 1969 but fizzled out in December at Altamont (CA).

The ’60s radical challenged traditional American values. They expressed the social, cultural, and political dimensions of a deepening struggle that included an increasingly more militant civil-right movement, represented by the Black Panther Party; spreading anti-Vietnam War protests, including growing dissatisfaction among soldiers; a greater expectation of sexual freedom, fostered by the introduction of the birth-control pill; alternative life styles encouraged innumerable communes; an increasingly militant gay rights movements culminated in the 1969 Stonewall riot; and the rise of second-wave feminists, following the right’s blocking the adoption of the ERA and the Roe v. Wade decision (1973), challenged patriarchy. This new radical spirit was forged in the disruption of the 1968 Chicago Democratic convention that led to Richard Nixon’s election.

The generation of the ’60s took up the campaigns initiated by the American radicals of the 19th century. Now as the 21st century takes shape one can ask how the older struggles that forged early modern America will reemerge in our postmodern world?