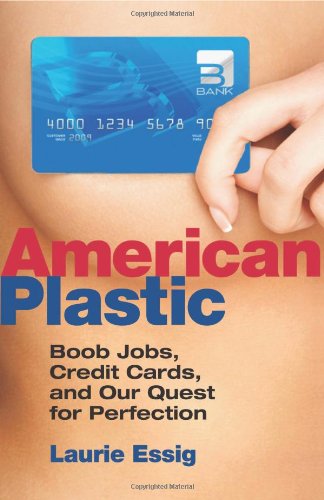 As we end the year, serious business readers (which outnumber frivolous scanners two to one, according to my statistics) have crumpled face first into a long winter’s nap.

Who can blame them? Victims of the publishing industry’s full-employment act for any journalist and economist with a pulse—and the 753 books about financial perdition disgorged in 2010 (you can look it up on Amazon)—these loyal bibliophiles are hung over, bleary-eyed, and rubber-legged.

Ah, but for those still vertical and ready for a break from fiscal Armageddon, we have a near-New Year’s treat: an old-fashioned, holiday-season screed against our national bane, breast implants—Laurie Essig’s American Plastic: Boob Jobs, Credit Cards and Our Quest for Perfection.

Essig, who teaches at Middlebury College, is the ghost of desolation; she views cosmetic surgery with such despair that on page one she throws up her hands in surrender. “The roots of our obsession with cosmetic surgery run so deep into the very essence of what it means to be an American, that there is no escape.”

Despite her raising this early white flag, the literary equivalent of the Italian Army at full strength, Essig takes us into her world, part Invasion of the Body Snatchers, part Frank Norris, with a soupçon of academic outrage thrown in.

Our obsession with boob jobs and tummy tucks is a direct result of globalization, she avers. “It is part of the radical insecurity we now have a work and at home . . . a new form of eugenics, a reinvigorated obsession with the body as an indicator of our core character as well as a variety of technological innovation.

“We might prefer not to go under the knife,” she continues, “but what choice do we have? To be ugly.”

At this point, the reader may be frantically reaching for some holiday cheer in the liquor cabinet, but no such luck: Professor Essig is on a roll even as she wheels her subject up Sisyphus Hill.

This is not to take away from her considerable powers: She is a prodigious researcher; over the course of American Plastic, she presents a smorgasbord of statistics, clippings, and anecdotes—all peppered with tales of her not-so-undercover research at plastic surgery conventions.

If anything, Essig embarks on a hilarious journey, although she may not realize it. Ever the flummoxed observer, she becomes a modern-day Candide surrounded by the Dr. Panglosses of scalpel and needle, a feminist Huck Finn rafting on the mighty Botox River.

Her courage should not be scoffed at: During one of her field expeditions, while trying to pry information out of one nip-and-tuck M.D., she is subjected to a friendly but relentless litany of suggested corrections that could be made to her face and body.

So what do we learn? Well, it’s hard to exactly say. Certainly not what the title promises—Essig makes only a half-hearted try at finding any real linkage between our credit and cosmetic habits.

Instead, like Xerxes punishing the ocean, she raises her fists at the market and rails about capitalism’s vagaries that infect women and cause them to carve stuff and smooth their various organs.

“We must join together in our reality-check groups to counter the dementia of American plastic and the American dream. We cannot keep consuming more and more on plastic money. We cannot spend all our time and resources on the impossible project of perfection.”

“But, Professor,” some wag might reply, “there were roughly 12 million cosmetic patients in the U.S. in 2009, according to the American Society of Plastic Surgeons, and 246 million adults over the age of 18 according to the Census. That means all of five percent of us have scraped and buffed ourselves. The $12 billion spent on that is eight-tenths of one percent of the nation’s 2009 $14.12 trillion gross domestic product. So is cosmetic surgery really a Manichean struggle in the larger scheme of things? What do you say to that, Professor Essig?”

To be fair, Essig is up against heavy odds, snared within the web of human invention. After all, it’s not what we want from technology, but what technology wants from us. Someone, no doubt, will eventually whisper to her that aesthetic surgery is kid’s play compared to what awaits us in the genome revolution, when the choices involved in birth, life, and death may comprise as many daily specials as an after-Christmas sale.

Yet, if anything, one wishes Essig could have shaken her sociological shackles and helped us understand how much of our cosmetic obsession is hardwired into our psyches. Standards of beauty vary in each cultural watershed and location. Right now, we Americans happen to be in the Barbie phase of pulchritude, but 125 years ago, heft and the hourglass figure were the rage; Lilly Langtry was the Victorian Age’s Madonna.

For the working stiff, the subject is overwhelming. It requires the help of the ethicist, poet, and even quantum mechanic. We think we know what beauty is, but it may be beyond us—the dark pool of matter, shaped only by the spectrum of our inner lights, never real, wispy as last night’s dream.