American Inheritance: Liberty and Slavery in the Birth of a Nation, 1765–1795 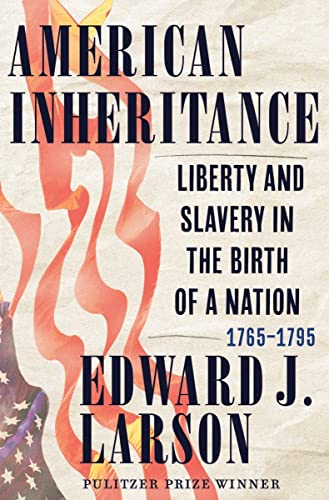 “the narrative has clear writing and solid scholarship that does not promote an agenda, leaving the reader to imagine broader implications and slavery’s legacy.”

Proponents of modern cancel culture race and slavery conspiracy theories are often accused of making what attorneys call assumptions made from facts “not in evidence” as if proven historical reality. To people who want to believe an agenda that such claims have no basis in truth does not matter.

In American Inheritance, historian Edward J. Larson explores how “the Revolutionary era changed the American understanding of liberty and slavery.” The narrative has clear writing and solid scholarship that does not promote an agenda, leaving the reader to imagine broader implications and slavery’s legacy. Scholars can find minor points to quibble over but, overall, it comes across as an honest effort.

The author jumps into the facts and what they mean. From the beginning, America “gave a sense of liberty (or at least empowerment) to European Americans but slavery for Native Americans” and consequently for Africans. “Over two million Africans had been shipped to the Americas for sale by 1700.”

Even John Locke, the great champion for personal liberty protected by self-governance, not only supported human bondage in America but justified it in racist terms and profited from it. In 1619, Virginia began the perpetual slavery of Africans at the same time that its white male citizens obtained the right to decide their own laws.

The rhetoric of the coming American Revolution defined white American rights in terms of Locke’s words about enslavement and liberty, arguments are also relevant to the lives of the average European of the Old World. Yet, “white Americans saw little connection between freedom for themselves and slavery for Blacks.” Race became the justification for slavery rather than enslavement as the reason for racism.

This resistance to British policies using words like “enslavement,” as Larson explains, went back to at least the denouncements of the Stamp Act in the 1760s. These terms became the catchwords in the American Revolution, continuing with the First Continental Congress in 1774. “The rhetoric of liberty served many purposes.”

The roots of this contradiction came from economics. Europeans intermarried with their multiple cultures in America and, to a degree with Africans and Native Americans, to make the New World a mixing pot of blood from its beginnings, however fundamentally racist the white society remained. In New England, an Abolitionist movement began among the Black community with the American Revolution.

Larson begins with the Boston Massacre of 1770 and the treatment at the time of the memory of Crispus Attucks, an African and Native American, killed in that pre-war protest. The Revolution came at a time when more than tea and taxes were issues. The famous Somerset case threatened what remained of slavery in Great Britain and, by that legal precedent, the legality of human bondage in America.

Black blood was spilled for the American cause at Concord, Bunker Hill, and for the rest of the war, encouraging criticism on all sides of slavery as incompatible with a war for liberty. Vermont became the first of the future states of the United States to end all enslavement of its residents. The war finally persuaded Benjamin Franklin “that slavery itself—not just the slave trade—should end.”

George Washington and his officers initially rejected Black soldiers although British colonial Governor John Murray, Lord Dunmore, famously offered emancipation to the enslaved who joined the king’s cause. Lord Dunmore’s action proved a boon in drawing support for the Revolution from Americans opposed to arming Black Americans and/or fearing a threat to slavery.

The people fleeing to the British included slaves from the plantations of George Washington. For America as a whole, they would eventually number in the thousands. Conversely, famed Black poet Phillis Wheatley, “an exception to the rule of African anonymity in colonial America,” wrote the praises of Washington and the Revolution.

George Washington had to accept Black soldiers or he would have no army. Georgia and South Carolina never accepted arming slaves or meeting quotas for soldiers with offers of emancipation despite the famous efforts of Colonel John Laurens of South Carolina, son of the Second President of the Continental Congress Henry Laurens, however. The Black patriots served in the most racially segregated American army until the mid-20th century.

States individually decided their respective futures immediately after the war. The 1790 federal census only showed Massachusetts with no enslaved persons and only slowly did other states end that enforced labor. Even before the passage of the Constitution, arguments raged over human bondage and ending the trade of importing enforced laborers from Africa and a national fugitive slave law.

South Carolina and some other states tightened control of all African Americans residents.  Overall, “the American Revolution and the new American nation became less about liberty or slavery but about liberty and slavery.” Another book could carry that thesis on to the revolution of the Jacksonian Democracy of the 1830s and the American Civil War.

American Inheritance is a quest to understand how the American Revolution began the questioning of that conflict. It has a solid narrative highlighted with vignettes of people such as Olaudah Equiiano and and Benjamin Bannaker. Larson does not kick ghosts but rather he seeks to understand and explain this past.

The text of American Inheritance is relatively short considering the depth to which the author takes the subject. It has annotations and illustrations.