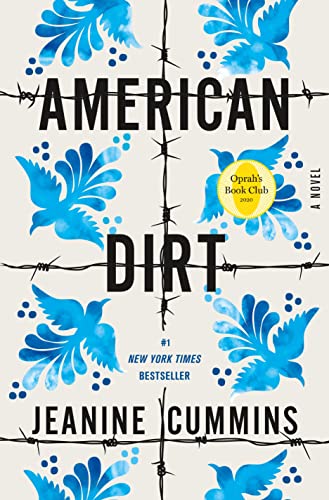 “As literature, American Dirt is modern realism at its finest: a tale of moral challenge in the spirit Theodore Dreiser wrapped inside a big-hearted social epic like The Grapes of Wrath.”

Lydia Quixano Perez leads a charmed middle-class life in the Mexican resort city of Acapulco. She has married her devoted college boyfriend, Sebastián, a journalist of rare principle and courage in a community beset with the corroding influence of drug cartels. She operates a small bookshop, affording her an opportunity to surround herself with the literature that she loves. But her greatest joy is her eight-year-old son, Luca, a curious child with an uncanny gift for geographical trivia. Lydia’s days, in their broadest architecture, resembled those of millions of comfortable American parents on both sides of the border between her nation and el norte. And then, in a sudden hail of bullets, nearly everything she treasures in her world is gone.

So begins Jeanine Cummins’s mesmeric and unsettling tour de force, American Dirt, a novel at once deeply personal and intensely political. Sebastián has written an article revealing the identity of a narcoterrorist, La Lechuza (“The Owl”), chief of a violent drug syndicate known as Los Jardineros.

In response, this sadistic drug lord sends gunman to the quinceanera of Lydia’s niece, gunning down 16 members of her family including Sebastián and her mother. The killers have left behind a cardboard sign on Sebastián chest that reads: “My whole family is dead because of me.” Only Lydia and Lucas escape. Hunted by a ruthless enemy and cleaved from their prior lives, mother and son find themselves transformed into migrantes, enduring a desperate game of cat-and-mouse as they follow the well-worth path of other countless Latin American refugees toward the relative safety of the United States.

Cummins emphasizes her heroine’s precipitous descent. (One is reminded of Pasternak’s haunting breach in Doctor Zhivago, “And then suddenly all that was gone. They were poor.”) She writes: “Lydia had been aware of the migrant caravans coming from Guatemala and Honduras in the way comfortable people living stable lives are peripherally aware of destitution. . . . Mothers pushing strollers thousands of miles, small children walking holes into the bottoms of their pink Crocs, hundreds of families banding together for safety.” Without warning, she finds herself among them. The reality of their suffering—a maelstrom of destitution and mutilation and sexual violence—far eclipses the brutality of her middle-class imagination.

Lydia’s and Luca’s journey takes them from Acapulco, long fallen from its days as a Love Boat stopover, to La Bestia, the aptly branded “tren de la muerte” or “death train" that carries freight and human cargo up the spine of a broken Mexico. They are fortunate to befriend two teenage girls from Honduras, Soledad and Rebeca, who teach them tricks for boarding the railroad cars without losing limbs (all-too-frequent occurrences) or being sucked to the tracks and crushed to death.

Soledad, pregnant after being raped by a petty gang leader in San Pedro Sula, is a stunning 15-year-old beauty, and female beauty is not a practical asset in the depraved underworld of forced migration; rather, her looks prove a magnet for the most base and brutal sorts of attention. The solidarity between these four traumatized victims stands as a testament to human capacity for connection. Cummins offers this as a take on “Newton’s third law”: “[F]or every wickedness, there is an equal and opposite possibility of redemption.”

Cummins is no stranger to darkness. Her bestselling memoir, A Rip in Heaven, recounts an episode in which her brother and two female cousins were attacked on a Mississippi River bridge, the girls ultimately raped and drowned. But as in A Rip in Heaven, in which she also explores the lives of the perpetrators—arguably too generously—Cummins digs as much into the why underlying human cruelty as into the how. La Lechuza, whose real name is Javier Crespo Fuentes, reveals himself to be a thwarted poet who references García Márquez, his casual violence a secret guarded from the daughter he adores. The novel is populated with saints and villains, but also many ambiguous characters operating within the vast swath of gray in between.

As literature, American Dirt is modern realism at its finest: a tale of moral challenge in the spirit Theodore Dreiser wrapped inside a big-hearted social epic like The Grapes of Wrath. Cummins, whose author’s note reveals that her husband was once an undocumented immigrant, has clearly done extensive research to capture the wide swath of Mexican experience that she explores with subtlety and persuasive authenticity. For instance, when a coyote warns Lydia’s band not to reveal which of them is the trafficker if they are all captured because then the cartel skimming the coyote’s profits will revenge itself upon the snitch, one can be certain that we are in the hands of an author who has mastered the intricate nuances of the world that she depicts.

But American Dirt is also an indictment. And as with many of the strongest of literary indictments, its power comes from its specificity. Like Frederick Douglass being tortured by the lash of Mr. Covey or Anne Frank convincing herself that “people are truly good at heart” before her deportation to Bergen-Belsen, the ghastly suffering of Lydia and Soledad—while technically fictional—proves fore more agonizing than any expansive general commentary on the abuse of migrants could ever be.

One does not doubt that this is fiction only in name, that others have suffered fates similar or far worse on their journeys northward to the barbed wire and electronic infrared eyes and hope-parching desert of the border. Moreover, the horrors remain ongoing. To the degree that American Dirt is a violent book—and this violence is often psychological rather than graphic—the novel truly earns its bloodshed, implicitly making the case that such violent epic is needed at present.

Even in January, it is already clear that this novel will be the work of fiction that literary-minded readers discuss and critics champion through the course of the coming year. American Dirt is going to be the defining book of 2020, the volume that bring the atrocities of our failed immigration policy into the book clubs and bookshops and kitchens of American men and women just like Lydia. Cumming and her writing will most certainly be nominated for major awards and may even win. These prizes will certainly be deserved. But for Lydia’s sake, and Luca’s, and Soledad’s, and the many thousands suffering like them, what matters most about the book is that readers remember why it had to be written. And that, for now, nothing has changed.