American Demon: Eliot Ness and the Hunt for America's Jack the Ripper 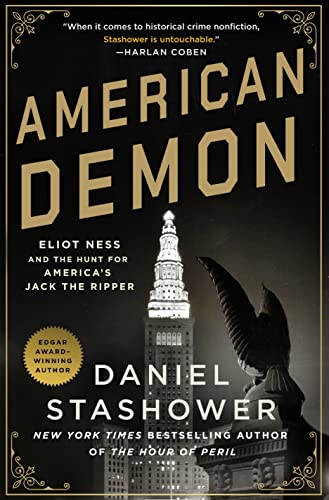 “Nicely crafted, the book will appeal to hard-core Ness fans and true-crime freaks.”

Some readers can never get enough of Eliot Ness (1903–57), the celebrated crime fighter who helped bring down Chicago gangster Al Capone. Enshrined by American myth-making—notably in the immensely popular TV series “The Untouchables”—Ness’s Prohibition-era success was followed in the 1930s by his abysmal failure to capture a notorious serial killer in Cleveland, known as the “Mad Butcher of Kingsbury Run,” who beheaded and dismembered a dozen vagrants.

In Eliot Ness and the Hunt for America’s Jack the Ripper, bestselling historian Stashower offers a clear-eyed view of Ness, who was 31 years old when he assumed the post of director of public safety in racketeer-plagued Cleveland.

Deemed an irreproachable “Boy Scout,” he was a blue-eyed, baby-faced son of Norwegian immigrants who often said “Gosh!” and “Gee!”

Back in Chicago, he had directed an eight-member liquor squad. Now, in Cleveland, he was in charge of the police, fire, and other departments, with a total of more than 2,500 employees.

For Ness, it was an unfamiliar situation. He confronted politics, bureaucracy, and broader concerns than he faced in his earlier hands-on work as a Prohibition agent. Nonetheless, ever the enemy of corruption, he succeeded in instituting major reforms in the Cleveland police department, most notably cracking down on dishonest precinct captains.

When children playing in the woods began discovering heads and body parts in the city’s disreputable Kingsbury Run section, Ness was busy with police reform. Not a traditional cop himself, he took personal charge of efforts to identify and stop the seemingly maniacal killer after the mayor asked him to do so.

The string of gruesome murders challenged even his best detectives. Few victims were identified. There was no evidence at the murder scenes. The killings were apparently random.

By the time a sixth headless victim was found, the Cleveland News reported the detectives “baffled,” with few clues available to them. Their only hope was that “the fiend might some time be interrupted in one of his missions of death.”

Using primitive forensic tools, detectives searched existing records for suspects with “sadistic tendencies.” They checked in with hospitals and mental institutions in Ohio and nine other states. They used volunteers to scour fields and swamps. And they sent uniformed officers into surrounding neighborhoods, “talking to housewives, boys, anybody who might have the slightest shred of information.”

It was all fruitless.

Stashower offers a meticulous account of the unproductive investigation, leaving no lead or body part unnoted. He draws extensively from Cleveland newspapers of the era, which covered the murders in graphic detail. Major dailies engaged in circulation wars, trying to outdo one another with sensational stories.

Determined to catch the killer, Ness created a “privately funded, independent squad of investigators” devoted solely to finding the butcher. It was a familiar backroom approach that had worked successfully for him in the past. His secret, handpicked team of eight men, operating without official restrictions, turned to criminal contacts in the hope of gaining information unavailable to official lawmen.

But creating the secret team had the effect of subverting official investigators, who knew nothing about the action, writes the author. Stashower also faults Ness for ordering the burning of the shantytowns in Kingsbury Run, ostensibly to deprive the butcher of future prey. The razing of homes revealed a hard-nosed side of the crime fighter, generally regarded as a softy. “Now, speaking to the press, he seemed coldly indifferent to the plight of the city’s transients.”

No one was ever arrested for the baffling killings. But Ness was convinced that the culprit was Dr. Francis E. Sweeney, a World War I veteran whose medical unit conducted many amputations. An alcoholic, Sweeney was interrogated as a suspect by Ness himself. Despite circumstantial evidence, Ness felt prosecution of the doctor would have been unsuccessful. Sweeney, it turned out, was a cousin of one of Ness’s political opponents, Congressman Martin L. Sweeney.

Committing himself to a mental hospital, Dr. Sweeney sent harassing postcards to Ness and his family for many years. He died in 1964.

“The Kingsbury Run murders have shadowed [Ness’] legacy as the case he couldn’t crack, the mass murderer he failed to bring to justice,” writes Stashower.

Largely sympathetic to Ness, the author nonetheless details his ensuing years of decline, marked by three divorces, heavy drinking, and a penchant for screwing “everything in a skirt,” as one wife put it.

Although Stashower is an accomplished storyteller, some readers may feel let down when the suspense of this bodies-galore account comes crashing to an unsatisfying end. We are left without an identified killer and with Ness’s storied career and personal life in tatters.

Nicely crafted, the book will appeal to hard-core Ness fans and true-crime freaks.