Am I Sane Yet? An Insider's Look at Mental Illness 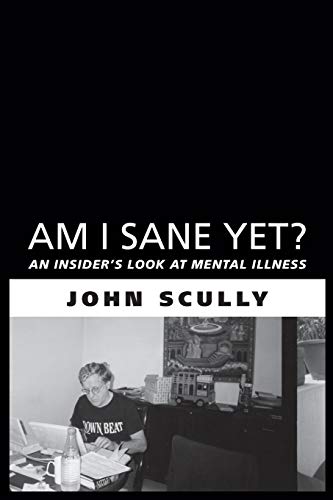 John Scully’s Am I Sane Yet? An Insider’s Look at Mental Illness should be subtitled instead A Memoir About Depression. Why? Because aside from statistics, we do not learn much about mental illness in general or as it may relate to anyone else suffering from the many different categories of mental illnesses—except perhaps as a text for personal comparison regarding depression.

What we do get is an almost blow by blow personal history of Mr. Scully’s own battle with severe clinical depression and its concomitant symptoms. “If there’s one good thing I can report about depression, it is that it’s an egalitarian employer. No one is immune—not the famous, the glamorous, the tawdry, or even the Icarus-nose-thumbers like me. And that applies to its ever-lurking cousins such as schizophrenia, OCD, PTSD, and other more arcane and complex forms of mentai illness.”

All well and good. But while he goes on to define PTSD and list various famous people who have been victims of depression’s insidious, creeping, lingering symptoms, never do we get the sort of comprehensive look at any other mental illness. Hence, this book is not about mental illness at all; it is about depression, Mr. Scully’s depression.

Most of the book focuses on Mr. Scully’s career trajectory up the ranks of the BBC newsroom, to Canada’s Global in Toronto, to Canadian television’s CTV W-5, to CBC Newsmagazine, to CBC’s The Journal, with stints in New Zealand and other venues, reporting news from all over the world. Much of this work involved traveling for long stints of time, often nine months away from home, an unstable lifestyle filled with danger and uncertainty. Once, in El Salvador, he unwittingly finds himself, along with his camera crew, facing a firing squad. From these and other experiences, he develops PTSD with a twist: Instead of avoiding situations fraught with danger like this one, he seeks them out.

Bosnia to Uganda, El Salvador to Ho Chi Minh City, Mr. Scully traveled and reported the news and continued to find himself promoted, sometimes laterally to different companies, but promoted nonetheless. Of course, all the traveling and moving, not to mention the constant bouts of debilitating depression, wreak havoc on his family relationships and his family life, which survive only because his long-suffering wife appears to be a saint—either that or a masochist.

The overall effect of this book leaves those interested in the subject of mental illness and its specifics as relates to the general population feeling a bit robbed. Not to slam our beloved neighbor to the north, but every statistic in this book—purportedly the American edition—refers to the Canadians. It might have been nice for the editors to think of adding relevant worldwide or even just North American numbers to those to add relevance for U.S. readers considering this edition is aimed at a U.S. audience.

As well, there are sections that would have had much greater impact on the reader had Mr. Scully not wallowed in self pity, resorting to melodramatic prose when straight reporting of the facts and events, allowing the reader to draw his or her own conclusions, would have been so much more effective. The best memoirs allow the reader to decide how she or he feels about the events the author retells—as opposed to having the author regurgitate his misery over and over again.

All in all, John Scully’s Am I Sane Yet? An Insider’s Look at Mental Illness is one person’s life story about battling severe depression, alcoholism, and PTSD. Perhaps with the next book Mr. Scully can ground his experience in more general medical information and more specifics about the similar experiences of others to give his work more gravitas and wider appeal.