Always the First to Die: A Novel 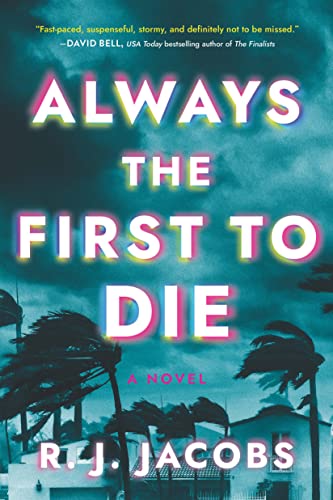 “Always the First to Die is a story evolving around the making of a slasher movie that should itself be made into a film.”

Lexi Plummer is driving to Islamorada in the Florida Keys and into a hurricane. She’s determined to reach her daughter Quinn and bring her home before the eye of Hurricane Stephen, a Category-4 storm, hits the islands and the home of Quinn’s grandfather, horror film director Rick Plummer who is in the process of filming a sequel to his horror masterpiece, Breathless.

“I play our last conversation over and over in my head as I drive. I hadn’t heard from her at all yesterday, nor had I seen anything of hers on social media. Quinn had told me she would be on a school trip for dates that were slightly too specific—the exact dates of the visit with her grandfather I’d forbidden her to take. How could I have been so utterly, stupidly naïve?”

Twenty years before, a teenaged Lexi had, on a whim, been a bit player in the original Breathless film. That was where she met Rick’s son, Cam, got a featured part in the movie—she became the girl who is the first to die—and eventually she and Cam married. She also witnessed the events leading to the deaths on the set and the leading lady’s mental breakdown, giving rise to the public calling the film “cursed.”

“Can a place hold a memory? I realize I’ve always believed it could. Just like the memory I have of what I saw at the Pinecrest, of the explosion that killed Doug when I was Quinn’s age.

Luke only knows part of the story.

The year before, Cam had returned to the Keys to write the book he hoped would make him known on his own merits and not merely as Rick Plummer’s son.

“He’d wanted to be a novelist, after all, and always wrestled with his life being separate from the movies Rick made.”

Then he’d gone off in the family boat and never returned. The boat was discovered adrift, but his body was never recovered.

“They found the boat, Lexi,” Rick said. “Capsized, carried a mile offshore by the current.”

I covered my mouth with my hand. “He was on it? Are you sure?” Already, hot tears were filling my eyes.

“No one’s sure of anything right now.”

Lexi knows why Quinn lied about going on a trip with friends instead of that she was going to the Keys. She’s never believed her father is dead and is determined to find him.

“She never believed Cam died. That was why she healed so fast, shifting back from being moody and abrasive to being her old self. She came down here looking for proof he’s alive, but whatever she found, I’m not strong enough to handle it.”

Lexi and the eye of the storm arrive at the same time. With the appearance of some of the original cast and crew, events soon begin following the original script, but that lasts only so long. Soon Lexi will learn that the truth of what happened on the set 20 years before is much, much deadlier than any fiction a screenwriter could create.

Always the First to Die is a story evolving around the making of a slasher movie that should itself be made into a film.

Well-characterized and filled with emotion-producing dialogue and the description of the Florida Keys and the damage done by the hurricane reading like an eyewitness account, the story is told from the killer’s point of view as well as Lexi’s. There are also flashbacks giving us the facts behind the tragedy happening twenty years before that gave Breathless its notoriety. All are insightful and dramatic, and the only objection one might raise is when protagonist and antagonist are giving their stories, it’s in first-person present, which some readers alternately find annoying and confusing.

R. J. Jacobs' novel is a gem that readers of thrillers as well as slasher/horror film aficionados will enjoy, with a tangent of a twist no one expects that will keep both types of audiences begging for more.