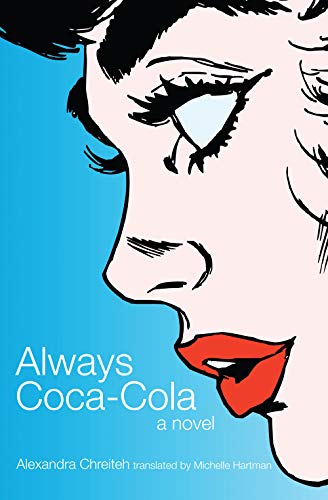 Abeer, the main character, is studying at the American University in Beirut. The book is told from her viewpoint, but the plot unfolds around her two good friends, Yana and Yasmine. These friends challenge Abeer’s traditional Arabic values with their more western-feminist views. They also risk shaming Abeer because Yana is single and pregnant, and Yasmine is unabashedly butch. Abeer loves her friends, her Starbucks coffee, and her university classes, but she’s still an Arab girl.

Always Coca-Cola’s best moments illustrate the fault-line between tradition and modernity—a fault-line that Abeer must straddle. In one of the book’s more moving scenes, Ameer holds in her period blood during a quest for a feminine pad even after her friend has given her a tampon. She believes the tampon will compromise her virginity.

In another powerful scene, a male friend shames Abeer for her friendship with (single and pregnant) Yana. He shouts: “A young woman isn’t complete unless three attributes are found in her, and you do can’t do away with any one of them either. She must be a virgin, a wife, and a mother—in that order of course!” The authors’ greatest talent may be her ability to use a little scene to make a powerful point.

Abeer’s family is important to the book, but only as a foreboding off-stage presence. Abeer tells us about her strict father, but readers never meet him. A teeming family function, visited briefly, is the only exposure readers have to Abeer’s family (besides gossipy cousin Halla). Abeer tells readers how her family informs her decisions, but the reader never experiences it. A couple of scenes between Abeer and her parents might have added a great deal of depth to Always Coca-Cola.

Despite the setting and intelligent set-up, Always Coca-Cola steers clear of Lebanon’s stormy political situation. Police checkpoints, power outages, and rubble from past wars are nothing more than briefly mentioned inconveniences. Lebanon’s fragile emerging democracy is never discussed. For pages at a time, the American reader could easily forget that Always Coca-Cola is even set in Lebanon. The femininity vs. feminism tension at the book’s core could be examined just as easily in numerous settings, even certain subcultures within the U.S.

However, other parts of Always Coca-Cola did not easily transition from Lebanon to the U.S. The book has no chapters or breaks, and American readers might miss these landmarks of progress and closure. Also, jokes and wordplay that are, no doubt, funny in Lebanon do not translate well. Indeed, large parts of the translation read just a little awkwardly.

Always Coca-Cola is about the simmering tension between tradition and modernity as experienced by young middle-class Lebanese women. This is a great premise for a novel. Though the final English-language product is probably less than the Arabic original, Always Coca-Cola is still an intelligent little book and worth the read.