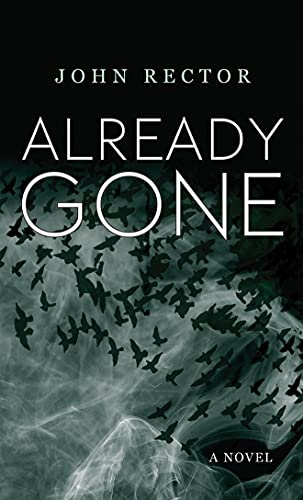 “Throughout this dark, suspense-filled story there is no way to predict what will happen next.”

In Already Gone we find the book’s protagonist, Jake Reese, at a meeting with his university colleagues. The meeting takes place in a bar, and when Jake leaves before his friends do, he’s accosted by two strangers who cut off one of his fingers. Strange, macabre beginning to be sure, but the horror doesn’t end there. Throughout this dark, suspense-filled story there is no way to predict what will happen next.

The author writes in the first-person point of view, a technique that’s difficult to pull off, but John Rector does it in a manner that piques our curiosity at every page turn and leaves us hanging at each chapter ending.

Despite Jake’s attempt to start a new life and forget about his shady past, his history comes back to haunt him. His wife of just one year turns up missing shortly after Jake’s finger is severed, and as he embarks on a journey to find her, bad things become routine in his life. He soon finds himself unable to continue teaching, and as the police investigation into finding his attackers stalls, he develops an adversarial relationship with the investigating detective.

I lost track of the number of plot twists in this intriguing book and finally decided to quit guessing about who did what, and why. Trying to figure out Rector’s storyline and where it might lead next is like walking into a labyrinth of perplexities.

One minor distraction: The author refers to a gun’s magazine as a “clip.” This is a common error many writers make, but since it was not a police procedural book, I could brush it off as the character’s mistake rather than the author’s.

As calamity after calamity occurred, one would hardly expect a happy ending. And in fact the ending is somewhat inchoate, but perhaps that is by design so that Jake Reese can lead us on another horrifying journey sometime in the future.

Already Gone is a well-written novel with plenty of action and complex characters that defy definition. The pace is fast, the action nonstop, and the plot is thick and taut. Very much looking forward to more books by John Rector.