The Allure of Chanel (Pushkin Collection) 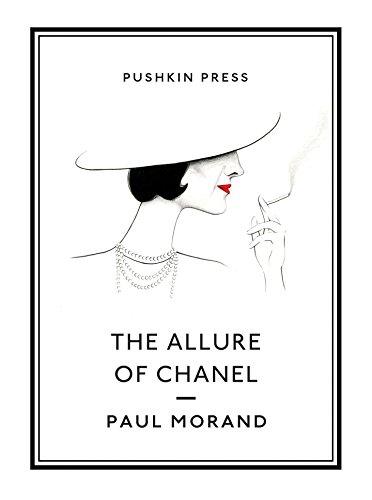 Have you ever wondered what it would be like to spend a weekend with Coco Chanel? Just the two of you engaged in an extended conversation, which is really her recounting some of her most memorable times of her youth and later life?

There have been many words and hours devoted to the life of Coco Chanel, a few movies, and even a few television movies and specials, but none is as intimate as this story of her life through 1938 or so. The beauty of this book is that these are her words, her version of her life as told to one of her dear friends and also the author of this particular book. The book has been translated and redacted from original conversations between Mademoiselle Chanel and Mr. Durand. The entire manuscript was discovered upon Mr. Durand’s death in 1975.

Not only does this format engage you, but its words also cause you to laugh out loud at the very words that she uttered to describe herself, her acumen as a designer, her business, her lovers, and her philosophy of life. She was an original in so many ways and so very modern—yet so very provincial in many of her beliefs. “I am never satisfied with myself, so why should I be satisfied with others?” or “I judge people according to the what they spend.” or “the only thing I like spending is my strength.” On fashion, “expensive jewelry does not improve the woman who wears it . . . if she is plain she shall remain plain.”

Anyone who has a curiosity about fashion and the minds of those who create should read the story of Mademoiselle Chanel with great care and a very open mind as she is a voice which is heard to this day in the world of fashion and a voice that should actually be listened to more carefully in these modern times. I had no idea that she was so full of “bon mots” and so free with her very rigid philosophies regarding all segments of life. From all other accounts of her life, she is always portrayed as the lonely, if not slightly bitter, workaholic, when in fact she was quite sanguine about her work, her life, her homes, her lovers, and just about anything you can think of. She was simply never at a loss for an opinion.

Lastly one must take note that the current designer for Chanel, Karl Lagerfeld, has illustrated the book with the same chic and élan as is echoed in the fashion of Chanel. There is a reason that the house still exists, and I do believe that Mr. Lagerfeld has allowed himself to become one with Coco—a fact that would certainly have agreed with her as she stated: “I only like what I create, and I only create if I forget.”