Allow Me to Retort: A Black Guy’s Guide to the Constitution 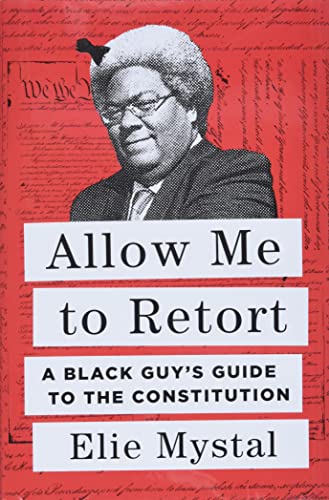 It is impossible to enjoy reading the constitution more than through the searing perspective of the brilliant Twainesque humor of Elie Mystal in Allow Me to Retort: A Black Guy’s Guide to the Constitution.

There is literally something for every literate person in this treatise, from Socrates’ demise and a reference to Desiree Fairooz, a woman who was arrested and charged with disrupting Congress for laughing at the ridiculous statement a senator made in Jeff Session’s confirmation hearing (remember him?). Senator-whose-name-shall not be mentioned praised racist Sessions for his record of having treated all Americans equally under the law. Equally as long as you were not Black. Brilliant Mystal sums it up here,

“The real cancel culture is the one practiced by conservatives. They are the ones leading the assault on the First Amendment and freedom of speech.”

In addressing the Second Amendment, he coins the phrase “ammosexuals as the scientific categorization of a person who fetishizes firearms and can’t win at Scrabble.” Or “We live in the most violent industrialized nation on earth because too many guys can’t admit they need a night-light.” Plain speaking is the jam for Mystal, calling out the foundations of slavery and its manifestation in the constitution by men who owned slaves. Southerners were worried about a slave uprising if they lacked enough fire power against those humans they had raped and tortured for decades. And he goes further, “Southerners don’t want the Second Amendment to evolve because they really don’t have a problem with original slavers purpose of the thing.”

Most poignantly, when he discusses police stops and the violence meted out by law enforcement to non-whites he succinctly states police officers are agents of the state, and because they can literally execute people on sight, it is not too much to hold them to a higher standard beyond what they think is reasonable.

Mystal’s reference to Hobbesian’s right to self-defense leads to the conclusion “Don’t live in a stand your ground state if you aren’t white.” Of course, any sentient analysis of the shredding of the constitution with rulings by Supreme Court Justices, which can only be viewed as racist, homophobic, or misogynistic is depressing. But Mystal finds ways to cram humor into his riveting recount of the origins and bastardization of the US Constitution. His riff on the idea of jury trials offering fairness, “I cannot randomly get twelve people to read a whole article before calling me an asshole based on my headline. But I’m supposed to trust twelve randos pulled off the street to figure out if I have murdered someone?”

Mystal hits pretty close to home when he reveals that women were summarily excluded from serving on juries until 1994. Sandra Day O’Connor and Ruth Bader Ginsburg had to listen to half the Supreme Court men argue why women should be excluded from juries.

His discussion of cruelty and the death penalty is replete with beautiful verse. On solitary confinement he says, “It’s the promulgation of evil hiding behind the banality of cowardice.” Current Justice Gorsuch adds his own touch by qualifying what cruel and unusual punishment means; he is apparently fine with cruelty to others, unless it metes out his brand of unusual justice.

Mystal’s examples of equal protection and due process provide hope, in particular when applied to the women whose bodies are not chattel for the state. Women cannot under the Fourteenth Amendment, be forced by any state to have their privileges or immunities as citizens abridged. In other words, women constitutionally cannot be forced to carry a child and give birth. Women, being people, and citizens of the United States. His observations on childbirth and pregnancy are also great, especially where he muses, “He decided not to go south during the birth of his sons.”

If you are a sentient being with the capability of empathy and a strong gut, you will enjoy Mystal’s take down of the constitution.