All the Things We Never Knew: Chasing the Chaos of Mental Illness 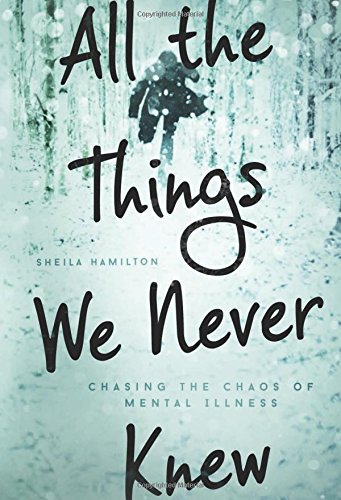 Sheila Hamilton and her daughter Sophie suffered unimaginably and yet found their way to wholeness again. Both were entirely upended by the behavior and suicide of their husband and father, David. What they endured is unspeakable. Not having a safe base for living in an already conflicted world truly tests the human spirit.

Not only did David commit suicide, there was a protracted hunt for his body after he left the city behind with his intentions fairly clear to those who knew him. It was winter, and his family couldn’t help but imagine him out in the cold, alone. Eventually he was found, and it was said he finally discovered his peace after he killed himself; however, that peace wasn’t extant for his wife and daughter: Not only did he not leave a note, but he left them heavily in debt.

This family deserves empathy and understanding, but parts of this memoir are very difficult to understand. Not to underestimate someone’s pain, but questions arise as to the premise of the book and the idea that he was dead “within six weeks of a formal diagnosis of bipolar disorder.” Formal is the key word here, because it’s clear from the onset that David was suffering from a mental disorder for a very long time.

It’s important to note that Sheila Hamilton is a noted radio and TV personality in the Portland area, highly successful in a cutthroat business. From childhood to the height of her career, she was successful precisely because she knew people and reflected a sweet and happy personality that her fans found relatable. She is a smart cookie.

Therefore, reading her describe her courtship and early marriage to David is terribly confusing. From their initial meeting at a coffee shop, David seemed too good to be true. He had some quirks, which is something all of us have to own up to. But their relationship was fraught with periods of unusual behavior on his part. Long disappearances, secretiveness, and constant personal disorganization despite a successful business were troubling events. Interactions with his own father were not of the warm and fuzzy nature.

It wasn’t long before he was cheating on her (she found out) and even taking his child on his rendezvous with women. Asking one of the child-care providers on a date was less than shocking. He had a penchant for escapism. At times, as well, he would become extremely irate and irrational over the noise of cars on a distant street. It’s clear he was troubled, and reading it makes you wonder why his family did not seek help sooner.

This is why the premise of his sickness being discovered “only six weeks” before his death is inaccurate: His family was enduring his pain along with him for much longer. Years. This presentation adds a certain scare tactic to the memoir, as it asks readers to consider mental issues as something that can come on rapidly, without warning. Yet the details shared are themselves revealing as to how long he suffered and how some forms of intervention may have helped.

Hamilton is from a large family in Utah, and has no doubt spent time with hundreds of friends, coworkers, and acquaintances in her life. She had to know what rational behavior was and what wasn’t. How could Hamilton, given her knowledge of people, not see it? She cannot be blamed in any way, of course, as David was the one who was sick and put her through countless incidents of infidelity and pain. Was it the stigma of mental health problems that made it difficult to broach the subject or was she in denial, given his tremendous talent and charm?

She clearly had a close relationship with her daughter and was able to provide stability and certain life luxuries that may have made it easier for Sophie to endure what may have seemed odd in her young mind. Perhaps focusing on Sophie helped Hamilton avoid the more painful thoughts of David and her helplessness in dealing with him.

In any case, Hamilton ends most of the chapters with an informative page on mental health statistics and traits so that readers may see what she didn’t. One of them, entitled “The Escape Theory of Suicide” is especially interesting. In it, one psychologist noted that “most people who kill themselves actually lived better-than-average lives” but created “unreasonable standards for happiness.” This statistic is prefaced with the shocking detail that men commit four out of every five suicides in the U.S.

The memoir ends with numerous resources for those with questions to investigate. The array of organizations designed to help different sorts of people with varying sorts of mental health issues is a positive step in helping to decrease the horrific statistics. Hamilton is a brave woman to come forward with her story and potentially help other families.