All the Secret Places: A Gin Sullivan Mystery 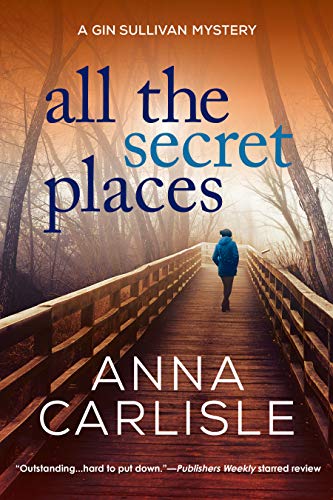 In this second installment of the Gin Sullivan Mystery series, Gin is on a leave of absence from her medical examiner's position in Chicago. She is back in her hometown of Trumbull, PA, where she helped solve the death of her younger sister.

She reunites with her high school love, Jake Crosby, who has had a tough life having gotten into trouble when young, but now he is trying to redeem himself by constructing upscale residences on acreage he purchased in an estate sale. One of the luxurious homes is about completed; Jake’s hoping his financial worries will cease, but things go awry when he gets an early-morning phone call stating the house is engulfed in flames.

Jake hurries to the scene, frustrated and angry. Did someone set this fire on purpose? If so, why? Is this the work of the disgruntled son who did not inherit this parcel of land after his mother's death? Thinking things couldn't get worse Jake learns they also have discovered the remains of a dead body on the property.

Because the corpse appears to have been buried a long time due to decomposition, they assume this may be a victim of the Civil War. If this is the situation, Jake's whole project would be shut down and the area declared a historical site.

While Jake frets over his future and a possible arrest, Gin works as a consultant for the local medical examiner, which can appear to be a conflict of interest, considering what happened on Jake's property.

Detective Stillman assigned to the case is rude to both Jake and Gin, especially because he is out for Jake. He rubs Gin the wrong way, definitely not thrilled dealing with a woman "sticking her nose in his business!"

The two live together in Jake's home, yet the closeness they once shared is strained. Jake keeps things close to the vest and will not confide in Gin, and he somewhat resents Gin for coming from a well-to-do family, where he struggles for every cent. But Gin persists to clear Jake, which doesn't sit well with him and causes them friction as shown here:

"'I'm trying to help you!" Gin protested. Meanwhile, I find out you've been talking to a bankruptcy lawyer without even discussing it with me first!'"

A blank expression settled onto Jake's face. "'I hate to break it to you, but this is just the way it goes for regular folks. Sometimes you can't buy your way out of your problems. . . .'"

". . . Gin stood rooted in place for a few moments, fuming. He was determined to go it alone, which meant that she could either accept the cold, empty silence between them for however long it took Jake to snap out of his funk—or she could leave. There was a third option—the most difficult, the one that would require the most of her.

"She could keep trying to convince him to let her in. But until Jake saw a way out of his current problems, there was no way he would be receptive. Which meant that their relationship was riding on the investigation."

This fast-paced whodunit which easily stands by itself offering several subplots as well as offering up both Gin's and Jake's personal angst for examination. Mysteries, as well as dangerous situations, abound, piquing curiosity up to the unanticipated conclusion.