All the Houses: A Novel 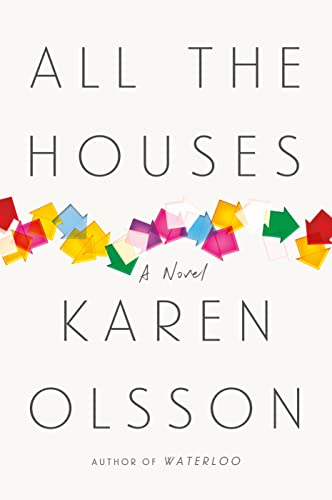 Helen, a would-be writer living in LA, travels back to her hometown when her father, Tim, experiences heart trouble. It’s a familiar story revitalized by a new context: the town is Washington, DC, and the father a former government employee who lost his job over the Iran–Contra Affair. All the Houses, in this case, includes the White House.

It’s twenty years after the scandal, and the US has invaded Iraq. One of Tim’s former colleagues releases a memoir. Suddenly aware of her father’s mortality and suffering a general crisis of self-confidence—in her love-life, in her career choices—Helen examines her family’s twin pasts, the private and the political, with a focus on the place they intersected: Tim.

Karen Olsson is an incisive commentator on the telling details of family interactions. “Courtney came in, opened the refrigerator, and seemed to ask the refrigerator how it was doing.”  The prose is amiable, informal (there are exclamation points!), and often sharply funny. Olsson is at her best when bayoneting platitudes:

“To say he was the same, what does that mean? . . . A river I stepped in again, maybe. Or a pile of shit—I would argue that you actually can step in the same pile of shit twice.”

The juxtaposition of personal and political means that All the Houses is a family novel in which the usual slices of life—shopping trips, dinners at home—are potentially spun into reflections not just about the apparent inflexibility of sibling dynamics, but about the inescapability of our national dynamics, as well.

Although Iran–Contra is a constant theme, it is only a secondary plot device. Olsson has kept the narrative stakes strictly personal and very low-key: Helen might lose the friendship of Nina, a teenager she likes but barely knows; relations with her uptight older sister, Courtney, might remain strained; it’s possible her casual lover isn’t right for her.

With few exceptions—Nina’s Turkish boyfriend, Samed, faces deportation— every character has a list of mostly similar concerns, the kind they might tell their therapists on a slow day. Even Tim’s role in the Iran–Contra scandal—small enough that he wasn’t tried for anything, let alone convicted—doesn’t offer much tension. As Courtney points out, everyone who was fired got rich afterward in the private sector.

She also implies that they didn’t do anything all that wrong, which is something of a motif: there’s no real maliciousness in All the Houses, just people doing their best, sometimes misguidedly, sometimes foolishly, but without malice or wickedness. It’s a generous view of human nature, but one that reduces the force of every possible revelation, especially given the novel’s structure: the drama seemingly lurks in the long flashbacks to the ’80s, but we have already met all the characters and everyone’s doing relatively well, so why worry?

Even family friend Dick Mitchell’s suicide is undermined as a possible source of dramatic anticipation. We learn of it too early, and anyway are told more than once that he was off his meds, making it another one of those things for which no one is really to blame.

If Olsson hoped that folding a well-known political scandal into her plot would supply the heft missing from the Helen’s story, the scheme backfired. Because the family drama is yoked to a national one, the general lack of narrative urgency is even more obvious, particularly in the failure to establish a meaningful connection between Tim’s Iran–Contra experience and America’s most recent invasion of Iraq. Meanwhile, any book about politics, even peripherally, even if lighthearted, cannot help but become a political statement—in this case, an acquittal by lacuna of a government that broke the law.

Passages from Helen’s abortive manuscript about her father’s role in Iran–Contra recount small slights, personal grousing, and media misrepresentation, but barely anything about the larger political forces at play. Given that All the Houses is set against an occupied Iraq (let alone current fears about the state of Iran’s armories), one might expect that the illegal sale to the Islamic Republic of surface-to-air missiles by US government officials would receive serious attention.

Instead, the whole thing is treated as not much more than a prank gone wrong. There are scenes (witty and well-written) portraying Contra leaders as disarmingly phlegmatic, and a funny tangent about visiting a shady New Orleans warehouse that is a weak link in the supply-chain. Oliver North is admired for his energy and dedication, and if he is not exactly praised, neither is he condemned. The fact that people were being killed at either end of the transaction is never once addressed.

Helen herself notes more than once how little people care. Even her family can’t see the sense in rehashing a forgotten incident, and say as much when they learn she is writing about Tim’s experiences. “Only . . . an Iran–Contra opera,” Helen worries, could be less interesting than a novel on the topic. Perhaps Olsson’s point—although likely one better suited to satire than a domestic chamber play—is precisely that: Plus ça change.

First you arm them, then you fight them, whoever “they” are this year: anti-Castro Mafiosi, anti-Soviet jihadists, anti-Ba’athist insurgents, people who clearly hate something we supposedly hate but don’t love what we supposedly love. Meanwhile our lives go on, just as before.