All This Could Be Different: A Novel 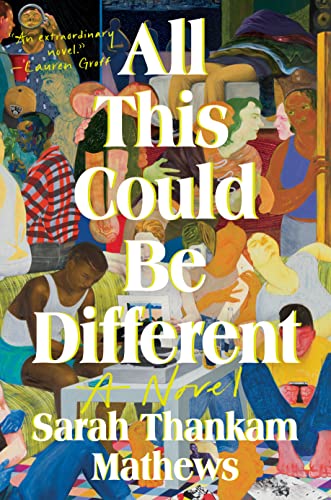 “I did not know how to explain this stubborn love for my parents that I staggered under, iridescent and gigantic and veined with a terrible grief, grief for the ways their lives had been compost for my own.”

All This Could Be Different will unexpectedly destroyed the reader. On a surface level, it is a bildungsroman for queer millennials, complete with a reference to Goethe, capturing the mundanity and fragility of existence under capitalism, the ever-present threat of poverty, and the incandescent promise of joy.

Sarah Thankam Mathews’ protagonist, Sneha, discusses spreadsheets and the cost of drinks and listens to her friends as they debate Marxist and queer theory. She experiences the realities of the immigrant experience, from exploitative employers and landlords to the precarious balancing act of navigating two worlds. But what sets Mathews’ novel apart is the brittle, aching beauty of her prose, which knifes through the reader with the force of a revelation.

Sneha’s narration vacillates between caustically irreverent to sentences that snare the reader with truth: “Seemed like the only other person I knew who had the same thin whine of pain in the background of her brain, some fraction of always.” Mathews captures that pain and gives it value.

Toward the beginning of the novel, when asked about her family, Sneha reflects, “I stared off into the low dark, thinking about how to shape a life’s great turbulence into a story.” While not self-referential, Sneha’s character grapples with the quintessential project of any good writing: how to shape life into story, imbuing it with meaning.

Mathews captures that turbulence. Over the course of the novel, Sneha, surrounded by a compelling cast of supporting characters, finds love (and loses it), finds hope (and loses it, only to find it again), finds community (and learns how to sustain it), and by the story’s end, at last finds the prickly, raw, unbearably vulnerable wound of herself—and where to turn for healing.

Set in Milwuakee, the novel also explores community and place, using Sneha’s slightly cynical lens juxtaposed with her more ideological friends’ perspectives, to give an unflinching portrayal of the work involved in building and maintaining the precious, radical act of friendship.

“But nobody consoles you after a rupture with a beloved friend. There are few movies ideal for watching while your tears salt pints of ice cream, no articles in women’s magazines that you can skim at the hairdresser’s. You have only the ache. No script to accompany it. No ritual to give it a shape.”

And yet, Mathews does give readers a shape to the acute pain of adult friendships. All This Could Be Different is, at its heart, a novel about friendship and found family. Sneha struggles to let her friends and romantic partners into the places of herself she associates with shame. Yet as that shame festers, finally manifesting itself in physical symptoms and complicating her relationship with the woman she loves, Mathews brings the disparate narrative threads of the novel together, reaffirming the reader’s faith in humanity despite—and because—of Sneha’s reluctance to recognize it.

The novel is also frankly hilarious. The humor is quintessentially millennial, speaking through a generational lens that will nonetheless appeal to a wider readership, and is also subversive. The text exchanges are real and rich with character voice. The social commentary is bitingly funny. The repartee between friends invites the reader in without ever feeling forced. Mathews uses this humor to skillfully delve into the many facets of her characters’ personalities, revealing the ways in which we hide from each other as well as share ourselves.

All This Could Be Different is perfect for readers interested in the complexities of coming of age in this modern world. While some readers might find the social justice narratives distracting, others will recognize how skillfully Mathews uses the social commentary of the supporting cast to complicate the reader’s understanding of Sneha’s experiences. Never is the novel naively idealistic, nor does it veer too deeply into trauma. The result is a balance of grief and joy that readers will find both cathartic and inspiring—because Mathews is right. All this could be different.